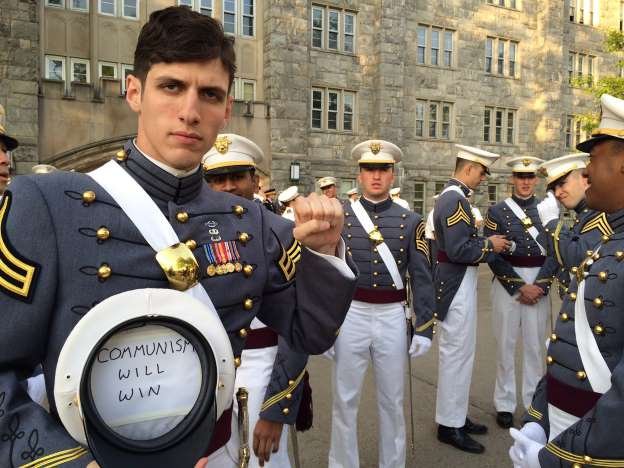 The West Point graduate, who last year posed in a picture holding a cap that had “Communism will win” written inside, is officially out of the U.S. Army with an other-than-honorable discharge.

Spenser Rapone rocked the military community last year after his social media posts were revealed, showing him wearing a Che Guevara shirt underneath his military uniform.

He is no longer part of the U.S. military after top brass at Fort Drum’s 10th Mountain Division accepted his resignation Monday after an earlier warning for “conduct unbecoming of an officer.” He’s leaving the military with an other-than-honorable discharge.

Army officials condemned the cadet last year and opened an investigation into his social media activity. “Second Lieutenant Rapone’s actions in no way reflect the values of the U.S. Military Academy or the U.S. Army,” an Army statement read.

His open advocacy of communism attracted the criticism from Florida Sen. Marco Rubio who then urged the U.S. military to dismiss Rapone for supporting the country’s enemies.

The now-former cadet said the probe found him advocating for socialist revolution online and disparaging high-ranking officers and U.S. officials. The Army said it took “appropriate action” in dealing with the situation.

But Rapone remains unabashed, posting a picture on Monday showing him the middle finger at a sign at the entrance to Fort Drum, captioned with “One final salute.”

He also remains committed to the far-left causes, saying he considers himself “a revolutionary socialist” and urged others to join him in his revolution,

“I would encourage all soldiers who have a conscience to lay down their arms and join me and so many others who are willing to stop serving the agents of imperialism and join us in a revolutionary movement,” he said.

Rubio cheered the departure of Rapone. “While in uniform, Spenser Rapone advocated for communism and political violence, and expressed support and sympathy for enemies of the United States,” the Senator said on Monday. “I’m glad to see that they have given him an ‘other-than-honorable’ discharge.”

Military experts say it’s rare for an officer out of West Point to receive an other-than-honorable discharge. Greg Rinckey, an attorney specializing in military law, claimed that this opens an opportunity for the military to seek money back from Rapone for the education he received as he didn’t fulfil the five-year service obligation for all the graduates.

“I knew there could be repercussions,” said Rapone, who’s becoming a prominent far-left advocate and will be speaking at a conference for socialism next month. “Of course my military career is dead in the water. On the other hand, many people reached out and showed me support. There are a lot of veterans both active duty and not that feel like I do.”