Related: Trump’s lawyers wonder: If Pelosi never delivers the articles of impeachment, does that mean he’s not really impeached?

More: “Trump Isn’t Impeached Until the House Tells the Senate, According to the Constitution, impeachment is a process, not a vote” – says Harvard law professor Noah Feldman, who testified before the House Judiciary Committee at the start of the month (and has been pro-impeachment since month two of the Trump presidency.)

As Iowahawk tweets, for the moment, we’re in “Schrodinger’s Cat” territory.

It has now been consecrated in The Ark of the Impeachment, and on its way to be buried forever in a secret subterranean snake vault in the desert

UPDATE (FROM GLENN): Everyone knows impeachment isn’t official until the Marshal of the Supreme Court delivers the papers while riding on Unicorn-back.

Of course, if Trump is re-elected but the Dems take the Senate and keep the House (hey, it could happen), they’ll probably try to deliver the papers then. Pretty sure an impeachment vote expires with the Congress that voted it, but I’m sure they can find some lefty lawprofs to argue that it’s still valid. (Though if they’re dumb enough to try that, which until today I would have doubted, they may get Cromwelled, with Trump simply refusing to treat them as legitimate, and might even deserve it; we’ve seen nothing like this wilful pollution of an American institution, even in the worst periods of American political division.)

Pelosi insisted on Thursday that before she will send the Republican-led Senate the articles of impeachment her Democrat-dominated chamber approved against President Trump, GOP leaders must provide more detail about how they will handle the trial, and she’s insisting on more witnesses, testimony and documents.

“Articles of impeachment were not meant to be articles of barter,” said impeachment expert Jonathan Turley, who testified before the House during the proceedings. “Just as the House elected not to seek to compel the testimony of critical witnesses, the Senate can make the same decision for its own house.”

Harvard Law professor emeritus Alan Dershowitz, slamming the impeachment itself as “unconstitutional,” said of Pelosi’s ploy, “It’s an unconstitutional gambit and it won’t work. … It would be like indicting someone and then just not having a trial and letting the charges sit there unresolved.”

If it doesn’t go to a Senate trial, he said, “The impeachment should be struck as void.”

Civil rights attorney lawyer Harvey Silverglate said there’s nothing in the Constitution that compels Pelosi to hand over the articles in a timely matter, or at all. But he described her stance as “kind of bizarre” and a “manipulation of the system.”

“This is sort of the Wild West,” Silverglate said. “I do not consider it a good development that impeachment in the modern era has been becoming more frequent. … The institution of the presidency has suffered a lot.”

Turley added, “The delay also contradicts the Democratic narrative that time is of the essence because this is a ‘crime spree in progress.’”

“It is high time for me to put an end to your sitting in this place, which you have dishonored by your contempt of all virtue, and defiled by your practice of every vice.” Compare Trump’s polling, which isn’t even that great, with Congress’s. It’s really unwise to precipitate this sort of constitutional crisis, especially when you’re holding such a weak hand. And for what? To please angry Twitter activists? Politics may seem like a game of fools, but past a certain point it’s playing with fire.

I’ll add that I’m unpersuaded by the argument that there’s no impeachment until the papers are delivered. The House voted to impeach. The Senate has the sole power to try impeachments, which means any House efforts to meddle with the rules are unconstitutional. And I don’t see why the Senate can’t take official notice of the House vote. The English practice was otherwise, but impeachment is a different animal in English law and history.

Nigel Farage: Voters in the USA will look at the impeachment of Donald Trump last night and conclude: the swamp still needs draining. 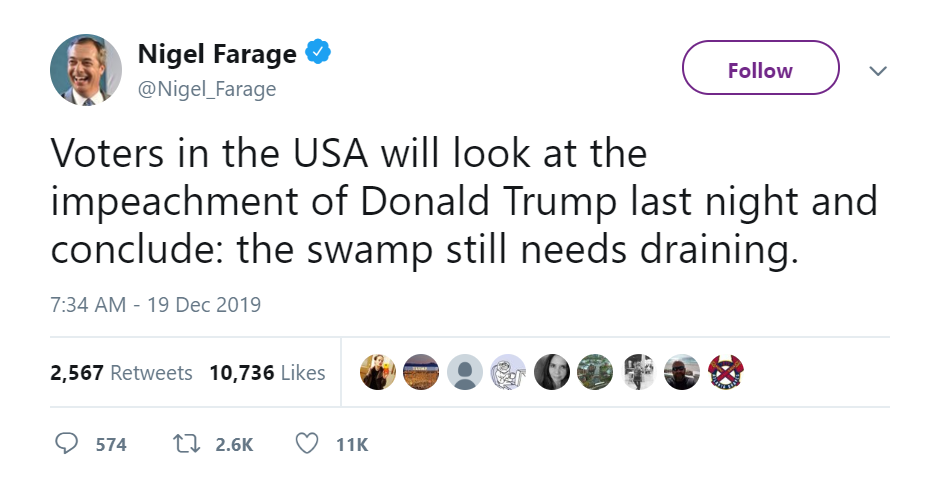