Yesterday brought news that has long been in the offing and it has created quite a stir.

Twelve of Europe’s leading football clubs have today come together to announce they have agreed to establish a new mid-week competition, the Super League, governed by its Founding Clubs.

That begs several questions of which ( and I am not trolling here) the first is how do Arsenal and Spurs ( Tottenham Hotspur) qualify for a Super League? Both have been in the Europa League this season rather than the Champions League and whilst Arsenal are in the semi-finals Spurs were knocked out a while ago.

We find the rationale for the decision below by simply perusing the clubs who have the highest financial revenues according to Deloittes. Suddenly we can see why Arsenal and Spurs are on the guest list. 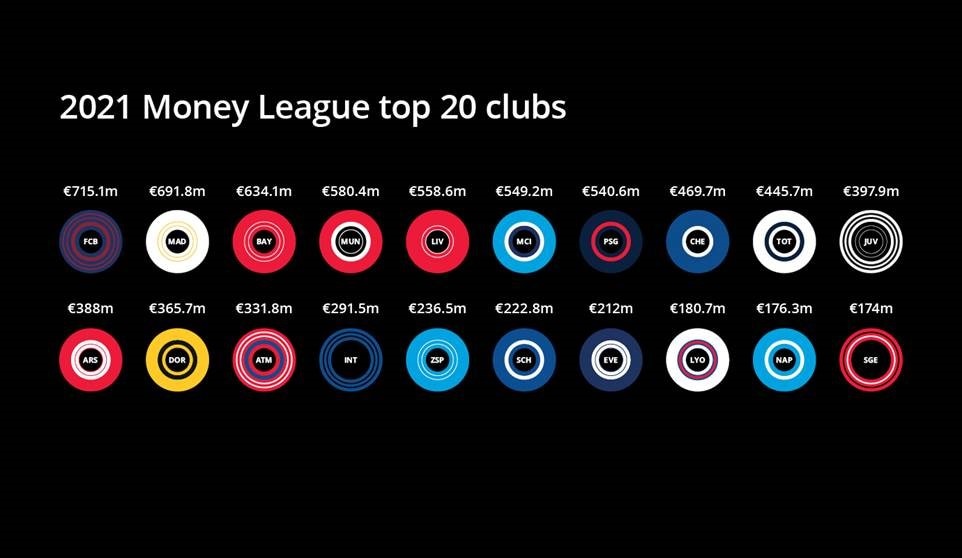 The geographical concentration acquires another context in that we see Paris St. Germain ( France) and most obvious of all Bayern Munich ( Germany) plainly would be in anyone’s definition of a Super League however you define it.

Also the numbers give us the beginnings of a rationale for all of this.

In fact they think the total decline will be this.

We estimate that this year’s Money League clubs will have missed out on over €2 billion in revenue by the end of the 2020/21 season, including amounts foregone in respect of 2019/20, as a result of the COVID-19 pandemic,

Also the analysis reminds us of a feature of the economics of modern football.

a €257m (17%) fall in matchday revenue as matches were first postponed and then either cancelled or resumed behind closed doors;

The fall in revenue seen in 2019/20 was driven by lower broadcast or TV receipts and ticket or matchday revenue is much smaller. So the business model will be designed around broadcast revenue rather than ticket prices. Although in another twist I think we can be sure that ticket prices will be high although of course in the UK they are usually that already for these clubs.

The excellent Swiss Ramble has reminded us of one rationale for the move.

Here’s a clue as to why 12 clubs have signed up for a European Super League: They lost a combined £1.2 billion in 2019/20 before player sales* And that was for a season where only the last 3 months were impacted by COVID… *Liverpool have not yet published their accounts

According to the Swiss Ramble calculation we see quickly why the Italian clubs are involved as AC Milan lost £177 m, Juventus lost £168 million and Inter Milan £117 million. We also see why Barcelona is being much more careful with its spending as it lost £152 million. The only club which looks okay in these numbers is Manchester United with a loss of £13 million and maybe Spurs at £40 million. Although the catch for these two is that this year Spurs will have had only the lower Europa League revenue and Manchester United a sort of hybrid as the were knocked out of the Champions League at an early stage.

This is the next issue and is something that has mostly slipped under the radar. But a world of increasingly zero and in many cases negative bonds yields – this is Europe after all – the official policy has been to encourage debt and the football clubs we are looking at have been singing along with the Kinks.

Or as Swiss Ramble puts it.

If we include other debt, such as the amounts owed to staff, tax authorities, suppliers and other creditors, the total debt of the 12 clubs signing-up to the European Super League is a staggering £7.4 bln.

So a bit over £600 million each. Regular readers may recall the phase when the European Central Bank or ECB bought some Bankia bonds as part of one of its asset purchases. I remember pointing out that as this covered the Ronaldo transfer to them we could see the ECB become a football super power should there be any default. From Football Espana back in 2012.

Real Madrid could face having to give up ownership of both Cristiano Ronaldo and Ricky Kaka to the European Central Bank (ECB), reports El Mundo Deportivo.
A financial crisis at Bankia, the bank that lent money from the ECB to help pay for the players, has meant that a knock-on effect of the transaction could result in Real having to relinquish the rights to both.

If we step forwards to now we have seen another nine years of this with negative interest-rates and bond yields adding to the party since 2015. Also the same themes have been in play in the UK and this brings the biggest debtor in this particular pack into play. Spurs who owe just under £1.2 billion of which some £831 million is the category which paid for their new stadium. The ground redevelopment and in this case replacement has been a UK feature as we note that the north London rivals Arsenal got in early replacing their stadium and now have financial debt of £218 million.

Returning to Spurs we got a reminder of the role of central banks these days last June.

THS has met the criteria set by the Bank of England for the CCFF and has issued £175m of Commercial Paper through this facility.

The CCFF is designed to provide short-term loans at commercial rates during the pandemic and is available to companies that have a strong investment grade rating and make a material contribution to the British economy.

As ever the situation is opaque and complex because Chelsea have relatively little debt but that is because much is operated via its owner Roman Abramovich.

This came in the original statement.

In addition, the competition will be built on a sustainable financial foundation with all Founding Clubs signing up to a spending framework. In exchange for their commitment, Founding Clubs will receive an amount of €3.5 billion solely to support their infrastructure investment plans and to offset the impact of the COVID pandemic.

It looks as though there will be a salary cap at 55% of revenues. Also the funding will be larger according to City-AM.

Arsenal, Chelsea, Liverpool, Manchester City, Manchester United and Tottenham are among the clubs that are set to join the new venture, which has received roughly $6bn (£4.3bn) in backing from JP Morgan.

The terms must be better than existing ones or why do it?

The 12 clubs ( and indeed the other 3 founders when they arrive) must be expecting a situation like this.

It would  be logical for them to remain in their domestic leagues because that is where so much money comes from especially in the UK. For the 3 Spanish clubs that is also true as whilst total revenues are lower they get the lion’s share. The risk is that they get booted out.

I have written before that the football model is not one of the profit maximisation of economic models.It is a managerial structure or in the player’s case a salary maximisation model. This has changed things enormously because I recall going to Stamford Bridge around 1995 and reading that the match-day revenue for the last game of the previous season had exceeded £500,000 for the first time. Now some players get that a week. But the central point is that if you spend what you earn ( and often more) any decline was always going to cause trouble. Previously football only ever saw growth.

The other factor as I have already explained is the era of cheap money which has oiled the borrowing binges. Oh and how they have binged!

Finally we have the issue of greed. Today I note that coming from those who have run things for their own greed such as UEFA and the various national associations. Greed was just fine for UEFA when it was benefiting via the Champions League. Also the proliferation of often fairly meaningless internationals. It was also fine for the Premier League back in 1992.

In a way VAR ( Video Assisted Referee) has symbolised much of the mess. Technology should help like it does in rugby and cricket. But has ended up taking away some of the joy of a goal being scored and led to some ridiculous offside decisions.

On a personal note I would appreciate it if someone would let me know if I still should be supporting Chelsea’s effort to qualify for next year’s Champions League. Thank you.