And unless you’re from the Florida Panhandle, I imagine you haven’t heard of Quincy, Florida, either.

But the two can teach us a lot about investing.

One thing he noticed was no matter how hard the times, people always had money to buy a Coca-Cola.

When shares crashed 50% during a conflict with the sugar industry, Pat kept telling people to buy Coca Cola.

And then the Great Depression hit.

Keeping Your Eye on the Long Run

But something remarkable happened.

As Munroe had learned early on, people would spend their last nickel on a Coca-Cola.

And since the company had $6.5 million in cash (over $100 million in today’s dollars) and no debt, Coca-Cola had no problem paying its dividend.

For the people of Quincy, that meant they could keep their heads above water.

By the late 1940s, Quincy, Florida became the richest town per capita in the entire United States.

Munroe’s sage advice in the 1920s had minted 67 “Coca-Cola Millionaires” in Quincy, Florida.

And many of these early investors still hold their shares today. At least I hope they still do…

Had you bought a Coca-Cola share before the Great Depression and reinvested its dividends, you’d have had over $10 million today. From a single share!

My point is: don’t get carried away by high yields. It’s fool’s gold. Instead, invest in well-capitalized companies that pay steady dividends and hold them. This is the most effective way to actually get rich.

Dividends Add Up over the Long Haul

Since the 2008 financial crisis, the stocks of both companies have more than doubled: 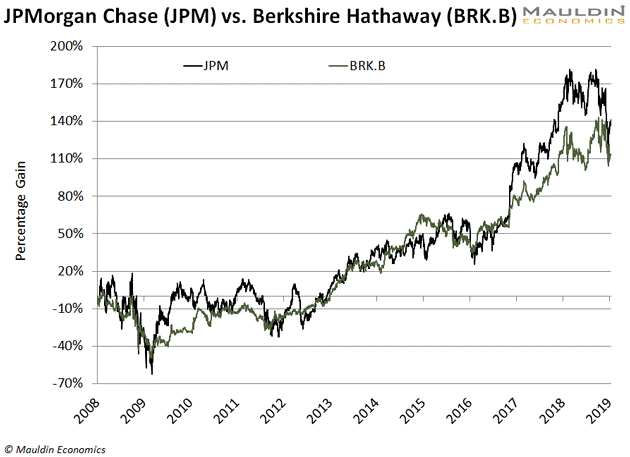 JPMorgan Chase gained 141% during this period compared to 113% for Berkshire Hathaway.

However, when you factor in dividends, JPMorgan Chase crushed Berkshire Hathaway.

Since 2008, JPMorgan Chase has regularly paid a dividend.

The company’s average dividend yield during this period was 2.8%. That’s not a huge dividend, but it adds up over time.

Had you bought shares back then, you would have earned a 39% return in just dividends.

Berkshire Hathaway investors who didn’t earn any dividends are left with the same 113%.

That’s a huge difference. And it’s only over a 10-year period.

Over the past 20 years, JPMorgan Chase has earned investors an 85% return…. from dividends alone!