We can anticipate a federal bailout of pension funds and one-time aid to state and local governments, but bailouts won’t repair the eroding foundations of tax revenues.

As we all know, the federal government can “print” money but state, county and city governments cannot. The Treasury can sell bonds to fund deficit spending, and the Federal Reserve can create currency out of thin air to buy the bonds, so federal spending can increase even as tax revenues crash.

State, county and city governments do not have this printing press. Yes, states and counties can sell municipal bonds for infrastructure projects, but they can’t sell bonds to support General Fund (i.e. everyday government services) expenditures.

As a result, massive declines in State, county and local tax revenues are already baked in as sales and payroll taxes drop and capital gains taxes–an essential source of revenues for many states–are set to collapse along with the stock market.

Longer term, the other primary source of tax revenues–property taxes–will fall off a cliff as the commercial real estate bubble and Housing Bubble #2 implode later this year. Lower sales, lower employment and lower profits all undermine the fundamentals of real estate, and the institutionalization of remote work and education will gut demand for commercial space.

Every locale has a different mix of tax revenues, but since all sources will fall sooner or later, no state or local government will escape the decline in revenues. Sales (excise) and payroll tax revenues will fall first, and capital gains will vanish as stock market losses replace gains.

In states like California that depend heavily on capital gains taxes, the holes being blown in budgets will be catastrophic. Roughly 10% of all General Fund revenues in California flow from capital gains–over $15 billion in the previous fiscal year. As noted in the California State Revenue Estimate 2019-2020:

Were this to drop to previous recession-era lows, that would open a $13 billion hole in tax revenues, completely erasing the state’s $8 billion “rainy day fund” and leaving a $5 billion deficit–a sum that will only increase as sales and payroll taxes decline.

“The highest-income Californians pay a large share of the state’s personal income tax. For the 2016 tax year, the top 1 percent of income earners paid just under 46 percent of personal income taxes. This percentage has been greater than 40 percent in 12 of the past 13 years. Consequently, changes in the income of a relatively small group of taxpayers can have a significant impact on state revenues.”

Many states and counties are increasingly dependent on a dominant revenue source which may well prove to be an Achilles Heel. California has increasingly come to depend on income taxes from high earners (who also garner most of the capital gains as well):

A steep decline in tax revenues isn’t the end of the pain for local government. Public-sector pension funds heavily invested in stocks are absorbing shattering losses that will have to be compensated by higher contributions by cash-strapped taxpayers. If bond yields rise despite central bank interventions, bond holdings could crash along with stocks.

We can anticipate a federal bailout of pension funds and one-time aid to state and local governments, but bailouts won’t repair the eroding foundations of tax revenues. Sales: down. Income: down. Capital gains: down. Vehicle sales: down. Fuel taxes: down. Property taxes: down, once bubble valuations crash to earth.

Cash-strapped taxpayers, many of whom may have lost their jobs, will be in no mood to absorb enormous tax increases to fund insiders, cronies and vested interests.

The gravy train of state and local government spending has just been derailed. The declines in tax revenues will be too steep and too enduring to support the magical-thinking hope that a V-shaped recovery will make all the blown budgets whole next quarter, much less next year. 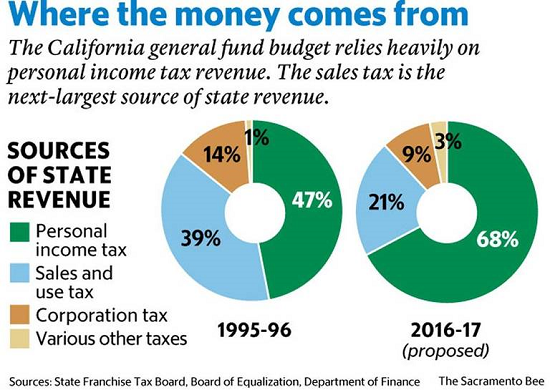