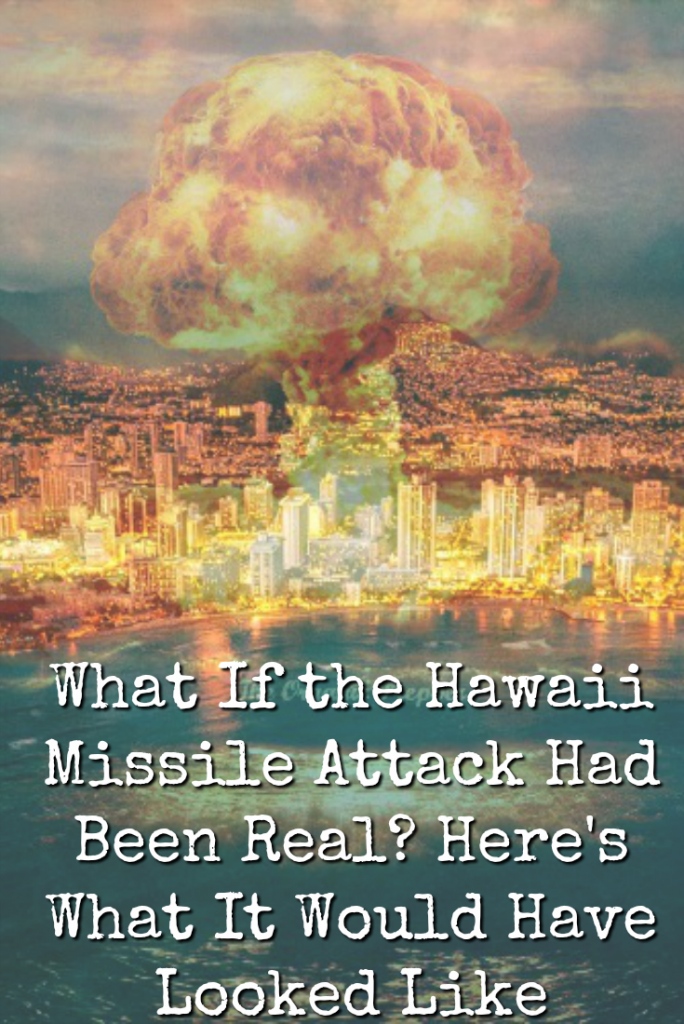 Last weekend, residents of Hawaii were terrified when they were abruptly awakened by a message on their phones and televisions warning them that a missile was inbound and that they should seek shelter immediately. For 38 long minutes, residents were certain that they were about to die. Few were prepared.
For some, the panic was so intense that they were shoving their children into storm drains, screaming, and crying. One man suffered a massive heart attack. (Here’s how to prepare a shelter to go to in the event of a real missile warning.)

But what if the warning had been real?

Defense One is a website that analyzes U.S. defense and national security issues. In a recent article, they delved into what the damage would have really looked like if a missile struck Honolulu, the most likely target in Hawaii.

Defense One’s sources predicted that the warhead would be bigger than the bombs dropped on Hiroshima and Nagasaki. They plugged this information into NukeMap and got some horrifying results.
According to the calculations, 158,460 people would perish immediately. 173,810 people would be immediately injured, (This does not include later injury from the fallout.)

The radius of the fireball would be about .3 miles. The radiation radius would be 1.2 miles and the thermal radiation (which can cause 3rd degree burns) could extend nearly 4 miles.

The analysis suggests that the firestorm after the blast could be as destructive as the blast itself.

“The mountains will reflect the blast back onto the target. Most homes in Honolulu are wood-frame construction, so there is a significant chance of a firestorm following the blast which was what really devastated Hiroshima, much more so than the blast.” (source)

The aftermath would also be devastating.

The radioactive fallout would be present for several weeks, which means people would need to remain sheltered for that length of time to protect themselves. The other issue is that local food and water supplies would be contaminated. Due to Hawaii’s geographic isolation, this could be a major concern.
But there is some good news.

The danger would wane after six to eight weeks for most food and slightly longer for milk. (Fallout can contaminate large areas of grazing pasture and then concentrate in the milk of the cows that ingest it.)  (source)

The scenario above is based on the assumption that the nuclear missile will be detonated in the air. If it instead detonates at the surface, the fallout would be much, much worse.  Experts are divided in their opinions of which kind of strike is more likely.

It would be difficult to get aid to Hawaii.

Due to the geographic isolation, it would be several days before aid was able to get to the islands.

“Not only will people be sheltering in place, it will be nearly impossible to get rescue workers in there for a couple of days. That’s a huge problem. First responders all have survey meters to check the dosage as they go in, and if it’s above a certain level, they just don’t go any further.” (source)

As well, if all the food and water was contaminated, assistance would not be immediately available. Logistics mean that the cost and time to get  supplies there would make rescue efforts even more difficult.

You should be prepared.

If you’re at Ground Zero, there is little chance of survival. Further out, however, there is a very good possibility of survival if you know what to do ahead of time.