Sometimes it helps to look back so let us dip into Yahoo Finance from the 17th of December last year.

Home price growth has slowed for six consecutive months since April, according to the S&P CoreLogic Case-Shiller national home price index. And for the first time in a year, annual price growth fell below 6%, dropping to 5.7% and 5.5%, in August and September, respectively. October home price results will be released later this month.

So we see what has in many places become a familiar pattern as housing markets lose some of their growth. There was and indeed is a consequence of this.

“A couple of years of home prices running twice the rate of home income growth leads to affordability challenges,” said Mortgage Bankers Association Chief Economist Mike Fratantoni. “If you’re a buyer in 2019, you won’t see home price running away from you at the same speed in 2018.”

I think he means wages when he says “home income growth” but he is making a point which we have seen in many places where house price growth has soared and decoupled from wage growth. This has been oil by the way that central banks slashed official interest-rates which reduced mortgage-rates and then also indulged in large-scale bond buying which in the US included Mortgage-Backed Securities to further reduce mortgage-rates. This meant that affordability improved as long as you were willing to look away from higher debt burdens and the implication that should interest-rates rise the song “the heat is on” would start playing very quickly.

Or if you wish to consider that in chart form Yahoo Finance helped us out. 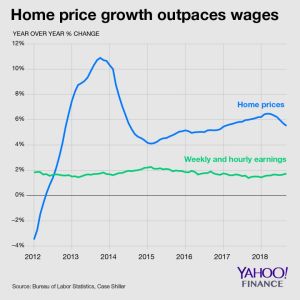 That is a chart to gladden a central bankers heart as it shows that the policy measures enacted turned house prices around and led to strong growth in them. The double-digit growth of late 2013 and early 2014 will have then scrambling up into their Ivory Towers to calculate the wealth effects. But the problem is that compared to wage growth they moved away at 8% per annum back then and the minimum since has been 2% per annum. That means that a supposed solution to house prices being too high and contributing to an economic crash has been to make them higher again especially relative to wages.

What about house price growth now?

Yesterday provided us with an update.

So there has been a slowing in the rate of growth which is reflected here.

“During the first two months of the year, home-price growth continued to decelerate,” said Dr. Frank Nothaft, chief economist for CoreLogic. “This is the opposite of what we saw the last two years when price growth accelerated early.

Looking ahead they do however expect something of a pick-up.

“With the Federal Reserve’s announcement to keep short-term interest rates where they are for the rest of the year, we expect mortgage rates to remain low and be a boost for the spring buying season. A strong buying season could lead to a pickup in home-price growth later this year.”

That gives us another perspective on the change of policy from the US Federal Reserve. So far its U-Turn has mostly been locked at through the prism of equity prices partly due to the way that President Trump focuses on them. But another way of looking at it is in response to slower house price growth which was being influenced by higher mortgage rates as the Federal Reserve raised interest-rates and reduced its bond holdings. This saw the 30-year mortgage-rate rise from just under 4% to a bit over 4.9% in November, no doubt providing its own brake on proceedings.

If we look at monetary policy we see that perhaps something of a Powell Put Option is in place as at the end of last week the 30-year mortgage rate was 4.06%. Now bond yields have picked up this week so lets round it back up to say 4.15%. Even so that is quite a drop from the peak last year.

There is also some real wage growth according to the Bureau of Labor Statistics.

In terms of hourly earnings the situation has been improving since last summer whereas the weekly figures were made more complex by the drop in hours worked meaning we particularly await Friday’s update for them.

Moving to the economy then recent figures have been a little more upbeat than when we looked at the US back on the 22nd of February but not by much.

Of the main data so far this week we did not learn an enormous amount from the retail sales numbers from the Census Bureau.

Advance estimates of U.S. retail and food services sales for February 2019, adjusted for seasonal variation
and holiday and trading-day differences, but not for price changes, were $506.0 billion, a decrease of 0.2
percent (±0.5 percent)* from the previous month, but 2.2 percent (±0.7 percent) above February 2018.

As these are effectively turnover rather than real growth figures a monthly fall is especially troubling but January had been revised higher.

We are observing concurrent contradictory waves at the moment. The effect from 2018 was of a slowing economy combined with monetary tightening in terms of higher mortgage-rates. More recently after the policy shift we have seen mortgage-rates fall pretty sharply and since last summer a pick-up in wage growth. So we can expect some growth and maybe we might even see a phase where wage growth exceeds house price growth. But it would appear that the US Federal Reserve has shifted policy to keep asset (house and equity) prices as high as it can so it may move again,

As to the overall picture this from Corelogic troubles me.

According to the CoreLogic Market Condition Indicators (MCI), an analysis of housing values in the country’s 100 largest metropolitan areas based on housing stock, 35 percent of metropolitan areas have an overvalued housing market as of February 2019. The MCI analysis categorizes home prices in individual markets as undervalued, at value or overvalued, by comparing home prices to their long-run, sustainable levels, which are supported by local market fundamentals (such as disposable income).

Only 35% overvalued? Look again at the gap between house price rises and wage rises in the Yahoo chart above. So if we look backwards very few places must have been overvalued just before the crash. Also times are hard for younger people.

Frank Martell, president and CEO of CoreLogic. “Our research tells us that about 74 percent of millennials, the single largest cohort of homebuyers, now report having to cut back on other categories of spending to afford their housing costs.”

I am not sure that goes with the previous research. Also if the stereotype has any validity times for millennials in the US are grim or should that be toast?

The price for Hass avocados from Michoacán, Mexico’s main avocado producing region, increased 34 percent on Tuesday amid President Trump’s calls to shut down the U.S.-Mexico border ( The Hill).

Let me end with a reminder from CoreLogic that averages do not tell us the full story.

Annual change by state ranged from a 10.2 percent high in Idaho to a -1.7 percent low in North Dakota