The media and politicians like to talk about “the economy” as a general term. These days, there is a lot of talk about it having V- or U-shaped recovery.

But within the economy right now are several different economies, and they won’t see recovery at the same time or rate. So if we have to choose a letter for what the recovery will look like, maybe it should be a “K.”

That’s because some will go up while others go down. This is already happening and apparent, as Heather Long illustrates for The Washington Post:

“This dichotomy is evident in many facets of the economy, especially in employment. Jobs are fully back for the highest wage earners, but fewer than half the jobs lost this spring have returned for those making less than $20 an hour, according to a new labor data analysis by John Friedman, an economics professor at Brown University and co-director of Opportunity Insights.”

I have my own illustrations for you today. The first is a chart I call Economy Part 1. This graph goes back to 2000, and the red lines roughly show the trajectory of the recovery. 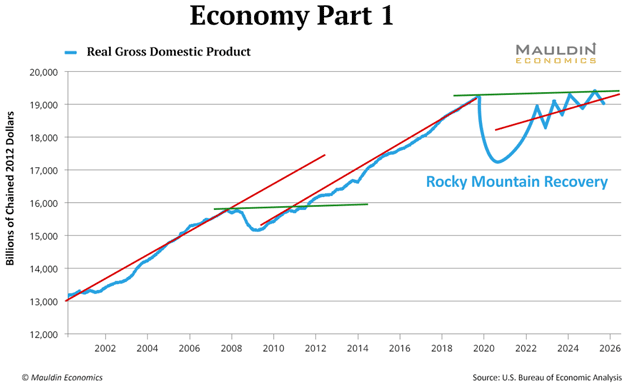 The St. Louis Federal Reserve database has not updated the second quarter, but I tried to represent it.

Notice that I have a recovery with a lower slope. That is in part because of the research by Dr. Lacy Hunt and others demonstrating that growth is slower in high-debt economies. Just a fact.

Note that we do recover; it just takes longer for this portion of the economy.

Then we come to Economy Part 2. Faster recovery and the slope of the recovery is higher. More like what I call the Stumble-Through Economy.

It still doesn’t look like the recoveries of the past, but that’s perfectly acceptable given the problems. 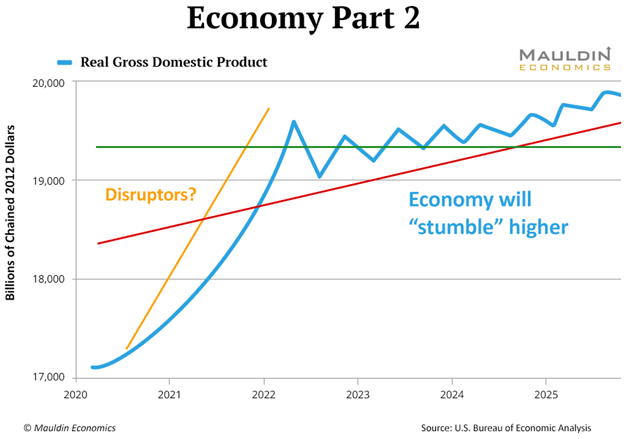 On this second chart, I want you to look at the yellow line I call the Disruptors. These are the companies that are changing the very foundations of our society and jobs.

I think by now most investors are well aware of the FAANG or FAAMG stocks, or whatever acronym we use. I am not including them in my thought experiment version of Disruptors. I mean, they are, but they have been around for a while.

Rather, I’m talking about the new companies that will not replace them but will join them in the pantheon.

You want to find out who the disruptors will be and how you can participate, rather than hunkering down. Because they will be the ones to lead the way… and keep charging ahead when other sectors finally start to follow suit.