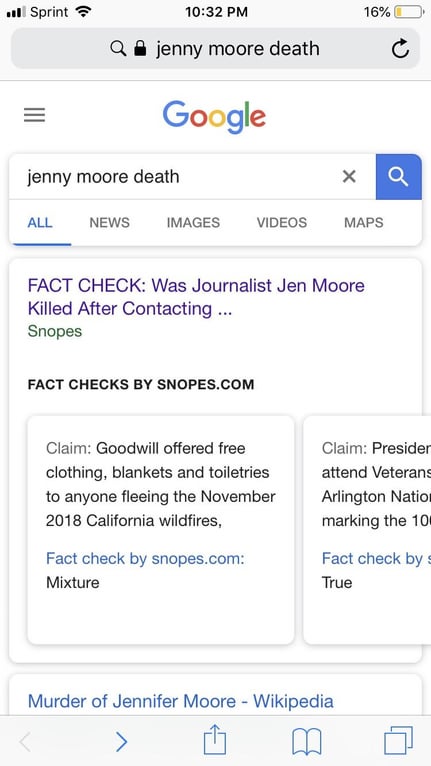 Whenever I google anything controversial and Snopes is the first thing I see, I feel like that gives credibility to the conspiracy they are trying to disprove.

Jenny Moore, aka Task Force on YouTube, was a journalist who worked with George Webb (highly recommend subscribing to his channel). She allegedly reported to DHS details about sex trafficking connected to the Clintons and died days later mysteriously.

I just don’t understand why Snopes needs to worry about a YouTuber who only had a couple thousand subscribers. Seems like if it was a non issue they would just ignore it, not make Snopes the first result you see when you search her name on Google, but that’s just me.

George Webb is one of only two people in the country right now who have filed a lawsuit against the DNC for its role in rigging the 2016 election in favor of Hillary and ousting Bernie. They conned Bernie donors out of $220 million. He has predicted/tied together some pretty incredible characters and storylines, and in my opinion it’s must see TV. I just hope he doesn’t suffer the same fate as his friend ‘Task Force.’