There was strong appetite. Only the Fed shed them. Here’s who bought.

Over the 12 months through February 2019, the US gross national debt ballooned by $1.26 trillion to $22.1 trillion. Someone had to buy this new pile of debt – but who? That question is getting increasingly crucial as this debt is ballooning even in good economic times, fueled by deficits that Fed chairman Jerome Powell calls “unsustainable” whenever he gets asked about them. Today, the Treasury Department’s TIC data shed some light on that question. 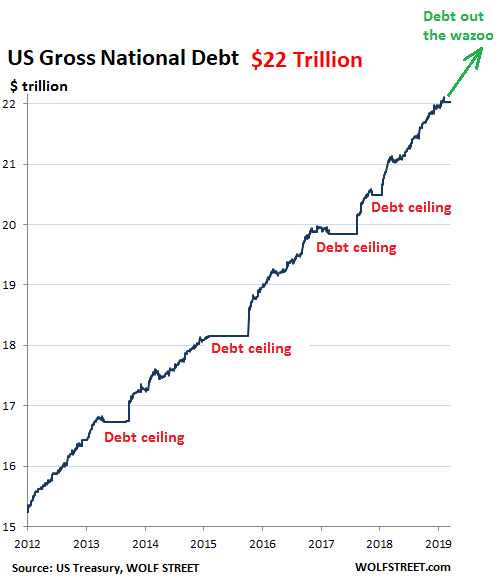 This US government debt that cost a record $523 billion in interest in fiscal 2018 is an asset for investors – the creditors of the US. The US relies on them to fund its huge deficits.

China, the largest foreign creditor of the US, dumped $46 billion of its holdings of marketable Treasury securities over the 12-month period, according to the Treasury Department’s TIC data. But over the last three months, China added to its holdings. Those holdings at the end of February stood at $1.13 trillion (the peak was in February 2016 at $1.25 trillion).

Japan, the second largest foreign creditor of the US, added $13 billion in Treasury securities to its holdings over the 12 months. In January alone, it added $28 billion. Japan’s holdings of Treasuries now stand at $1.07 trillion (having peaked at the end of 2014 at $1.24 trillion ).

China and Japan are by far the largest foreign creditors to the US, but their relative importance has edged down over the past few years, as their holdings have declined while the US gross national debt has ballooned. Their combined holdings of US Treasuries amount to a share of 10.0% of the US gross national debt, with China holding 5.1% (red line) and Japan holding 4.8% (blue line):

See also  Hey Chicago, When government has been insisting everyone get the shot, that's not what they meant. 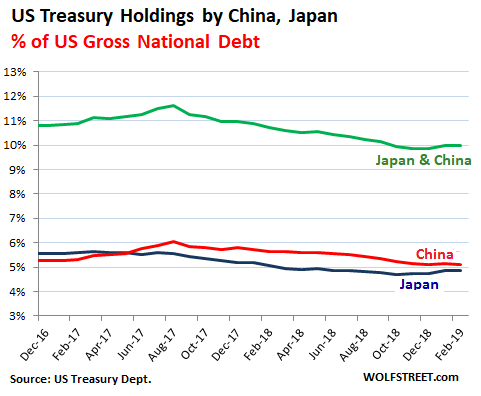 All foreign investors combined raised their holdings of Treasury securities over the 12-month period through February by $164 billion, to $6.39 trillion.

The other foreign creditors cannot hold a candle to China and Japan, with top four runners-up combined not being able to match China’s holdings. Most of the runners-up are tax havens for foreign corporate and/or individual entities. Belgium is where Euroclear operates; it holds about $32 trillion in assets in fiduciary accounts (the Treasury holdings in February 2018 are shown in parenthesis):

Other than Foreign Investors, who bought or dumped Treasuries?

Over the 12 months through February, all foreign investors increased their holdings by $164 billion, as we have seen above. But the government increased its gross national debt by $1.26 trillion over the same period. This leaves $1.096 trillion that someone else must have bought. Who?

Not the Fed. It shed $249 billion in the 12 months as part of its QE unwind, bringing its holdings down to $2.175 trillion as of the end of February.

US government entities added $160 billion in Treasuries over the 12 months, bringing their total to $5.86 trillion. This “debt held internally” is held by government pension funds, the Social Security Trust Fund, etc. They have invested their beneficiaries’ money in US Treasury securities. This “debt held internally” is owed the beneficiaries of those funds.

So over the 12 months, foreign investors added $164 billion, the Fed shed $249 billion, and US government entities added $160 billion, for a net increase of Treasury holdings by all three of $45 billion. But the total gross national debt increased by $1.26 trillion. And someone must have bought $1.19 trillion. Who?

American institutions and individuals added $1.19 trillion of US Treasuries to their holdings, now at $7.7 trillion. US banks are large holders, with $500 billion in Treasury holdings at the end of Q4, according to the FDIC. Other large US institutional holders include pension funds, mutual funds, hedge funds, corporations, and others. Individuals directly or indirectly also hold a portion of these $7.7 trillion in Treasury securities. In total, these American institutions and individuals held 34.8% of the US gross national debt: 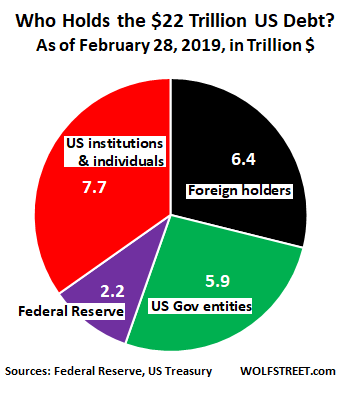 Foreign investors sharply increased their holdings of US Treasury securities over December, January, and February, adding $185 billion, while over the prior nine months, they had cut their holdings. These three months were the period when long-term yields sagged from the peak in November. And yields sagged because of strong demand for these securities, and part of this demand over those three months came from foreign investors. But the outstanding feature of the current landscape for US Treasury securities is that American institutions and individuals are buying them at a ravenous clip.