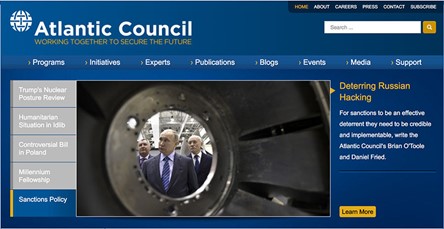 Guide to the Top Anti-Russia Think Tanks and Who Funds Them
Those of us who don’t want to have our lives, homes and families destroyed in nuclear war will want to know who so much wants conflict with Russia.
Who promotes the Russia-is-evil story?

Countering Russia has become a lucrative industry in Washington. In recent years, the think tank business has exploded. … From the start, let’s be clear, the term “think tank” essentially amounts to a more polite way of saying “lobby group.” …
However, particularly in the United States, the field has become increasingly shady and disingenuous, with lobbyists being given faux academic titles like “Senior Non-Resident Fellow” and “Junior Adjunct Fellow” and the like.

What is it? Essentially the academic wing of NATO. The Atlantic Council serves to link people useful to the organization’s agenda across Europe and North America. However, in recent years, its recruitment has increasingly focused on employees who directly attack Russia, especially on social media. …
What does it do? Promotes the idea of Russia being an existential threat to Europe and the US, in order to justify NATO’s reason for being.

This lobby group could as easily be titled “The Institute for the Promotion of War.” Unlike the others, it doesn’t consider Russia its primary target, instead preferring to push for more conflict in the Middle East. However, Moscow’s increased influence in that region has brought the Kremlin into its crosshairs.

Following the election of US President Donald Trump (ironically a German-American), the lobby group launched the Alliance for Securing Democracy (ASD) project. Its centerpiece is the ‘Hamilton 68 Dashboard’, which seems to classify social media users which reject the US liberal elite’s consensus as “Russian trolls.”

3 thoughts on “Who Funds The Anti-Russia Movement?”