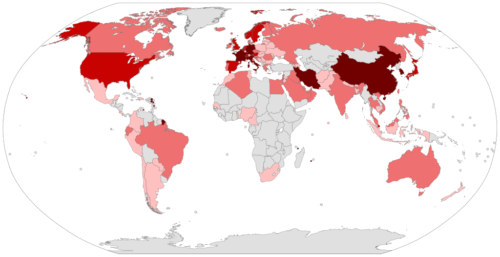 The World Health Organization now says the death rate of the new coronavirus is significantly higher than influenza, though much lower than earlier epidemics that had far less socio-economic impact, such as SARS, MERS, and Ebola.

Even on the infected Diamond Princess cruise ship, where the skew was towards more elderly patients, only 6 died out of the 707 reported cases (0.8%), indicating that access to adequate healthcare plays a huge role in saving lives and keeping fatality rates at a minimum.

SARS, MERS and Ebola have death rates of 9.6%, 34% and 90% respectively, but they are less contagious. The Spanish Flu — the influenza pandemic that killed tens of millions in 1918 — was about equally contagious and had a slightly lower estimated death rate of 3%; but it also happened in a time when there were no antiviral medicines, no hope of a vaccine, and almost no antibiotics.

WHO now says this coronavirus infection rate (as opposed to death rate) was thought to be the same as the flu when the virus was only known in China but has since been found to be two to three times that infectious. WHO, however, also rejects what it claims are unsubstantiated concerns that the number of infected in China is much greater than the number China reported:

Bruce Aylward, who led an international mission to China to learn about the virus and China’s response, said the specialists did not see evidence that a large number of mild cases of the novel disease called Covid-19 are evading detection.

I don’t suppose that matters, as people who want to believe the worst will accept WHO’s upgrade of how infectious and fatal the new disease is but reject its assessment of how accurate Chinese reporting has been. To address that, I’ll note that WHO stated China was not missing any significant number of cases in order to establish a basis for now stating the disease has a higher death rate than WHO originally thought.

Initially, WHO thought many cases were not being detected because they were mild and that detection of additional mild cases would result in a lower death rate over time because people with mild cases don’t die. So, WHO does not appear to be trying to tamp down fears when they are saying China’s count of total cases is right since it is, on the other hand, their basis for publicly increasing the death rate. People are not exactly going to become calmer because they now realize the death rate is two to three times higher than WHO originally reported.

It depends on WHO you listen to

While WHO is raising the death rate and their official infection rate, not all experts agree with WHO’s assessment that there are not many undetected milder cases in China. Time will tell, I guess..

I should correct one of my own errors here. I originally reported that influenza has a death rate of about 1% because several sources stated that in my research. However, I more recently came across other sources saying it was 0.1%. Since I was somewhat suspicious of a rate as high as 1% when I first reported that, I ran the math myself, and what I see in statistical reports of total illnesses and total deaths each year matches with those sites that say 0.1% (See my now corrected article: “The True Danger of Coronavirus (COVID-19): What are the real risks of infection, death and a global pandemic?“)

There are other experts who lay out far worse scenarios than WHO’s scenario:

A Harvard University epidemiologist says that as much as 70 percent of the world’s population could get the coronavirus…. and that it’s “almost inevitable” that the virus will impact the “entire globe….”

“It is the best estimate that I’ve been able to make based on a combination of the mathematical models that we use to track and predict epidemics…. it’s very much like a bad pandemic of influenza, which we experienced arguably twice or three times in the 20th century.”

Another university study predicts that even the best-case scenario is 15 million dead and a $2.4 trillion hit to global GDP.

New modeling from The Australian National University looks at seven scenarios of how the outbreak might affect the world’s wealth, ranging from low severity to high severity. In the low-severity model — or best-case scenario of the seven — ANU researchers estimate a global GDP loss of $2.4 trillion, with an estimated death toll of 15 million.

That’s spread over several years, but their high-level estimate is severe even this year:

In a high-severity scenario, the estimated loss to GDP in Australia in 2020 is $US103 billion, with many deaths.

Under the same scenario, the global economic outlook is dire:

In the United States, the figure is $US1.7 trillion.

Japan’s estimated loss to GDP is $US549 billion.

“Our scenarios show that even a contained outbreak could significantly impact the global economy in the short run,” Professor McKibbin said.… Even in the best-case scenario of a low-severity impact, the economic fallout is going to be enormous and countries need to work together to limit the potential damage as much as possible.

While my original figures about death rates and contagion rates were shy based on the sources I chose, I’ve stated consistently all along that the economic impacts are going to be huge due to human responses.

Coronavirus kills the oldest and has no respect for authority

Many of the most powerful people in the world are old, and coronavirus does not discriminate based on social status. Deaths are now hitting at high levels (not of death but of status), which can change the political conflicts of our world:

Nothing says “we’ve got this under control” like confirming that a handful of your government’s most-senior officials have caught the virus at the root of a deadly pandemic sweeping the globe….

Iran cancelled Friday prayers in Tehran on Friday as the virus spread further in the capital city. With Iran’s economy badly damaged by sanctions which have also contributed to shortages of essential supplies including medicine and medical products, it is uniquely vulnerable to the virus’s devastation.

You see, the disease is even changing religious practices.

In some cases precautions related to the outbreak are preventing staff from observing traditional Islamic guidelines for burial.

Even the US Centers for Disease Control says, “stay away” from Iran because it’s BAD over there. (As if anyone in the US needs to be warned to stay away from Iran). You really know it’s bad, however, when the government cannot even protect its own people at the top. Three senior officials, the Deputy Health Minister and a cleric have contracted the disease. The cleric died.

CDC recommends that travelers avoid all nonessential travel to Iran. There is limited access to adequate medical care in affected areas. Widespread, sustained community spread of a respiratory illness caused by a new coronavirus (COVID-19) has been reported in Iran

Images remind one of the Black Death:

Dozens of bodies sheathed in black bags line the floor of an Iranian morgue, while workers in protective suits and masks busily walk among them.

I’ll revise my original thoughts on the disease as real numbers merit. It is more important to me to BE right than to claim I was. As it looks now, the disease is rapidly becoming a pandemic and is more infectious and deadly than I originally reported. That said, fear of the disease is already causing far greater economic disruption and economic contagion than deaths are causing.

In Washington State, the death rate has been 17% (17 dead so far out of 104 known infected), but the disease began in a nursing home, and most of those tested and diagnosed have been connected with the nursing home:

In South Korea, however, the death rate has been reported as only 0.6%, which would be not much worse than the flu if true:

Listen to this egghead who “doesn’t want to make predictions” predict that more than half the world will be infected and that this is the most dangerous disease he has seen in his career: “It’s not a crazy analogy to compare this to World War II.”

Nice job of tamping down the panic! With government experts like this, why wouldn’t you wonder if the government is trying to create a panic? OR he’s just the rare government official speaking the truth. Hard to know.