The recent riots at Berkley campus protesting Milo Yiannopoulos’s  US campus tour were part of a well funded movement that has long sought to disrupt US politics and not in fact a “spontaneous response to hate”.
Along with the usual parade of pink hats, masked agitators and even some genuine protestors, there were several groups with signs that seem to be turning up at almost every protest since President Trump’s inauguration. The group Refuse Fascism were protesting with their highly visual signs, but what is their real intent, and where does this group come from?
Refuse Fascism states on their website that their mission is to spread the statement “No! In the Name of Humanity—We REFUSE to Accept a Fascist America!” but their roots are deeply un-American and in fact have ties to mass murder, attempted genocide of native peoples and property seizures of Jewish communities.
As with any organization, it’s worth following the money trail. Should anyone want to make a donation to this group, checks are made payable to a group called Alliance for Global Justice. The AFGJ are a group that has direct ties (and is in fact still a support group for) to the Nicaraguan Sandinista movement. In their own words:
“The Alliance for Global Justice was incorporated in 1998. Its role in the US grassroots progressive movement actually dates to nearly two decades earlier in February 1979 when solidarity activists from across the country formed the Nicaragua Network. Nicaragua Network was the leading Nicaragua solidarity organization in the 1980s after the triumph of the Sandinista Revolution”

If you are not familiar with the Sandinistas, they kidnapped, ransomed and murdered their way to power in Nicaragua during the 1970s and ended up as the government until 1990 (and are still today the second largest party). During their time in power, they were (and are) an admitted Marxist organization.
The Sandinistas systematically violated the human rights of Nicaraguan Jews, displaced and exiled more than a fifth of the population (the people that opposed their regime), murdered opponents literally by the thousands and “There are restrictions on free movement; torture; denial of due process; lack of freedom of thought, conscience and religion denial of the right of association and of free labor unions.”
So a group that supports restriction of free movement (of its own citizens) is out protesting President Trump’s temporary travel restrictions.
And a group that suppresses freedom of thought (and speech) in one country is actively protesting against not only Milo Yiannopoulos’s right to speak, but also his fan’s right to assemble under the threat of violence.
They sent out a call to arms prior to the event: 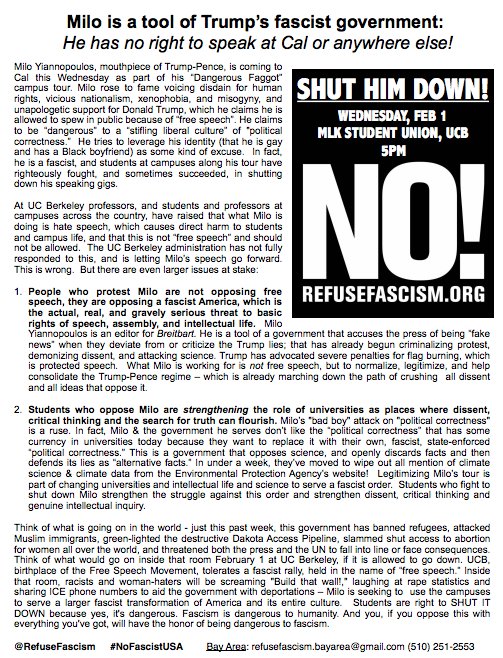 pbs.twimg.com/media/C3m-49nXUAguyqw.jpg:large
So a group that claims to be fighting fascism in America is directly under the banner of a group that is fascist/Marxist and directly supports the brutalization and displacement of the Miskito Indian tribes even to this day!
Yet these groups are lauded by the main stream media as defenders of human rights. Either they are too ignorant to research the groups they cheer on, or they just don’t care as long as the Marxist agenda moves forward. It’s time to question the complicit media about whether they support these actions and groups.

1 thought on “Why are Nicaraguan Sandinistas Rioting in Berkley?”