The number of traders who beat the indices soundly over both Bull and Bear markets are very few in number.

Bear markets are tough, not just for Bulls but for Bears, too. Bear markets are treacherous because they are famously punctuated with rip-your-face-off rallies (RYFOR) that shred Bears’ lavish profits and handsomely reward buy-the-dip Bulls.

Then the markets suddenly roll over to new lows and the anguished cries of margin-call-impaled Bulls rises eerily from the depths. Newly enriched Bears–the few who weren’t thrown off the Bear Bus by the repeated RYFORs–rejoice, only to be ejected from the Happy Seat by the next rip-your-face-off counter-rally.

Those playing both sides are wrung out by the churn, and while a few make fortunes, the majority are whipsawed off the Bear Bus and the Bull Bus by the volatility and the soul-crushing anxiety of being wrong yet again.

Bear markets excel at sucking in Bulls at the peaks and Bears at the lows. When the move you’ve been praying for finally manifests, the temptation to go all in and reap the gains for being right is irresistible.

Right when greed triumphs, the market reverses and fear rushes in to crush the euphoria. Bears may know they’re right over the long term, but it’s dishearteningly difficult to stay the course as profits vanish in rallies and the really big crash that mints fortunes remains maddenly elusive.

Bulls see every support level and bit of good news as the much-anticipated turning point where the bad news and the decline finally end. But the turning point is just as elusive as the penultimate capitulation crash. Everyone wants a clear signal that the Bear market is over and the moment to buy, buy, buy is finally at hand.

But Bear markets aren’t quite so generous. The Bear is generous with false signals, false bottoms and false rallies, and remarkably stingy with the-real-deal, this-is-it capitulations.

All the confidence gained in long market melt-ups where buy-the-dip paid off 100% of the time is slowly eroded by Bear markets. Buy the dip works for a few hours or a few days, but only the nimble reap the gains. Those playing with leverage find the gains from 10 successful trades are erased by one trade that got away.

The Bear loves to toy with hope–hope for a turning point, for vindication, for capitulation and for life-changing profits. The Bear market loves teasing not just the vulnerable roller-coaster-riding emotional traders but also the pros and even the algo-trading machines.

The teeming hordes who beat the indices in the Bull market are reduced to a handful of stragglers in the waning days of a Bear Market. Napoleon’s decimated, starving remnants of a once-great army hobbling out of Russia come to mind.

Looking back with the luxury of hindsight, Bear markets look like Paradise for the active trader: look how much moola could have been reaped by buying low and selliing high, again and again and again.

Easier said than done, as my chart of the Anatomy of a Bear Market illustrates. What’s easy is being whipsawed and thrown off the bus.

That grizzled old wreck of a trader who mumbles incoherently about the 70s, 1987, 2002 and 2008? Listen to the ramblings, and ponder the runes and wanderings of the shattered mind. Therein lie the secrets to emerging not as a shell-shocked survivor but as the rare victor. 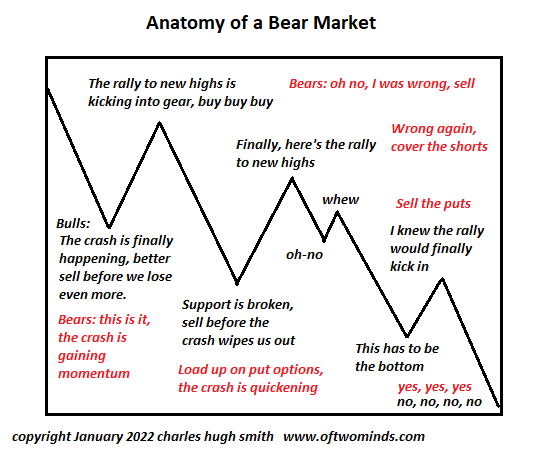