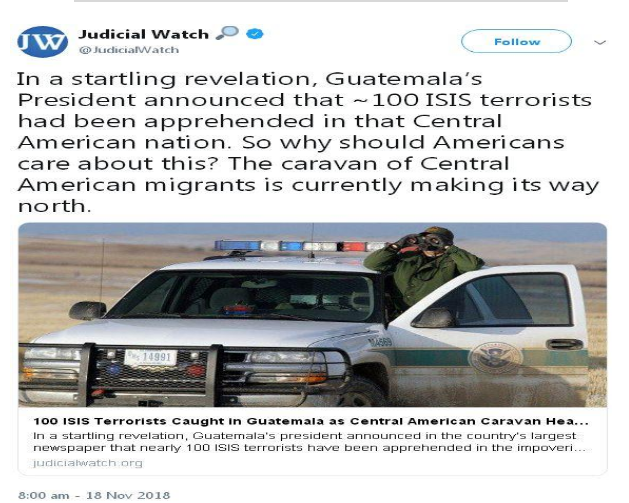 The caravan is here. The invasion has begun. Unfortunately, the judicial branch continues to hamper President Trump’s duty to defend the citizens of the United States.

A federal judge stopped the Trump administration from refusing asylum to immigrants crossing our southern border illegally on Tuesday. President Trump issued an order earlier this month saying that anyone who crosses the border would be ineligible for asylum. The president stated that the asylum ban was needed to stop the invasion of a massive wave of illegal immigrants in multiple caravans claiming refugee status.

U.S. District Judge Jon Tigar agreed with legal groups like the ACLU, which filed suit, arguing that the nation’s immigration law allows anyone to seek asylum if they enter the country at official ports of entry.

A former nominee of Barack Hussein Obama, Tigar said, “Whatever the scope of the President’s authority, he may not rewrite the immigration laws to impose a condition that Congress has expressly forbidden.” Trump used the same presidential power when he imposed a travel ban on a handful of Muslim-majority countries rife with terrorists, which was first barred by a federal judge but ultimately upheld by the Supreme Court.

This is all happening while 3,000 migrants in the first waves of the caravan started arriving in TIjuana over the weekend and earlier last week. Northbound traffic was closed for a few hours at the San Ysidro crossing in San Diego on Monday and barbed wire barriers have been placed to corral the rush of people approaching the border.

The Trump administration is resisting this latest overreach by this federal judge in, of course, San Francisco, California.

“It is absurd that a set of advocacy groups can be found to have standing to sue to stop the entire federal government from acting so that illegal aliens can receive a government benefit to which they are not entitled,” DOJ and DHS said in a joint statement yesterday, hours after the judge’s order that will be in effect for at least a month unless an appeal overturns his decision.

President Trump sent almost almost 6,000 active duty troops to the southern border in preparation for the incoming caravan. One would think the president is in charge of the military and defense of the nation, but you would be mistaken. The military has gone around the president as all of the 5,800 troops will reportedly be home by mid-December, according to a top Army commander. The Pentagon could begin reducing the number of troops at the border as soon as next week, despite the fact that thousands of migrants are now at the border and thousands more are due to arrive any day now. The Army also rejected a DHS request for armed troops to backup Border Patrol.

Judicial Watch was on the ground covering the Central American caravan near the Guatemalan-Honduran border + observed that the popular mainstream media narrative of desperate migrants — many of them women or kids seeking a better life — is hardly accurate.t.co/5nWqJz5mXB

In its limited time at the border, the Army has already gotten a good amount of work done. On Monday, some 100 troops based at Fort Knox, Kentucky started laying miles of barbed wire fence at the Texas border town of Laredo. Despite the attention at the California border where the caravan appears to be arriving in droves, it is imperative to remember, as I pointed out in my article last week, that the main entry point for illegal immigrants is the Rio Grande – Texas section of the border. Barbed wire and other barriers have been constructed in other parts of California as well with the current administration at least attempting to take illegal immigration seriously.

A question I can no longer ignore is why our government is so effective at erecting military bases, roads, and infrastructure in other faraway places, but has proven incapable of building a simple wall along its southern border? The federal government has, at an outrageous cost to its taxpayers, spent massive amounts of money overseas.

The US Embassy in Baghdad, for example, is a 104-acre property in a foreign country that is comparable in size to the Vatican, an independent city-state in Rome. The embassy opened in 2009 and cost some $750 million to build in the Green Zone of Iraq’s capital city as Congress opened up the checkbook and asked no questions about why that much money was needed to house some diplomats and military personnel.

What is more head scratching is the fact that we have managed to build more than 900 military bases around the world. But the Trump administration and Congress can’t seem to find the funds to build a border wall to protect its citizens from the 1,100 people who cross the border illegally every day on average. Who knows who these people could be?

Republican Rep. Jim Jordan recently said that the Trump administration has a two month window to finalize a deal to secure funding for the wall during the lame duck Republican Congress. Democrats will do everything they can to stop that from happening. However, you have to remember that Republicans have had both houses of Congress for two years now and have accomplished nothing on immigration.

“We should be focused on that one main thing over the next several weeks as we still have a few weeks left while Republicans control all of government,” Jordan said during the interview.

The caravan of migrants is far from a majority of families with women and children. Do not believe the mainstream media misinformation campaign. These are mostly young men and most importantly, many are also criminals.

More than 500 criminals are traveling with the caravan at the San Diego border, according to DHS, which went on to say that “most of the caravan members are not women and children,” the group is made up primarily of single adult teen males. The women and children have been pushed to the front of the line to garner sympathetic media coverage. It’s also worth pointing out that 100 ISIS terrorists were apprehended in Guatemala about a month ago.

READ  IT’S OFFICIAL: The President is not well!

DHS officials say there are around 6,000 people in Tijuana waiting to be processed at the San Ysidro crossing, as of Monday evening, with more on the way. It looks like they are coordinating with the Mexican government to keep asylum seekers in Mexico while their cases are reviewed as we do not have the facilities to house all of those people at once.

Our country is at a crossroads. With the election of Donald Trump two years ago, I thought we were finally on the right rack. I thought we were finally turning the corner and would finally do something meaningful on immigration. I thought we were finally going to put the concerns of American citizens before those of illegal immigrants. But with the midterm election results earlier this month, highlighted by a massive GOP loss in crucial suburban swing districts, I fear we have already gotten off of the path toward sustainable prosperity. However, a Monmouth Poll released Monday gave me some hope. The poll said 53 percent of Americans view the incoming caravan as a threat.

These people in the caravan claiming asylum do not want to assimilate. They want to come into our country, take our jobs, live off of our generous benefits and healthcare, and live their lives with their existing language and culture. If we allow this to happen, we won’t have a country much longer.

But none of that matters to California’s Governor Jerry Brown or fellow California’s US Senators Dianne Feinstein and Kamala Harris, who welcome illegals with open arms in their sanctuary state democratic socialist liberal utopia. What has that gotten us? There are 90,000 homeless people living in tent cities in Los Angeles. 11,000 living on the streets of San Francisco. Fecal matter on the sidewalks and used needles in parks and playgrounds. Sacramento has seen a notable spike in the number of homeless people. And San Diego suffered from a Hepatitis A outbreak late last year.

Immigration should be reduced, not expanded. We need to close our borders to defend our nation from drug gangs, terrorists, and other criminals, not open them up to anyone looking for a better life. We need to combat homelessness and employ all able-bodied Americans before welcoming a poverty-stricken class of low-wage workers to benefit the deep-pocketed corporations of America. We need to let people into this country who are willing to assimilate and speak our language and live our culture.

In short, we need to build the wall.