Over the last few days, there has been a crazy surge in same day reverse repo operations at the NY Fed.

What are these Reverse Repos you ask, and I ask too BTW, but according to the NY Fed:

” The New York Fed conducts repo and reverse repo operations each day as a means to help keep the federal funds rate in the target range set by the Federal Open Market Committee (FOMC). “

So large banks and institutions can exchange with the Fed money to help control the money supply. Gotcha.

Ok, and to see how much has been traded recently: 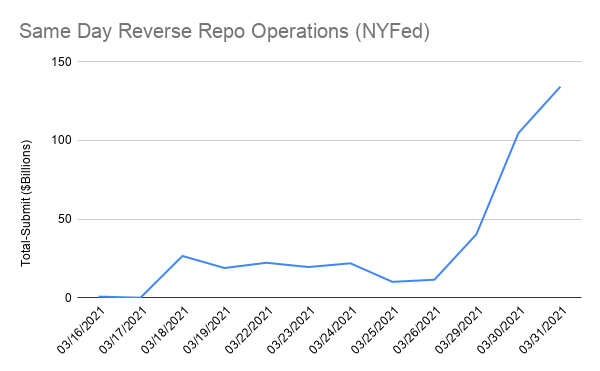 Honestly, I came across something online citing and wanted to see what others thought. Steven Van Metre, Bond King from his videos, comments as it being too much cash in circulation, though also in the same video cites a tweet about the IMO saying there is a global shortage of the US dollar?

And I understand that with the SLR exemption expiring, banks need to lower their capital, however I don’t think (I don’t think alot actually regardless) that lending the Fed billions overnight would actually help banks comply.

Or is this in anyway linked to the shit going down with over leverage?

Edit: ELI5 Thread With Excellent Comments Explaining Why This Can Happen At End of Quarter To Help Banks Pay Taxes

– Some comments also seem to imply that when Banks get worried about the market they do this to shift into more secure investments.

– Finding some stuff on the Overnight Repo Issues of Sept 2019 when the rate spiked up to 10%, but overnight repo rates currently have been flat (0.05 as of last Friday)

– Repo Market depends pretty much on 4 banks (BoA, Citi, JPMorgan,WF) and liquidity issues back in Sept 2019 caused a fuss because of the Liquidity Rule and banks not having enough cash to follow the rule and to lend out, so the repo rate shot up back then.

– Other theory I’ve read, Banks are fighting with FED, as always, and want the Liquidity Rule raised and the FED wants to sell bonds to pay for stimmies and Biden’s infrastructure. Banks use the borrowed T-Notes to keep bond interest down so no one wants to buy government bonds. Not sure if this summation is correct, but it would be similar to Banks shorting the bond market.

— Yep, this is looking more and more like the case, but even weirder with Banks loaning HF’s money and negative interest rates to get more treasurey notes, still reading more on this one….

–> If Bond interest rates keep going up, then prices for them will go down. If Banks buy up treasuries and then sell them on the treasury market, they can buy them back at a later date after interest rates have risen, AT A LOWER PRICE, banks keep the difference, BUT if there’s a shortage of TNotes, OR if interest rates start falling again, Banks have to buy them back at higher prices, which…. ——> This is gonna need a whole new post, this is getting DEEP.

—> Yea, this is atobitt’s stuff definitely, READ THEIR POST about the shorting of the bond market and the short squeeze for TNotes