It’s off to the races for the world’s largest asset manager, BlackRock Inc. (NYSE:BLK). At a time when the majority of Wall Street’s mega banks are just starting to buy into the green investing ethos, BlackRock has quickly established itself as the purveyor of ESG and renewables investing. BlackRock owns one of the largest global renewable power platforms, with $5.5 billion in equity assets under management (AUM).

In January, the firm pledged to grow its ESG and green portfolio from $90 billion to more than a trillion dollars in the space of a decade. BlackRock now appears desperate to be seen as the kingpin of the green drive, even recently bowing to the demands of Canadian oil and gas producer Ovintiv (NYSE:OVV) shareholders, a move it probably would have considered infra dig just a few years back.

And the Fed and the investing universe are loving it.

BLK shares have been on a tear, surging 21% over the past two weeks and 8.8% in the year-to-date after the company clinched a deal with the Fed to run a junk-bond purchase program as part of its multi-pronged stimulus effort, never mind the fact that BlackRock happens to be one of the biggest issuers of said ETFs. BlackRock has a similar equities-buying program with the Central Bank of Israel.

Even PNC Financial Services Group (NYSE:PNC) recent sale of its 22% stake in BlackRock worth $17 billion due to fears of a torrid U.S. economy was not enough to stop the BLK momentum with large institutional investors from as far off as the Middle East scooping up the shares.

In contrast, the Financial Select Sector SPDR Fund (NYSEARCA:XLF), an ETF that holds Wall Street bank stocks such as JPMorgan Chase (NYSE:JPM), Bank of America (NYSE:BAC),Wells Fargo (NYSE:WFC), Goldman Sachs (NYSE:GS) and Citigroup (NYSE:C), is down 22% in the year-to-date.

BLK is the only large Wall Street investment firm still in the green in the ongoing market rout while the six Wall Street banks are languishing in the red. 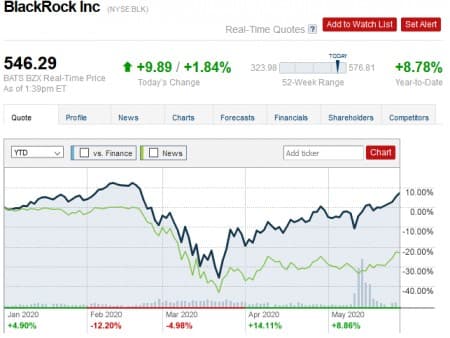 Wall Street mega-banks are lagging behind by a country mile. Last year, Goldman Sachs became the first big U.S. bank to rule out financing new oil exploration or drilling in the Arctic, as well as new thermal coal mines anywhere in the world.

But that’s far from adequate remediation in the eyes of shareholders.

Indeed, Wall Street banks have together conducted fossil fuel financing to the tune of more than half a trillion dollars since the ratification of the Paris climate accord in 2015. 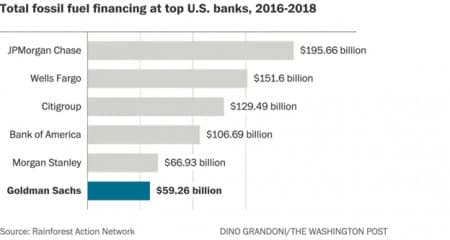 BlackRock has invested nearly $2 trillion in more than 800 product offerings across a wide range of investment strategies and asset classes. One of its key products is iShares exchange-traded funds, a class of ETFs that has lately become a big hit with the investing universe thanks to its flexibility and low costs.

In April, BlackRock announced that its iShares portfolio had recorded $13.8 billion in net inflows during the first quarter, a remarkable feat considering that the broader market benchmark S&P 500 lost 16% over the timeframe. iShares now boast $1.85 trillion in assets under management (AUM), representing nearly 30% of BlackRock’s $6.47 trillion in total assets.

Another big reason why BlackRock ETFs have become so popular is due to the firm’s laser-focus on the ESG investment megatrend.

A decade ago, green investing was largely associated with a warm moral glow but was hardly regarded as part of mainstream investing. However, that has changed dramatically over the past few years thanks to increasing climate awareness, investors demanding socially and environmentally conscious options, and a growing shift in policy even by banks themselves.

Indeed, ESG investing is no longer a nice-to-have but a must-have in the hedge fund industry.

As per ETFGI data, ESG ETFs now represent $52 billion of the $6 trillion AUM for the global ETF market. A 2020 Global ETF Investor Survey found that 74% of global investors plan to increase their ESG allocations over the next year.

BlackRock has become a trailblazer in the space, and has pledged to increase its ESG portfolio from $90 billion in 2019 to more than a trillion dollars by the end of the decade. After years of what critics considered prevarication and greenwashing, BlackRock now appears desperate to be seen as the kingpin of the ESG drive, even recently giving in to the demands of Ovintiv (NYSE:OVV) shareholders to get the Canadian oil and gas producer to disclose its plans to meet targets set by the Paris Agreement.

BLK investors are hardly complaining, though.

BlackRock has been tapped by the Fed to be the investment manager for investment-grade corporate bonds as well as junk bonds as part of its bailout strategy, in effect, meaning that BlackRock will be buying its own ETFs.

The Fed has come to the defense of the BlackRock deal, swiftly dismissing the screaming conflict-of-interest thus:

The Fed will use $75 billion of the $454 billion allocated for the CARES Act for its two corporate bond-buying programs.