Wolf Richter wolfstreet.com, www.amazon.com/author/wolfrichter
To delay falling into a fiscal and financial sinkhole.
“Let’s drop the pretense. The Toronto housing market and the many cities surrounding it are in a housing bubble,” Bank of Montreal (BMO) Chief Economist Doug Porter told clients in a note last week.
Many have called it “housing bubble” for a while, but now it’s official, according to BMO. In January, the benchmark price and the average price were both up 22% year-over-year, with the average price of detached homes up 26%, of semi-detached homes 28%, of townhouses 27%, and of condos 15%. Double-digit price increases have become the rule in recent years.
But this jump was “the fastest increase since the late 1980s – a period pretty much everyone can agree was a true bubble – and a cool 21 percentage points faster than inflation and/or wage growth,” Porter explained in his note, cited by BNN.
Home prices in Greater Toronto have become “dangerously detached” from economic fundamentals and are soaring simply on the belief that they will continue to soar, he wrote. “The market is far too hot for comfort.” BNN:

The often-cited mantra that Toronto’s real estate market is being driven largely by a lack of supply is wearing thin, he argues. Housing starts in Toronto and Vancouver recently hit an all-time high of 70,000 units per year and overall Canadian starts are above demographic demand at 200,000 units in the past year, according to BMO.

The “massive price gains” are not driven by lack of supply, but “first and foremost by sizzling hot demand, whether from ultra-low interest rates (negative in real terms), robust population growth, or non-resident investor demand.”
“Toronto and any city that is remotely within commuting distance are overheating, and perhaps dangerously so,” he said.
But don’t expect the city of Toronto to do anything other than inflate the bubble further. It has to – unless it wants to fall into a fiscal and financial sinkhole.
This became apparent last week, when the city councilors approved Toronto’s operating and capital budgets. What a mess!
The tax-supported operating budget is now expected to grow by 4.4% in 2017, to C$10.5 billion. So more taxes must be extracted from the hapless folks in Toronto. Among sundry fees, taxes, and levies, the councilors approved a 3.29% increase in the residential property tax and raised the municipal land transfer tax.

Under the new budget, property taxes would provide 38% of the revenues, and the land transfer tax 7%, for a total of 45% of the C$10.5 billion in taxes, or C$4.7 billion.
Just how dependent the funding for Toronto’s ballooning operating budget has become on the house price bubble – and the property-related taxes it generates – is made clear in this chart by Warren Lovely, Head of Public Sector Research & Strategy at National Bank Financial, Toronto: 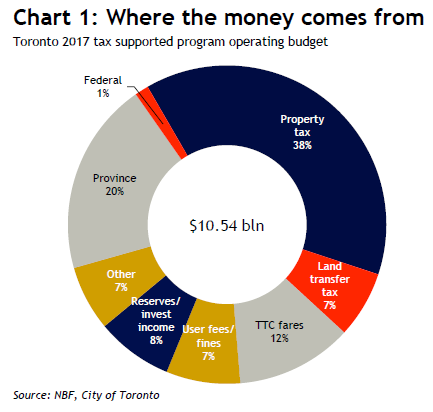 Of note, land transfer tax revenue has skyrocketed in recent years, moving from a budgeted $165 million in 2009 to an estimated $716 million in 2017—a greater than 4-fold increase over eight years – driven in part by rising property values and a move to harmonize the city’s tax rate with that of the province.
Despite successfully addressing ~$750 million of net budgetary pressures/new investments in 2017, there are still “significant future annual budget gaps” to be filled going forward, including an estimated $371 million hole in 2018.

The capital budget sees an additional investment over 10 years of C$5.8 billion, of which C$3.3 billion would have to be funded by debt. This would, according to the budget, require “relaxing the City’s debt ratio policy.”
Despite that ballooning capital budget, the city sees $30 billion in “unmet capital needs” over 15 years. And Lovely warns, ratings agencies will be “mindful of capital spending pressures”:

Clearly, from the city’s perspective, alternative revenue tools are needed to address large unfunded capital needs. As for bond supply, the budget outlines $840 million of new tax supported debt issuance in 2017, largely in line with 2016. Issuance is seen rising to $900-990 million/year in 2018 and 2019.

So imagine what might happen to Toronto’s tax revenues, budget, debt issuance, and credit ratings once property prices head south.
Toronto is just an a example. There are many jurisdictions in the US that face similar budget problems, and the only thing that keeps them from falling deeper into a financial and fiscal sinkhole is the rich tax revenue that the local property bubble extracts from the economy. Homeowners and investors might grumble, but they usually put up with it, mollified by soaring property prices. So this system works until suddenly, it doesn’t.
That moment occurs after the house price bubble begins to deflate. Politicians (and central bankers, too) will try to do whatever it takes to kick that inevitable moment further down the road, on the theory that, hopefully, by then, they will have moved on and out of harm’s way.
In Toronto, “home ownership continues to be a great investment,” the Toronto Real Estate Board explained, which is what others said about Vancouver a year ago. Read…  Desperation Invades Vancouver Housing Bubble, as Hot Money Still Pumps up Toronto, Hype Overflows