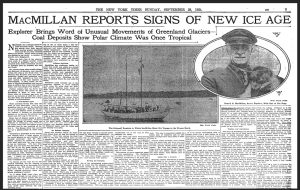 On September 28, 1924, the New York Times reported that there was evidence that the Arctic had actually been tropical in the past. They reported that there was the possibility of a coming Ice Age. The NY Times reported: “NATURE is in a strange mood beyond the Arctic Circle, Glaciers are moving from their age-old beds, pouring greater quantities of ice into the sea than recorded history has known. Broad areas of land are sinking to new levels. A number of islands have disappeared.”

There have always been overlapping forecasts that swing between global warming to Ice Ages. Journalists love to write alarming stories to capture the attention of readers. This has been going on since 1895. The difference this time has been that this issue has been seized by the socialists and used as the covert method to push their agenda to control the economy, end independent business, and redistribute wealth.