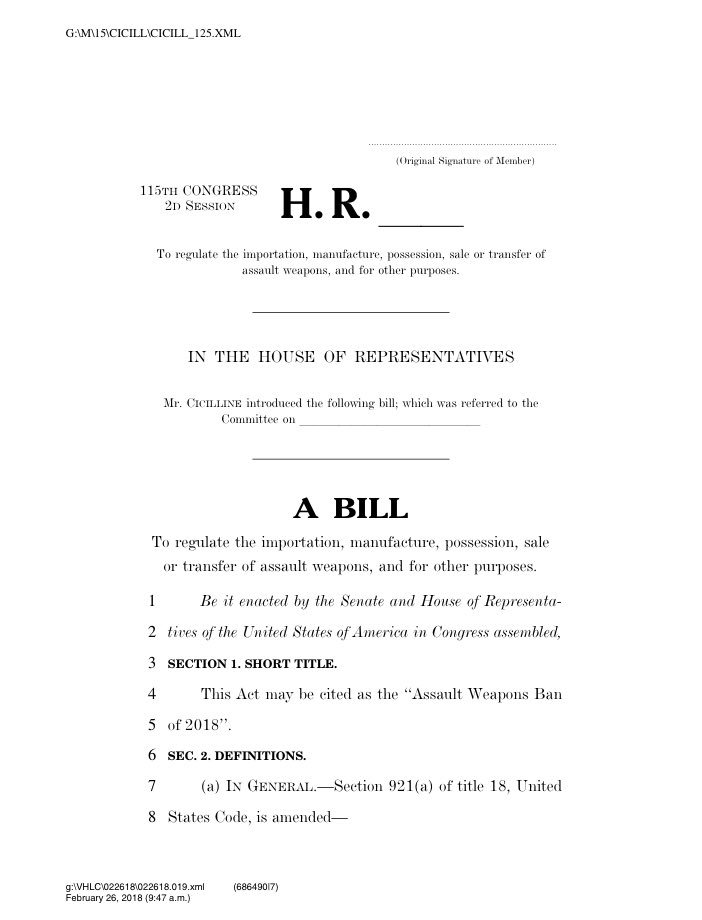 Are you making your list and checking it twice? These traitors need to be voted out of Congress at all costs.
House Democrats have introduced a bill banning semi-automatic firearms in the wake of the Feb. 14 shooting at a high school in Parkland, Fla.
Rep. David Cicilline, D-R.I., announced Monday he is introducing the Assault Weapons Ban of 2018. More than 150 Democrats have signed on in support of the legislation, Rep. Ted Deutch, D-Fla., said.
www.washingtonexaminer.com/house-democrats-introduce-bill-prohibiting-sale-of-semi-automatic-weapons/article/2650087
The Assault Weapons Ban of 2018 will prohibit the sale, transfer, production, and importation of:
Semi-automatic rifles and pistols with a military-style feature that can accept a detachable magazine;
Semi-automatic rifles with a fixed magazine that can hold more than 10 rounds;
Semi-automatic shotguns with a military-style feature;
Any ammunition feeding device that can hold more than 10 rounds;
And 205 specifically-named and listed firearms.

cicilline.house.gov/press-release/cicilline-introduces-assault-weapons-ban-2018
Here’s the only link I can find to the actual bill. It contains the list of 205 specifically named firearms.
It also sounds like any firearm purchased before this bill would be grandfathered in, but there would be rules for storage of those firearms (I was wrong about concealed carry.
Sounds like you either have to have it on your person or locked up).
This is the kind of shit they want to pass. They want to completely disarm us.
cicilline.house.gov/sites/cicilline.house.gov/files/images/Assault_Weapons_Ban_of_2018.pdf
Look at this paragraph at the end. They know this is unconstitional but they want to make it as difficult as possible to fight this kind of gun grab:
If any provision of this Act, an amendment made by this Act, or the application of such provision or amendment to any person or circumstance is held to be unconstitutional, the remainder of this Act, the amendments made by this Act, and the application of such provision or
amendment to any person or circumstance shall not be affected thereby
cicilline.house.gov/sites/cicilline.house.gov/files/images/Assault_Weapons_Ban_of_2018.pdf
SECURE STORAGE OR SAFETY DEVICE REQUIREMENT FOR GRANDFATHERED SEMIAUTOMATIC ASSAULT WEAPONS.— It shall be unlawful for any person, other than a licensed importer, licensed manufacturer, or
licensed dealer, to store or keep under the dominion or
control of that person any grandfathered semiautomatic assault weapon that the person knows, or has reasonable cause to believe, will be accessible to an individual prohib2
ited from receiving or possessing a firearm under sub3
section (g), (n), or (x), or any provision of State law, un4
less the grandfathered semiautomatic assault weapon is—‘‘(1) carried on the person, or within such closeproximity that the person can readily retrieve and use the grandfathered semiautomatic assault weapon as if the grandfathered semiautomatic assault weapon were carried on the person; or
‘‘(2) locked by a secure gun storage or safety
device that the prohibited individual has no ability to
access.’’.
cicilline.house.gov/sites/cicilline.house.gov/files/images/Assault_Weapons_Ban_of_2018.pdf
The Assault Weapons Ban of 1994 is credited with losing Democrats the House and with costing Al Gore the 2000 Presidential Election. Democrats have not grown any smarter since then. The Blue Wave just turned into a whirlpool circling the drain.
NOTHING galvanizes Conservatives and leads Liberal patriots to jump ship from the Democratic Party faster than coming after the 2nd Amendment.
They’re not tired of losing, apparently.
h/t Daniel Higdon