North American yield curves are narrowing further today, now with less than .5% between the 10- and 2-year Treasury yield in Canada, and less than .70% in the US. Both are now at the narrowest spread since the last market cycle peak in 2007.

Here is my partner Cory Venable’s update chart showing the US 2- and 10-year spread since 1998. When the spread hits zero, a recession has historically been underway. And no, your conventional portfolio of equity and corporate debt securities is no more “diversified,” i.e., “protected” against the downside today than it was in the last bear cycles.

Meanwhile, China’s yield curve is already inverted, and its central bank governor, Zhou Xiaochuan, released another warning on the weekend about the perilous state of extreme debt and financial leverage in China that is posing “hidden, complex, sudden, contagious and hazardous,” risks to the global financial system. Here is a direct video link.

stockboardasset.com/insights-and-research/yield-spreads-warning-life-savings-risk/
Volatility and the Alchemy of Risk: Reflexivity in the Shadows of Black Monday 1987 [PDF, Epic long post]
static1.squarespace.com/static/5581f17ee4b01f59c2b1513a/t/59e8a9b0e9bfdfb287faa3d2/1508420022032/Artemis_Volatility+and+the+Alchemy+of+Risk_2017.pdf
I learnt a lot from this, didn’t realize short vol was such a huge systemic phenomenon.

Le Bubble: it's bigger than you think… pic.twitter.com/wSR6V5aqDo static2.businessinsider.com/image/59ee4411909924c74c8b5e3e-1201/markets%20cotd%20october%2023.png
Would you look at that, stock market levels and wealth inequality levels similar to the conditions that created the Great Depression and substantial social and political upheaval…

Economic crash IMMINENT: Fears grow as markets hit high not seen since Black Tuesday
A BOOM in stock market valuations on either side of the Atlantic have sparked fears of an imminent financial crash.
There is a growing sense of foreboding amongst economists who believe the market is poised to repeat what happened during the dotcom bubble and the Wall street crash.
Stock values have reached levels not seen since those two disasters and a correction would throw the world economy – currently seeing an ongoing boom period – into disarray.
Graham Hacche at the National Institute for Economic and Social Research (NIESR) said:“In both cases, sharp market ­declines followed these high readings.”
He went onto say the cyclically adjusted price-earning ratio (the Shiller CAPE ratio) has risen above 30 which shows “markets may have become increasingly vulnerable to shocks.” 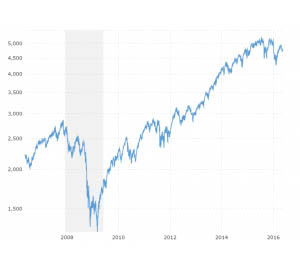 He told the Telegraph this could have “significant negative repercussion on private consumption and investment.”
Following the Bank of England’s decision to raise interest rates the London stock market closed at a record high of 7560.35 as well as US equities ending the week on a record high.
This has left markets in a vulnerable position to shock which could originate from anywhere in the world.
High interest rates can trigger a crash, whilst low rates could also create a bubble followed by a bust, added Mr Hacche.

www.express.co.uk/finance/city/876082/stock-market-black-Tuesday-dotcom-bubble-Wall-street-crash
More Signs Of An Inflationary Recession Are Building Up

First of all, the leading indicators are turning red now. The following chart definitively shows that the trend is pointing down.

The yield curve is at its lowest since the economic recession of 2008. At this pace, we still have a year or two before a new recession starts. It also shows there isn’t much room to increase interest rates.

On the fiscal side, I’m expecting larger deficits coming (see chartbelow from FRED). We will see annual deficits of over $1 trillion in the coming years.

First of all, the debt ceiling was extended in September 2017 and the U.S. debt subsequently rose $600 billion in just 2 months. Higher debt, means higher deficits. The new deadline when the government can’t pay its bills will occur somewhere in March 2018.

On the following chart you can see the cash balance of the U.S. treasury. A lot of cash was spent to prop up the stock market since Trump became president last year. It ran out of cash in March 2017. In April the cash balance went up due to tax revenue coming in. But also that cash has been spent. In September 2017, the treasury ran out of cash again and subsequently restated its debt ceiling to add another $200 billion in cash by issuing debt. We will see what will happen in March 2018 when they run out of cash again.

Second, in October 2017, Trump finally started repealing Obamacareby hitting on subsidies for insurers. It is forecasted that the federal deficit will go up by $194 billion over a decade.

Third, Trump’s recent tax plan would lead to a $1.5 trillion decrease in tax revenue for the next ten years. As social security and medicare have to be paid, we will see a massive increase in deficits here. Moreover, this is just mainly a corporate tax deduction, not a payroll tax cut. Small businesses will benefit while working Americans are left out of the game.

All of these increases in deficit will have a significant effect on bond yields, which will be going higher due to repricing of risk as the status of the U.S. dollar is waning. A higher bond yield always leads to a decrease in the value of the currency as the following correlation below shows. I think we are closer to the end than the beginning of a bull market in U.S. bonds and this means we could see the U.S. dollar drop with rising bond yields.

Inflationary times are coming when bond yields rise. Investors should protect themselves by going into assets that benefit from inflation: equities and precious metals.

stockboardasset.com/insights-and-research/signs-inflationary-recession-building/
Deutsche Bank Doubles Down on Leveraged Loans in Push for Growth
www.bloomberg.com/news/articles/2017-11-07/deutsche-bank-doubles-down-on-leveraged-loans-in-push-for-growth
A couple of years ago Deutsche Bank was fighting for survival, now its looking to take on more risk? This is the environment of a major top, no fear whatsoever.