OPEC turns 57 years old this year. The history of OPEC began in September 1960, when five founding members signed their names to a document establishing the Organization of the Petroleum Exporting Countries (OPEC), and declared the organization open to “any country with a substantial net export of crude petroleum, which has fundamentally similar interests to those of Member Countries.” In short order, eight more countries took them up on that offer. As a result, OPEC today consists of 13 active members.

Some of the world’s biggest oil producers do not belong to OPEC, and never have. Among them: Canada, China, Mexico, Norway, Russia, and the United States itself. And although not a single European nation is an OPEC member, the organization maintains its headquarters in Vienna, Austria.

“OPEC’s founding objective was to free its members from the influence of developed nations — of which Russia, in the form of the Soviet Union at the time — was one. OPEC invited  “any country with a substantial net export of crude petroleum, which has fundamentally similar interests to those of Member Countries” to join OPEC. But even if Russia exported “substantial” quantities of crude (and it did), Russia’s interests were not “fundamentally similar” to those of OPEC’s founding members. This all explains why Russia did not join OPEC at its formation in 1960.” Fool.com. Same was the case with other major oil producing nations not forming part of OPEC.
High oil prices tend to discourage oil consumption and depress oil sales — the lifeblood of OPEC countries — and encourage customers to invest in alternative fuel sources. What OPEC really should aim for, member countries soon concluded, was stability in oil markets that would guarantee a “regular supply of petroleum to consumers” and “a steady income to producers.” Thus, it’s probably fair to judge the history of OPEC by the yardstick of how well OPEC has succeeded in maintaining stable, high prices for oil. How has that worked out? Let’s take a look: 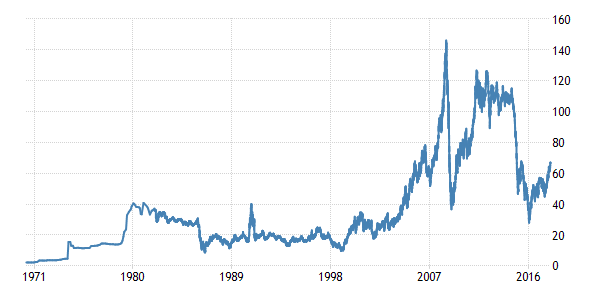 OPEC has failed to secure a complete lock on oil prices. As a result, despite periods of stability, oil prices still fluctuate wildly to this day. OPEC countries themselves may be to blame, as even the countries that did join OPEC have failed to maintain production discipline within their ranks. As cartels go, OPEC leaves much to be desired.

“A cartel is able to hold its members only when it fulfills their objective of higher prices, which has not been the case with OPEC. The member nations will now look to fulfill their objective by cheating and acting individually, according to their requirement. Saudi Arabia, which was the leader of OPEC and the price setter of the world, is losing its clout in OPEC. Even in the current round of production cuts, most of the work is being done by Saudi Arabia, whereas the other members are shying away from their designated quotas. OPEC has far outlived the average lifespan of a cartel, but if the OPEC members don’t regroup and act together, chances are that the cartel will come to an end very soon.” finance.yahoo

In short, OPEC, which has far exceeded the average life of cartels, is on the brink of failure. Though cracks have been developing in the cartel since the start of the current oil crisis, the group has managed to stay together so far. Nevertheless, the success of the current OPEC deal for production cuts will decide its future as a cartel.