This was his last tweet. He was banned for questioning vaccine dogma basically, even if he said the exact same things the CDC/various .gov authorities are saying. So, Berenson was banned for saying that the mandates are insane. 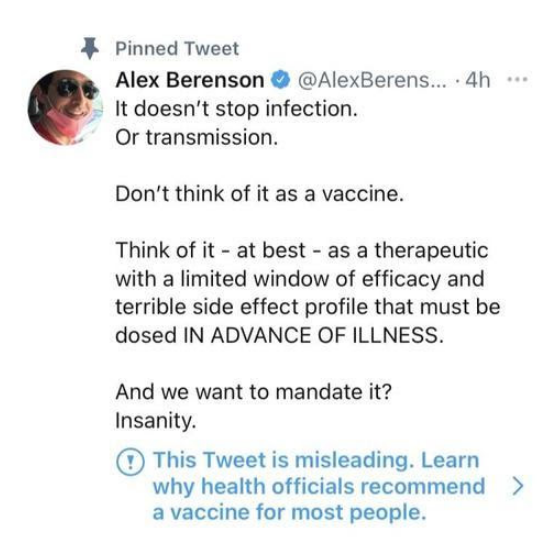 Here’s the deal about vaccine theory: the entire premise that you can inject “dead” virus into your system and initiate an immune response is faulty.

There is no point for your body to create antibodies to fight something that isn’t active.

Almost every child who has been infected with measles in the United States over the last decade was immunized for the disease. The polio vaccines spread polio for over a decade after the disease was almost wiped out.

See also  Enjoy These Moments, Because The Outlook For After Thanksgiving Is Not Promising At All

The flu vaccine does the exact same thing. It doesn’t prevent the flu, it makes a person more susceptible to infection. Natural immunity through being exposed to disease is the only way the immune system gets stronger.

Berenson's case will be thrown out.

Twitter has immunity from suit under Section 230(c)(2)(A). It is right that this is the case. If it were otherwise, only the biggest tech companies with the largest legal budgets could survive.