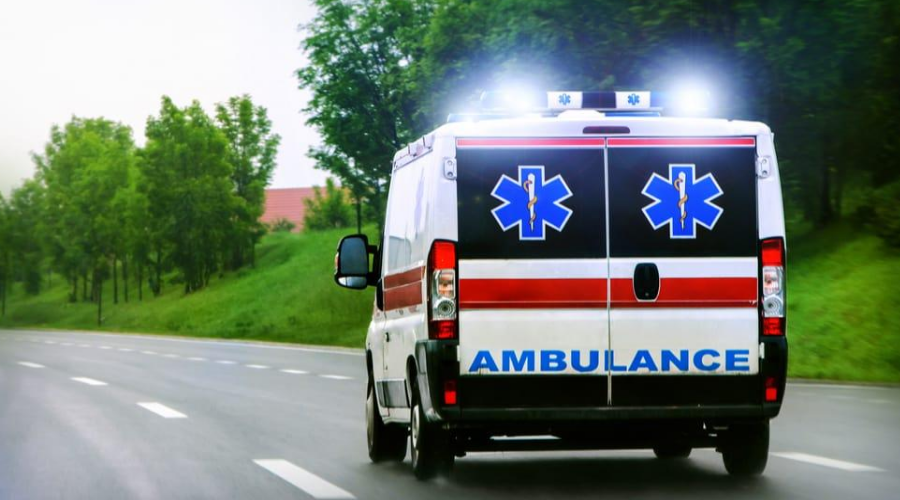 A harrowing scene unfolded in New Haven, Connecticut last week when 100 people overdosed on some form of K2, regularly and inaccurately called synthetic marijuana. While New Haven officials were responding to some 76 people, Rick Fontana, New Haven Emergency Operations Director, got a call on 19 additional reports of overdoses occuring in the same area in New Haven Green, a large park in the city’s downtown.

72 people were transported to the hospital but no one died. However, three people, considered “persons of interest,” were arrested last Wednesday in connection with the overdoses.

The drug, K2, is a synthetic cannabinoid created with a host of chemicals that can be either sprayed on dry plants and smoked or sold as liquids to be inhaled. K2 can be anywhere from 2 to 100 times as potent as THC.

There is something scary going on in America today. We are suffering from a spate of drug addiction and mental health issues. And have gone from a society that worried about what we were going to eat to one that eats so much we suffer from high levels of obesity. We seem incapable of accepting life on life’s terms, unable to stay away from a life of drugs and alcohol. We become addicted to living in an altered state of reality, suppressing our emotions, and giving in to the temptation of dangerous drugs. People are killing themselves in increasing numbers. A quarter of our population is disabled. And opioids are destroying a huge swath of the country.

What the hell is going on?

The most troublesome story in America today is the escalating opioid overdose crisis.

Every day, more than 115 people in the U.S. die from opioids, according to the National Institute on Drug Abuse. Last October, President Trump declared the opioid epidemic a national emergency. However, things have not improved at all since then.

This serious national crisis has continued to spiral out of control, even with the federal government’s increasing attention to this public health issue. Americans are continuing to abuse and become addicted to prescription pain relievers, heroin, and synthetic opioids like the deadly fentanyl. This is not only a public and social crisis. It is also a financial one. The Centers for Disease Control (CDC) estimates that the total “economic burden” of prescription opioid misuse in the U.S. is $78.5 billion a year.

It all started with pharmaceutical companies assuring the medical community that patients would not become addicted to prescription opioids in the 1990s. After that, healthcare providers began prescribing them to patients suffering from every level of pain. Opioids were regularly addictive and overdose rates increased over time to the deadly level we are at today.

The statistics below, from the National Institute on Drug Abuse, are shocking…

Another disturbing trend in America today is the rising level of life-impacting disabilities.

According to the CDC, one in four adults report having a disability that impacts major life activities, the most dominant one impacting mobility.

“Disability affects about 41 percent of those age 65 and older, compared with younger adults at 16.6 percent and middle age people at 28.6 percent. Overall, 25.7 percent of participants reported any disability,” the CDC writes.

“At some point in their lives, most people will either have a disability or know someone who has one,” said Dr. Coleen Boyle, director of CDC’s National Center on Birth Defects and Developmental Disabilities. “Learning more about people with disabilities in the United States can help us better understand and meet their health needs.”

What could possibly be linked to this level of disability in Americans? Could it be rising drug use? What could possibly explain it? We need more data on why there are so many disabled Americans today. If there is something off in our biology, we need to get to the bottom of it so we can figure out how to change this life-affecting trajectory.

Mental health in America is also an issue worth discussing.

One in five American adults suffer from a mental health condition – more than 40 million Americans. This number is more than the populations of New York and Florida combined. Has it always been this way? Or are we just better at diagnosing it? Either way, it only seems to be getting worse. Despite being the most prosperous and affluent country in the world, we are suffering from an alarming amount of mental health issues as a society.

But what is driving it?

Mental health in our youth is just as poor. I believe social media is a huge factor in this. Rates of youth with severe depression jumped from 5.9 percent in 2012 to 8.2 percent in 2015.

The most tragic part of our declining mental health is the rising suicide rate. We are literally killing ourselves.

I’ve written about this disturbing trend in the past, but I believe it bears repeating.

Suicide rates rose in all states, except for Nevada, from 1999 to 2016. Increases were seen across race, age, gender, and ethnicity, according to a recent CDC report. The scariest part of this trend is the fact that in more than half of all deaths in 27 states, the dearly departed had no known mental health condition of any kind.

In 2016, almost 45,000 suicides occurred in the United States. That number is more than twice the amount of suicides, making suicide the number 10 leading cause of death. The scariest statistic for our young adults is the fact that suicide is now the second-leading cause of death for Americans aged 15 to 34.

I don’t want to dwell on the depressing statistics too much but it is important that we talk about these issues out in the open because this is what is going on in our society. There seems to be an unknown disease spreading throughout the country. In the most technologically advanced point in the world’s history, our nation appears to be the most divided and disconnected from each other since the 1860s. We need to figure out what is going on to make so many of us want to kill ourselves, take drugs to excess, and suffer from depression and other mental health issues that cripple our lives every day.

One more notable trend that shows few signs of slowing down is America’s obesity problem.

The United States is by far the most obese country in the world. We have reached such a state of affluence that we rarely worry about people having enough to eat anymore. We are concerned about people eating too much. Our portions are far too large and there are more obese people today than there have ever been before. According to an analysis from the CDC, the average American man now stands at 5-feet-9 inches tall and weighs 196 pounds, which is up 15 pounds from 20 years ago. The average American woman is 5-feet-3 inches and weighs 169 pounds. 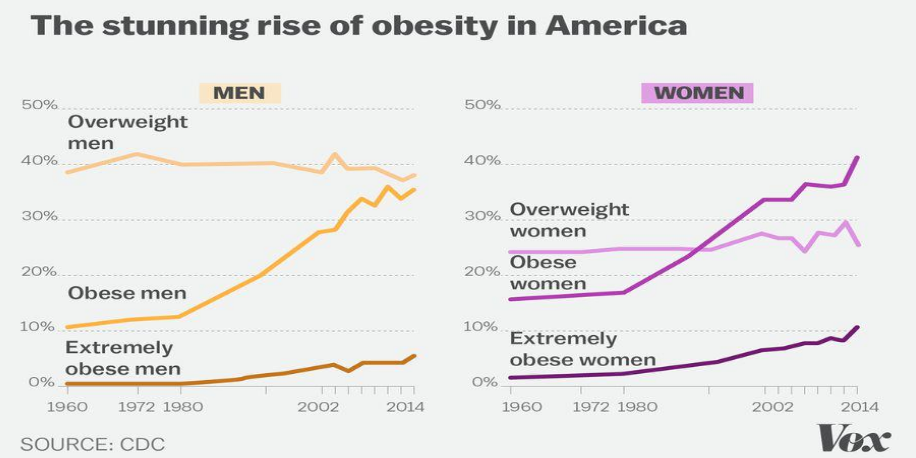 Obesity levels are projected to be even worse in the years to come. The Organization for Economic Cooperation and Development’s Obesity Update 2017 calculated that 47 percent of the American population will be obese by 2030. Approximately 50 percent of U.S. adults in 2015-2016 were considered obese, according to the CDC. That equates to 93.3 million Americans.

We are suffering from a multitude of epidemics in this country today. People are dying from preventable issues, from drug addiction and obesity to depression. We need to prioritize doing everything we can to meet the needs for this struggling segment of our society. Our healthcare must continue to evolve and adapt to meeting the needs of a population that desperately needs help.

I am very concerned for our country after researching these statistics. We need to spread the word about these escalating issues and implore our politicians and healthcare industry leaders to make significant changes to get our society back on the right track. Before it’s too late.