Sovereign credit ratings – such as those issued by Moody’s, Standard & Poor’s, and Fitch – of the emerging market countries have dropped sharply since late 2016. In Aggregate, they’re now solidly into “junk” (below investment grade) and have reached the lowest range since the Financial Crisis. Yet, despite the rising risks, “investors have allocated large amounts of their portfolio allocations to EMs relative to Developed Markets (DMs).”

These investors were induced to do so by:

In the chart below, the dark green line shows the percentage of portfolio balances allocated to Emerging Markets (dark green) versus Developed Markets. Note how this percentage has surged starting in early 2016 and how it recently has begun to recede – the outflow of the hot money. 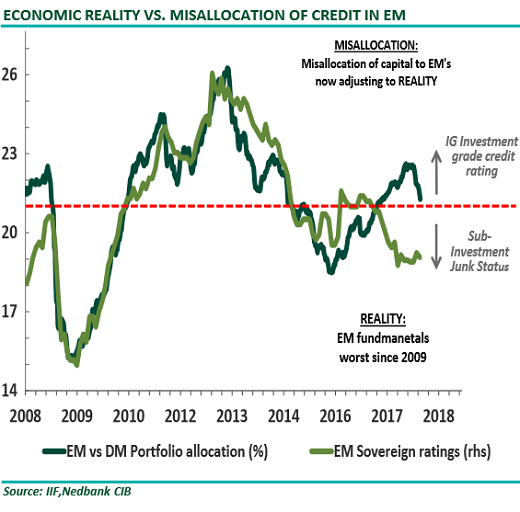 One way to monitor the ebb and flow of excess liquidity is by analyzing the changes in the value of the USD. As long as the dollar remains the reserve currency and most of the foreign owned debt is denominated in US dollars, for example in the carry trade, the dollar will remain king.

A weaker dollar and a supply of low-cost dollar-debt is associated with a stable global environment. And a stronger dollar, they note, “is usually associated with volatility and a risk-off phase as liquidity contracts.”

Since the beginning of 2018, borrowed dollars have gotten more expensive in the EMs – and hence “scarce” – as investors that were chasing yield in the EMs are suddenly having second thoughts about the risks associated with these adventures.

See also  2008 AGAIN? The Fed's Financial Stress Index just reached an all time low but the number of searches for the term “recession” on Google trends reach highest levels in 18 years

In addition, trade tensions between the US and the EMs have added to those risks for EM investors. Credit growth in China has slowed. And some commodity prices, which are crucial to some EMs, have declined.

In addition, other central banks are backpedaling on QE. The ECB, which already tapered its QE program to €30 billion a month, will taper it to zero by the end of the year. And the Bank of Japan has changed its approach as well.

“Except for an expected short-term reprieve, we expect these tighter USD conditions to remain in place for the rest of the year,” the strategists write. “That is unless policy makers react soon to stimulate financial markets with liquidity.”

“Asia is the elephant in the room.”

“Southeast Asia stands out again as in 1997/8, with a large amount of USD denominated debt outstanding,” the write. “The only difference is then Asia had fixed exchange rates and now they are floating! We believe Asia will be the next source of downside systemic risk for financial markets.”

The chart below shows dollar-denominated debt in the EMs, in trillion dollars. This does not include euro-denominated debt which plays a large role in Turkey. The fat gray area represents Asia without China: 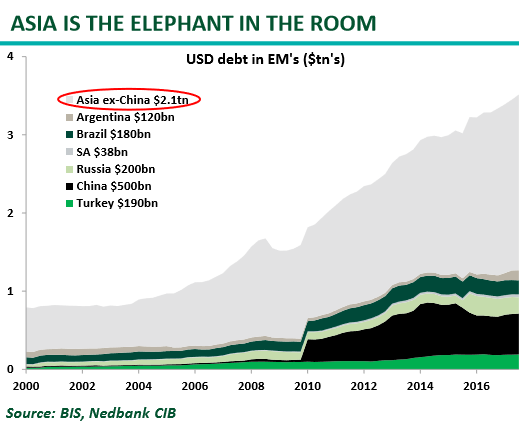 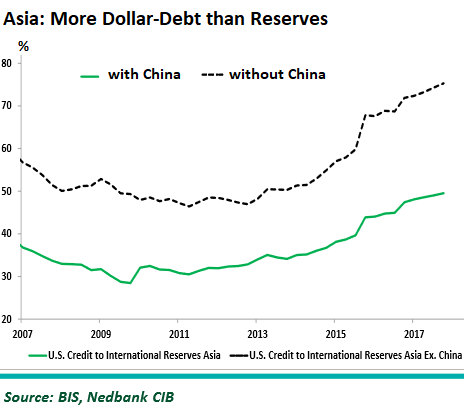 “This leaves these nations susceptible to a shortage in USDs,” they write:

The rally in the US Dollar, dented global growth prospects, credit growth in China slowing down and escalating political tensions from the US leaves these nations very exposed to a shortage in USDs.

It is very evident on this chart (below) that the changing financial conditions have been the major driver of EM and SA asset prices over the last several years. The risk-on phase ended in January and all EM assets sold-off. EM-FX are however now taking the lead and the next few days will indicate whether this will spill over into the other asset classes.

The chart below depicts four EM asset classes through 8/10/18.

See also  New Zealand PM Jacinda Ardern: ‘We will continue to be your single source of truth… Unless you hear it from us it is not the truth’ 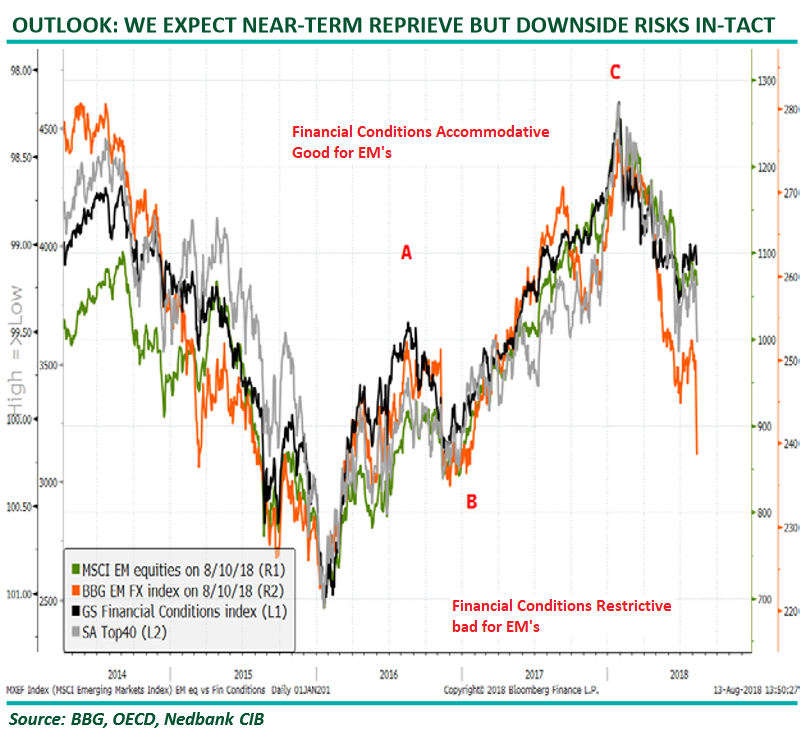 The strategists conclude: “A number of studies have emerged pointing out that the role of global factors has increased relative to country/corporate specific factors. This indicates that investors need to place more emphasis on the role of global liquidity (changing pool money and credit).”