Bank of England sees bigger financial risks than in 2008
Editor Mark O’Byrne
Stark warnings have been issued by the Bank of England and its regulatory arm, the Prudential Regulation Authority (PRA).
In less than one week the two bodies issued papers and speeches to warn industry members that many banks are showing signs of making the same mistakes that led to the 2008 financial crisis – the outcomes of which are predicted to be worse than those seen just nine years ago.
Increased risks have been noted at different ends of the financial system, from the European corporate bond markets right through to retail lenders.
The Bank of England’s ‘Stimulating Stress Across the Financial System’ was released last week. It looks at how it will assess risk in future studies on the European corporate bond market. It concludes that the corporate bond market could create more instability during the next financial shock than it did in the crisis of 2008.
Just two days before this stark warning, the PRA’s chief-executive Sam Woods told lenders that they were on thin ice with their innovations designed to reduce their capital requirements and buoy earnings. Woods said that whilst their innovations “might meet the letter of the regulation” they must not be “designed to circumvent the spirit” of banking rules.
Bank of England’s Woods accused banks of engaging balance sheet trickery to “circumvent the spirit” of post-financial crisis rules.
Both warnings over both sets of practices is yet another reminder of the stark difference of interests between taxpayers, regulators and the banking industry.
News of institutions circumventing regulations and non-bank corporate lenders creating more risk in the system begs the question if the financial system as we know it will ever be fit for purpose in terms of looking after the needs of borrowers and savers. It also rises concerns about how safe the banks are for depositors and whether banks are ‘safe for savers?’ Balance sheet shenanigans
One of the ‘innovations’ being used by banks is the very same that was used in the run-up to and exacerbated the 2008 financial crisis. It is the use of special purpose vehicles which are used to hold riskier assets in order to free up capital.
Woods told the news conference:
“We have noticed that some institutions are now moving on-balance-sheet financing to off-balance-sheet formats using special purpose vehicles, derivatives, agency structures or collateral swaps.”
Practices such as these are being done in order to reduce the burden of new rules which have come or are coming into play. The Bank of England and the regulatory authorities are close to completing and implementing the reforms that were agreed to following the 2008 crisis.
However the changes designed to make banks less risky have meant margins are being squeezed from two directions, both by new regulations and record low interest rates.
The regulators’ concerns over these practices are that they circumvent a regulation designed to protect taxpayers from yet another bank bailout. These are the ring fencing rules much lauded about following the financial crisis. They require that those banks and building societies with more require financial institutions with more than £25bn of deposits to tie off their retail divisions from the riskier investment banking units by 2019.
This is the most costly of the reforms being put into place, rumoured to have a price tag of billions of pounds.
Widespread illiquidity leads to panic
Meanwhile, on the other side of the market (but still as entwined and as risky as banks’ circumvention tactics) the Bank of England study has shown that they have some significant concerns about the effects of non-bank lenders in a stressed market, particularly on corporate funding rates and their impact on the real economy.
The central bank is primarily concerned that those dealers making markets in bonds will not be able to cope with panic-selling levels by investors. The study found that 2008 levels of weekly mutual fund redemptions  (1 percent of assets under management) could increase corporate bond interest rates for companies with high credit ratings by about 40 basis points. 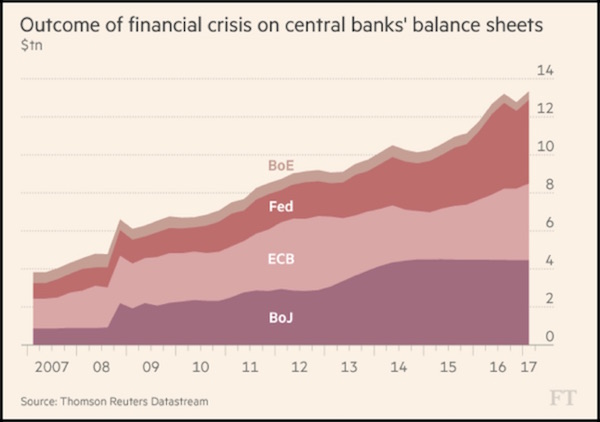 Dealers might struggle to absorb these sales if redemptions are only a third higher, an event which the study described as “an unlikely, but not impossible, event”.
Whilst the study states that this was an incomplete exercise in assessing the risk in the system, it was clear that it had raised cause for concern namely due to such risks creating a feedback loop between individually safe parts of the market that amplified the shock.
“Nevertheless, it has allowed a scenario to be explored in which large-scale redemptions from open-ended investment funds trigger sales by those funds, with resulting spillover effects to dealers and hedge funds.”
Concerns over how widespread illiquidity can lead to panic amongst investors is fresh in regulators’ and institutions’ minds following the episode post-Brexit vote when there was a run on real estate funds and a temporary ban was placed on withdrawals following the surge in redemption requests.
There is little reason why, given the right set of economic circumstances, such an event wouldn’t happen in the corporate bond market.
Currently there are two events in the near future which could prompt a sell-off in corporate bonds.
The first is a potential reduction in the monthly €60 billion of securities the ECB currently buys. Should they decide to reduce these then investors may dump bonds in favour of equities, cash or gold.
The second potential problem is of course Italy. The general election is due to happen before next May and should Eurosceptic party, the Five Star Movement, win then we are likely to see panicked bond selling. Worries about corporate bond markets or balance sheet shenanigans by banks do not seem to be causing much concern amongst the UK electorate and savers. But a quick snapshot of how finances look at a household level should be provide a much needed wakeup call.
A decade on, what damage can be done
Woods’s speech about the state of banks’ clever balance sheets was ultimately about their desires to return ‘to the punchbowl’ as they try to boost credit and risk. The chief executive said that his organisation had seen”a shift in credit risk appetite as lenders compete with each other to find ways of widening the pool of available borrowers, increasing the size of loans available to them, or reducing the credit premium charged for inherently more risky loans.”
The state of the things at a retail level is somewhat terrifying. Household lending is growing at 10.3% a year – outpacing the 2.3% rise in household income. The total credit owed by UK consumers at the end of April 2017 was £198 billion, with credit card borrowing at a record £67.7 billion. The BOE is so concerned that it has told lenders to set aside £11.4 billion to protect against defaults.
More concerning about the state of household debt is that Bank of England data shows 15.75pc of all new mortgages taken out in the first quarter of 2017 were for terms of 35 years or more.
But, the latest growing area of debt is car financing. £58 billion of car dealership finance. Just £24 billion of this comes from banks. The rest is from other lenders, such as dedicated motor finance firms. They do not have to follow the strict lending rules on having capital buffers to cover losses like banks do – a development the Bank of England is concerned about.
It has been ten years since the last interest rate hike. A decade is a long-time, enough time for the market to welcome in a new generation of borrowers who are unfamiliar with higher interest rates and the dangers of borrowing. Most concerning is it seems no matter who they borrow from, they are disinterested in the state of regulatory demands.
It has been more than a decade since 60+ banks and building societies were issued a similar warning in 2004. Many failed to listen to the warnings given.
“As survivors, societies here today ought to be well aware of the warning signs, but I’m conscious that corporate memories can be shed surprisingly fast…I would observe that part of the reason why only 44 societies are attending this conference rather than the 60+ that came to its equivalent in 2004 lies in the fact that many of those societies were unaware of, or failed to control, the risks they were taking.”
– Sam Woods of PRA
Similarly aware of this lack of insight, the Bank of England recently asked lenders how these new borrowers affected the banks’ credit-scoring models, as the banks themselves are the first line of defence when it comes to protecting the economy (and taxpayers) against increased risk.
Sam Woods’s speech last week suggest that banks and building societies are most likely unconcerned with the risk these new borrowers bring to the system.
In May, the British households borrowed £1.7 billion in May, higher than the £1.4 billion that forecasters expected and the £1.438 billion borrowed in April. This rapid growth of consumer credit will pose a risk to banks when the economy falters and borrowers struggle to repay the loans.
Conclusion
These warnings from the Bank of England and the PRA just serve to remind us that there is little in the financial system which is not exposed to the highly speculative and risky lending practices of those charged with looking after our savings and investments.
Even if some banks are listening to the warning cry of the regulators, the level of debt in the financial system in the UK and most western countries is completely unsustainable.
Ultimately all of the above means that your personal finances and your savings held in deposit accounts are at risk. The risk is that when authorities move to bailout the next bank who enjoyed the punch a bit too much, your savings may be confiscated in bank deposit bail-ins.
Why do we like physical gold and silver? Because when you buy it in the right way, you own it outright.
When you own physical gold and silver coins and bars which is allocated, segregated and in your name, it cannot suffer a ‘haircut’ or be confiscated by bankrupted financial entities. Bullion coins and bars are yours and carry no counter party risk if you take insured delivery or store in the safest vaults in the world.