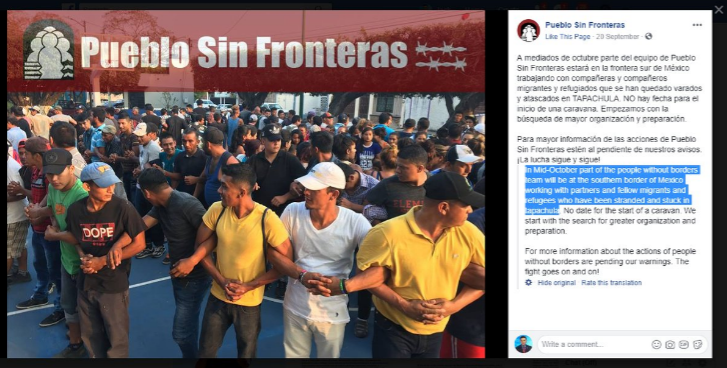 As I already predicted in yesterday’s article (Midterm Distractions: Pipe Bombs, George Soros Funded Caravans and Conspiracy Theories), the Bombocaust is already starting to show signs of being nothing more than a false flag:

Wow, potentially explosive devices…as in, this is potentially big news. By the time everyone has already forgotten all about this extravaganza, we’ll have the forensics report probably saying these things were made to look like bombs. Remember where you read it first.

Here’s NBC News today: POORLY MADE, SOME INCAPABLE OF EXPLODING… say it ain’t so MSM!

And people are beginning to realize the purpose of this scam, as I already told you yesterday:

I’m willing to bet that, while on its surface this appears to be intended to interfere in the midterms, the true purpose of this staged attack is to move press coverage away from the caravan for a while. It was a very dangerous thing for normal people to be shown pictures/video of a roving brown horde this close to the midterms, so the Left has to pivot to cast the millionaires and billionaires that run their party as the true victims here. Don’t look at the caravan, look at us getting almost kinda bombed by devices that weren’t actually able to explode.

So, here we are, 24 hours later: more drama, more distraction.

Meanwhile, the migrant caravan keeps on moving towards El Norte. The good news is that Mad Dog Mattis promised to send at least 800 US troops at the border, in order to help border-patrol mitigate the issue of illegal immigrants swarming US mainland.

The troops will provide wall materials, fencing and various tech-support at some key points along the borders, where the 10,000+ migrants are expected to cross. President Trump himself declared the incoming caravan to be a national emergency on Twitter on Thursday morning:

Brandon Judd of the National Border Patrol Council is right when he says on @foxandfriends that the Democrat inspired laws make it tough for us to stop people at the Border. MUST BE CHANDED, but I am bringing out the military for this National Emergency. They will be stopped!

We already know they’re not sending their best.

.@DHSgov can confirm that there are individuals within the caravan who are gang members or have significant criminal histories.

The bad news is that the troops sent at the border to help reinforce border-patrol are largely unarmed, and they’re nothing more than support personnel for DHS. So, we’ll have troops at the border, but without weapons. Seems fearsome, alright. How about tens of thousands of troops? Armed, eventually to the teeth and all that?

If these uninvited people come within 50 miles of the border, how about invading Mexico and establishing a security perimeter outside the US?  Mexico has already thrown their support behind these invaders. This is no longer an allegation or speculation, it is a clear and present danger. An invasion should be repelled by US troops. These are not American citizens they will be restraining. They can man water cannons and shoot rubber bullets at them before they even reach our borders.

Moreover, look at how Israel deals with Palestinians trying to enter force the border. We could learn from our “greatest ally in the Middle East”; what’s good for Israel when it comes to defending their borders should be good for America, isn’t it?

After all, what’s wrong with using live ammunition against lawless criminals? If these people are doing this deliberately and refuse to stop, knowing it’s ILLEGAL, but they don’t care, what else is to be done? Ask them nicely? Surrender to a mob of illegals? They just want all the freebies the U.S. gives! They’re just a lawless mob. For every child and woman they’ll push forward as they reach our border, there are 200 men between the ages 18 to 35.

Don’t get me wrong: I don’t want to see anyone shot down. I just want them to turn around and go back to their own countries. There is a right way and a wrong way to come to the US. There’s an old rule, you never negotiate with terrorists. We should start enforcing it now, before it’s too late.

Technically, the government of Honduras or Guatemala is not an oppressive government, as in  they do not generally restrict religious freedom or political freedom in any significant way. I am aware that Honduras is filled with crime, but so is Chicago and Los Angeles; so gang violence and crime is not a suitable reason for asylum by any US standard, right?

To tell you the truth, I have lost confidence in the President and Congress to do the one job assigned to the federal government; the POTUS could send armed military to the border to actually do the job of repelling this invasion, but he won’t because he’s afraid some lib scumbag will scream posse comitatus, which has no bearing in this situation.

I know the optics would be awful with the midterms and all, but any degree of success on the part of this criminal mob will be disastrous in that it will encourage more such disgraceful episodes. These people even carry the flag of other nations before them, and they have desecrated our flag. They are not able to claim asylum, and they should be stopped at the border, using whatever means are necessary.

We need to remember that this is a political demonstration, paid for by Democrats and George Soros. These people are being sent here to provoke a confrontation between themselves and U.S Border Patrol agents and the U.S. Military. It is designed to occur so that the media worldwide will televise it. The people participating and the people funding this project are evil to the core. They want to see dead women and children. It is no different than what the Palestinians do with their women and children, i.e. they use them as human shields.

We have to keep in mind that those on the left are filled with hate for this nation, filled with hate for white people, filled with hate for Christians, and filled with so much evil in their hearts that they encourage these people to bring their children here. and to risk their children’s lives so that the event can be captured on television. This is the type of people we are dealing with here. The people in the invading horde are ignorant pawns, duped into participating via a promise that will never really be given to them. Some have already died on the journey. Many more will be afflicted with sickness and disease before they arrive. But that is their problem, not ours. We should not provide them with food, water, Port-a-Potties, facilities to bathe, medicine or medical care, NOTHING! In addition, those who financed the journey should be forced to pay for the clean-up of all of the waste and filth that will be generated by this horde.

This is an invading army. They carry the flag of foreign nations before them. They must be stopped.