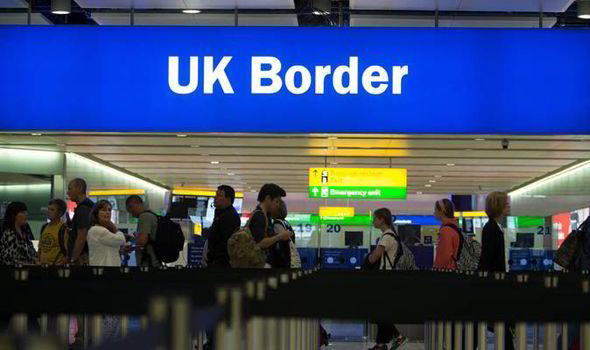 When politicians and experts talk about the effects, costs and benefits of immigration, it is easy to assume that any differences they may have with your own opinions are subjective; that they have looked at the data and drawn different conclusions. But what if it was all a fantasy? What if the data they base their policy, spending, in fact everything on, is nothing but a fiction? It might lead you to believe that we are living in dangerous times where no one can be trusted and nothing can be assumed as factual. Welcome to the reality of modern Britain.
As it turns out, immigration figures to the UK are not only wrong, but the people responsible for this don’t actually even know how wrong they might be. And this is because…NOBODY IS COUNTING. It was a surprise to me, too. At the very least, I assumed that one poor chap in a crappy uniform was hanging out with a clicker and a clipboard, but no, alas, not even this. Immigration figures in the UK are in fact based on “international Passenger Surveys” (IPS) which are quite simply questionnaires carried out on “some” passengers (they were originally designed to help guide tourism policy). Here is what they DON’T DO:

They do however try and survey 300,000 people per year out of an estimated 200,000,000 (so around 0.2%). They ask the questions in English only, so those who don’t speak English can’t answer anyway. And they do cost the taxpayer an enormous amount of money for information that is essentially worthless.
An interesting statistic (courtesy of Breitbart), is that in 2005 when the UK opened its borders, of almost2 million people questioned at the main airport hubs, only 79 people actually admitted to being migrants. This figure is ludicrously small and clearly inaccurate, yet these are the numbers on which immigration figures are based.
The system is not fit for purpose; do not believe anyone when they tell you about studies based on immigration figures: because there aren’t any. One question remains: As immigration is polled as the single biggest issue for voters, why is the government not looking at actually getting correct data and measuring the numbers? Is it because they know the real figures, and fear a backlash if they were known to the public?

1 thought on “Counting Immigration and Other Fanciful lies”