Fundamentally GDP is annual but debt is cumulative. Does this matter?

Of course it matters.

That’s a train wreck in the making.  A long time in the making, and a heck of a lot longer than if we had a competent AI program running the show that could actually calculate forwards a tiny bit and come to a c proper conclusion.

Humans are blessed/cursed with an optimism bias (subject of a future podcast with a neurobehaviorist) and so we like to imagine that somehow things will sort themselves out at a later time.

But here’s one important chart for this discussion; Total Credit Market Debt vs GDP: 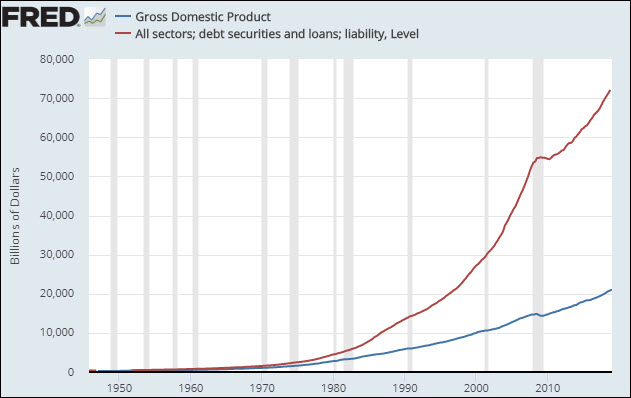 If the debts are claims, and they are, it’s not terribly difficult to work out that they are only useful as claims on the output of GDP.  Future money buys us future things.  Goods and services.  If there’s one unit of future claims and one unit of future “stuff” then all is well.

But what happens when there are 10 future claims and only 1 (one) unit of stuff?

There’s an imbalance to be sorted out simply via destruction of the claims.  Whether that’s by an inflationary outcome or a deflationary burn is the only open question.

But AI would be able to dispassionately conclude that one way or the other the claims were worthless today.  They can be discounted today and one does not have to wait for some bonfire of the vanities to rage along and take your portfolio up in smoke at the same time as everyone else’s.

I have another chart, I can’t seem to locate right now (and I’ve got to head out in five minutes for a range session), which shows that if you subtract US federal deficit spending that US GDP would have been negative ever since 2010.

If or when the US government ever decides it cannot keep running larger and larger deficits, then GDP will contract.

(It’s simple math that Steve Keen showed us a while back.  A 3% deficit this year needs to be 3%+ something next year or else GDP will take a hit).

I think too that AI, or a mathematically competent grade-schooler, could easily work out that one cannot run larger and larger deficits forever.  So there’s a reckoning at some point, the difficulty being that moment comes with the largest ever pile of federal debt on the books, and a falling economy, which is a bad mix.