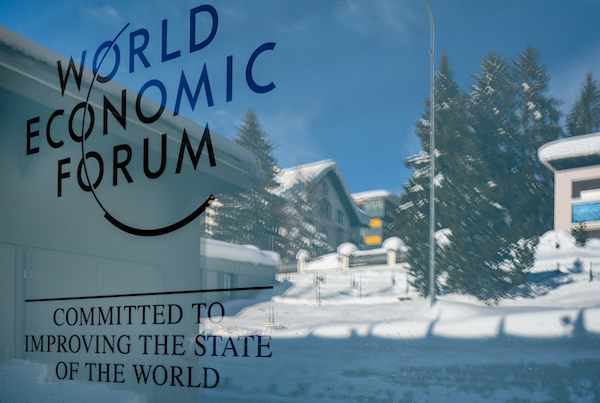 The WEF sees the COVID pandemic as an opportunity to reshape the economic and social structures of the world.

With the unpleasantness of 2020 and 2021 behind us, what do you think will be the next phase of their global agenda?

Doug Casey: For many years, conspiratorially oriented people have looked askance at the Council on Foreign Relations, Bilderberg, Bohemian Grove, Concordia, WEF, and similar groups where the rich and powerful people gather to wheel and deal.

Despite my visceral dislike of these people, I actually accepted an invite to Concordia out of curiosity and wrote an article about it. I won’t be going back because it’s simultaneously boring and disturbing to be in the company of self-important bureaucrats, opportunists, and slimy rent-seekers.

These people predictably make a huge deal about COVID. The pandemic impresses me as about 90% hysteria from a medical point of view. You don’t want to get it, obviously, but unless you’re old and sick, it appears to be just the flu, especially now that it’s burning out, the way viruses do. The average age of decedents is about 80—a fact which is never reported. We’ve certainly never seen carts going through the streets crying, “Bring out your dead. Bring out your dead.” But I personally know people who think it’s stalking them like an assassin. The hysteria has mutated into mass psychosis.

Governmental reaction to the flu, actively promoted by the groups I just mentioned, has reshaped the way the world works. It’s definitely a crisis these miscreants haven’t let go to waste. In fact, what’s gone on over the last two years is probably the biggest upset in world history, at least since World War II—and that’s saying something. It’s been a real catalyst for the “Great Reset” promoted by these powerful busybodies, and it’s still evolving. We could see genuine chaos before 2022 is over.

So what’s next, now that the whole world seems to be going insane? Billions of thoughtless people have been terrified; they’re ripe for the next medical emergency, real or imagined. In order to be proactive, our faux guardians in government are undoubtedly going to attempt something like a vaccine passport. That way, when the next thing comes up, they can pretend to react quickly and more easily get the masses to do what they’re told.

Of course, this is all highly destructive. Your health is something that should be between you and your doctor—not some DMV look-alike government employee.

International Man: The short video released by the WEF during the pandemic included a strange statement about the state of the world by 2030—“you’ll own nothing and be happy.”

What do you think this implies about individual freedom and private property?

Doug Casey: One big change over the last two years is that, for the first time, people are spending many hours a day binge-watching television. Of course, people have watched “too much” TV for decades, but now billions have been under virtual house arrest with nothing to do but glue their eyes to the flat screen and absorb massive amounts of indoctrination. These insane lockdowns have prevented billions of people from both working and socializing. They’re in enforced isolation, virtual prison.

TV and welfare are a very effective update of the old Roman concept of “bread and circuses.” A flat-screen TV with 1000 channels—everybody has one—offers a much easier and better way to kill time than going to the Colosseum or Circus Maximus, especially from the point of view of the rulers, since the proles can be indoctrinated while they’re isolated. That decreases the odds of the natives getting too restless.

Meanwhile, governments everywhere have been sending their populations loads of free money, so they can sate themselves with junk food. Biden’s Build Back Better program will pass in some form, making bread and circuses a permanent feature of life in America. Our version might be called “Pizzas and Netflix.”

The people who frequent forums, such as the WEF, see themselves as a special class―the elite. They all know each other, go to the same schools, and socialize at the same clubs. They have high incomes, a lot of power and influence, and groom their kids to join the party.

They’ve jelled into an informal ruling class. Even while they mouth hypocritical platitudes about democracy, diversity, equity, and other PC nonsense, they, in fact, despise the common man. I wouldn’t be surprised if they would really like to see―as people such as Ted Turner and Bill Gates have intimated―80% of the world’s population to just disappear. That way, when they visit places such as Machu Picchu, St. Mark’s Square in Venice, and other fashionable places, they won’t be annoyed by the hoi polloi wandering around as if they were equals. Enough money and power can get the elite to start thinking that way. Not to mention that these people are mostly sociopaths, with a heavy admixture of real psychos.

Perhaps they’d like to see the “nonessential” proles isolated in their apartments, sedated by Xanax and Prozac, stuffed with cheap carbohydrates, stimulated by Fentanyl and meth, and programmed by the MSNBC, while their “betters” figure out what to do with them. I suspect my hero Charles Knight will have to confront this problem in the next novels in the series John Hunt and I are doing.

International Man: What drastic economic and social changes need to take place for the WEF’s agenda to become a reality?

Governments throughout the world have grown like cancer throughout the 20th and 21st centuries. Look at a chart showing the percentage of the economy controlled by states everywhere in the world over the last 100 years. The state has gone from being a minor nuisance—taking a small part of the economic production—to now controlling 30, 40, 50%, or more everywhere. Even with massive income taxes, 20% Value Added Taxes, gigantic borrowing, and catastrophic currency inflation, governments everywhere are bankrupt. We’re at a tipping point.

Governments have become very powerful, and they’re getting even more powerful. It’s an accelerating trend. Financial, tech, and media corporations, in particular, have turned into behemoths by merging with each other, working hand-in-glove with the government. Their nomenklatura, aided by an inflated stock market, has been enriched by the revolving door between the state and corporations. It’s Mussolini’s dream of state corporatism, i.e., fascism, come true on a grand scale.

Meanwhile, most humans have become cattle-lookalikes. The only question is whether we’re feedlot cattle or free-range cattle. The feedlot cattle, standing shoulder-to-shoulder eating silage at the feed trough, are like the old proletariat. They have no personal efficacy at all.

The upper ranges of the middle class are more like the so-called free-range cattle. They have a bigger field to wander around in, get to eat grass, and have the illusion of freedom. But it’s important not to kid yourself about the big picture.

International Man: In the background of all of this, many governments are entertaining the concept of Central Bank Digital Currencies (CBDC) as a solution to their failed monetary policies.

All the fiat currencies in the world are backed by nothing, and they’re being printed in enormous quantities. What does a CBDC mean for the viability and future of government-issued fiat money?

Doug Casey: Central Bank Digital Currencies are a truly big disaster. They’re coming down the road, barreling toward us like a maniac’s truck in Road Warrior. The ubiquitous smartphone has made them almost inevitable.

Everybody has a smartphone; it’s convenient and always with you. People are attached to them like appendages. You can access everything else on your cell phone today—so why not money? Feedlot cattle everywhere will go for CBDCs with enthusiasm. It’s already happened to a great degree in China and Sweden. CBDCs give the government total knowledge and control of everything you buy, sell, or own. The feedlot cattle love it; they believe the State is their friend. Free-range cattle may need some prodding, but they’ll go along to get along; they won’t want to lose their privileges.

The whole world is being propelled towards CBDCs. When your whole financial life is necessarily on your cell phone, and cash doesn’t exist, the State will know—everything—you’re doing, where you’re doing it, and with whom. The process will be aided by an omnipresent camera and your frenemies, Siri and Alexa.

See also  The Great Tampon Shortage of 2022: The Supply Chain Problem No One’s Talking About

It will tie in nicely with our evolving social credit system like the Chinese now have. Your score might get dinged by what you say, whom you talk to, and where you go. But most cattle like it; it makes them feel safe and virtuous.

Like cattle, most people rather like a welfare state; it’s not unpleasant being given food while you can sit there and watch your television or play with your smartphone all day. It’s actually pretty comfortable being a feedlot cow—a lot more comfortable than trying to be a wild buffalo that has to forage to fend off starvation and fight for survival. So, of course, the world is changing in that direction.

We really are headed towards a Great Reset that Klaus Schwab and his criminal pals anticipate. However, the fact that they have plans to put everybody in a well-ordered and comfortable feedlot doesn’t repeal the laws of economics. The Greater Depression isn’t going to disappear.

On the bright side—and I always look at the bright side—today’s corrupt system is likely to collapse in the onrushing crisis. It is, to use an overly popular word, unsustainable. Currencies will lose value radically. Markets will go up and down like an elevator with a lunatic at the controls. On the dark side, things usually get worse during major tumult—France in 1789, Russia in 1917, and China in 1949 are examples.

I continue to anticipate that the Greater Depression is going to get much more serious this year, even though increasing levels of debt and high government spending are papering things over for the moment. In fact, I’m starting to think that “Greater Depression,” a term I coined, understates the situation.

The likely next step is a major financial upset, cascading into serious economic problems, at which point all the feedlot cows are going to clamor for “strong” leadership. They’ll get what they ask for.

The Jacobins in control in Washington, DC—for at least the next three years—won’t let the crisis go to waste. From there, things could slide into social chaos similar to what we saw in 2020. And perhaps a serious war; governments everywhere love to blame foreigners for domestic problems.

The 2020s could be the nastiest decade that we’ve had since the Industrial Revolution of the early 1800s—notwithstanding huge advances that continue to be made in most areas of science and technology.

International Man: What does this mean for the average person? What should he do?

Doug Casey: Number one, produce more than you consume. Save the difference. Put your savings in the safest form possible, which basically means gold and silver coins in your own possession.

Number two, try to have meaningful assets outside of the political jurisdiction or country that you live in. Financial risks are huge today, but political risks are even greater.

Number three, perfect your skills as a speculator. Most of the real wealth in the world will still be here when 2030 rolls around, but a lot of it will have changed ownership.