Technical analyst Clive Maund takes a look at a biotech stock that he views as a strong buy.

3D Signatures Inc. (DXD:TSX.V; TDSGF:OTCQB; 3D0:FSE) is an exciting biotech company that now appears to be getting its act together fast, which is reflected in the recent action in its stock, although it is certainly not too late to buy the stock, otherwise we wouldn’t be interested in it. With respect to the fundamentals it is liked here by AlphaNorth Capital’s Steve Palmer for the reasons stated briefly in his recent article looking at three Small Caps that he favors.
We’ll now see what the charts have to say about it. On an 18-month log chart we can see all of the action in the stock since its inception, and the log chart has the advantage that it opens out the recent base pattern that has just completed, so that we can examine clearly what has been going on. As we can see, the severe decline through most of last year led into a fine large Head-and-Shoulders bottom formation that it started to break out of only a week ago. It didn’t hold a clear breakout and has dipped back to support at the upper boundary of the base pattern. This of course was partly due to the broad stock market diving, but as far as its chart is concerned it was due to a still challenging moving average alignment—we have yet to see a cross of the moving averages and the 200-day is still falling steeply—basically it needs a little more time, which is why it reacted back. Additional bullish points to observe on this chart are the high volume on the breakout move—the highest for about 10 months—which is bullish, the now climbing Accum-Distrib line, also positive and the improving momentum that has swung from negative to positive. 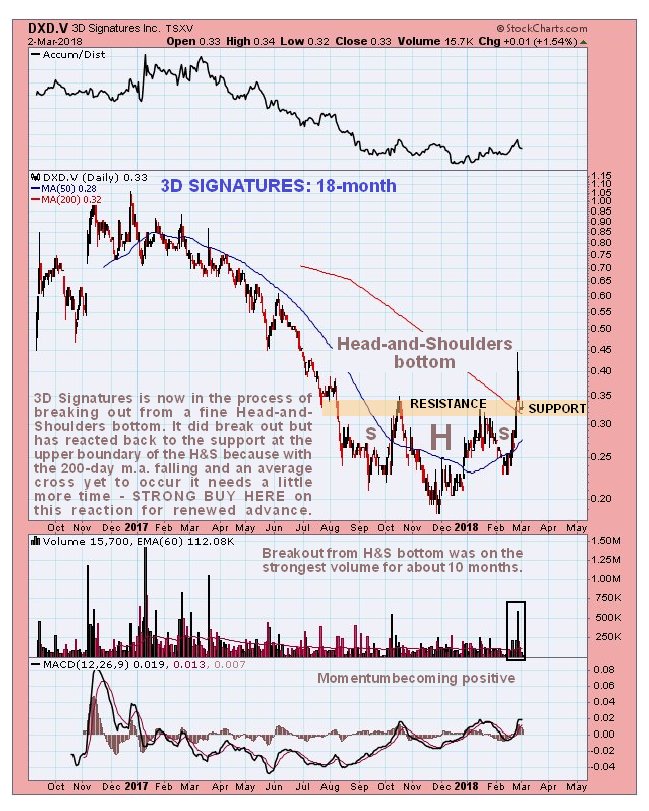 The 3-month chart is valuable here as it enables us to see recent action in much more detail. Observe first the heavy volume when it broke out of the Head-and-Shoulders bottom about a week ago, which is bullish, and it is thanks to the broad market drop and still challenging moving average alignment, as mentioned above, that it has dropped back to what is considered to be a good entry point, given that we missed the opportunity to buy it near to the Right Shoulder low of the H&S pattern. Two factors that we can see to advantage on this chart that strongly suggest that it will turn higher from here are that it has reacted back to support at the January highs and the upper boundary of the entire base pattern, and also that volume has shrunk back to a very low level as it has reacted back, suggesting that there are few sellers at lower prices, because holders do not want to sell, for good reason. It could react back a little further but it is considered more likely that it will advance from here. 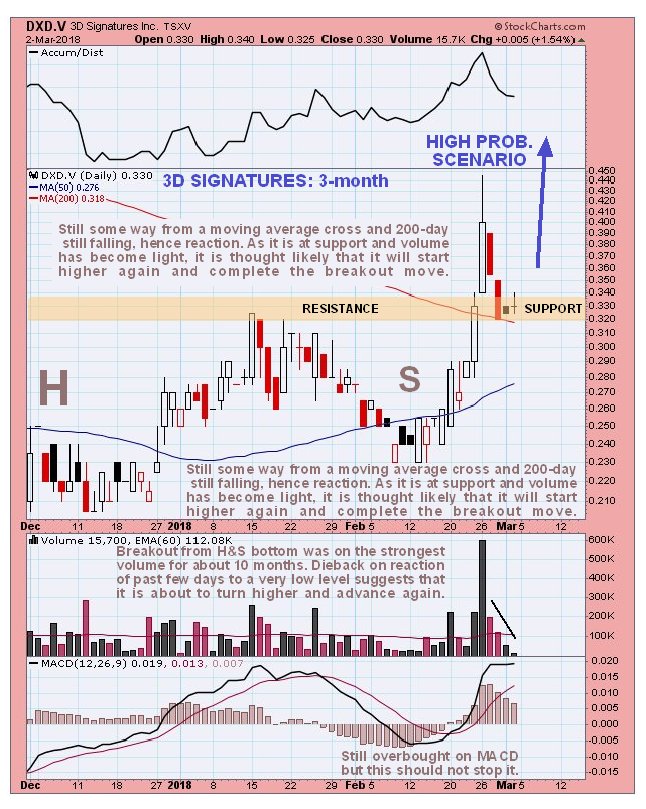 Conclusion: 3D Signatures is viewed as a strong buy here for a resumption of its advance to complete its breakout from its large Head-and-Shoulders bottom pattern, which should usher in a major bull market advance in this stock. The company’s stock trades in rather light volumes on the US OTC market, which are expected to improve as it advances.
3D Signatures website
3D Signatures Inc, DXD.V, TDSGF on OTC, closed at C$0.33, $0.252 on 2nd March 2018.
Clive Maund has been president of www.clivemaund.com, a successful resource sector website, since its inception in 2003. He has 30 years’ experience in technical analysis and has worked for banks, commodity brokers and stockbrokers in the City of London. He holds a Diploma in Technical Analysis from the UK Society of Technical Analysts.
See also  BREAKING: Pentagon on lockdown after multiple shots fired...
See also  Alibaba Stock Price Forecast - Crash To $100 Possible
519 views