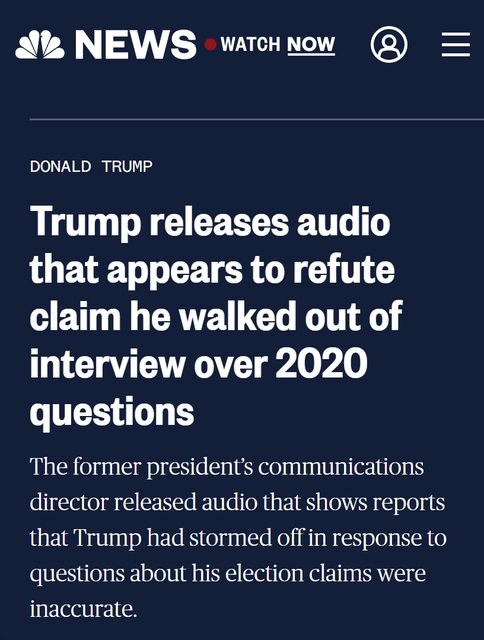 NEW: Trump didn’t storm out on Piers Morgan, according to audio obtained by ⁦@NBCNews⁩

This had to be utterly indefensible conduct and editing by Piers Morgan if NBC is coming out to defend Trump. t.co/MB8QIcYjl3

A @politico journalist shared the fake Trump video too, reporting it as real pic.twitter.com/qB8wCIKihN

ATTN @PolitiFact – when will your factcheck on this deceptively-edited video be completed? t.co/jd3ix94kxu

Audio provided by former President Donald Trump’s team to Breitbart News of the end of Trump’s interview with Piers Morgan proves that Morgan and his team deceptively edited the interview to make it appear as though it was a contentious ending when it was not.

A 30-second promotional clip that Morgan released on Wednesday afternoon seemed to show Trump flying off the handle and walking out mid-interview as a righteous Morgan asked him tough questions about his views on the 2020 election. But the full story seems to indicate that Morgan’s team deceptively edited the clips together to make it as nasty as possible for Trump—and to drive up the ratings for Morgan’s new show. Morgan’s new show, Piers Morgan Uncensored, launches next week on Talk TV, a subsidiary of Rupert Murdoch’s News Corporation.

See also  Fauci is trying to get Trump re-elected?

“This is a pathetic attempt to use President Trump as a way to revive the career of a failed television host,” Taylor Budowich, Trump’s communications director, told Breitbart News. “It is also another example of President Trump being right, as he told Piers Morgan that the host was dishonest to his face, and Piers, for the first time in his life, didn’t disappoint.”

The 30-second clip that Morgan’s team released splashed across tabloids and media outlets, taking the lead spot across the Drudge Report with multiple links accusing Trump of having a “meltdown.” In it, Morgan splices several clips together that make it seem like as on-screen graphics and a deep male voice over says that Trump is a “former president in denial” over the 2020 election. The promo, which calls it “the most explosive interview of the year,” pulls a few short clips of Trump calling Morgan “a fool” and saying “this is very dishonest” and “let’s finish up the interview,” before showing Trump standing up and walking away and saying “turn the camera off.”

But that’s not what happened—not even close. Trump spent more than an hour with Morgan, and the way the promo clip cuts together what it calls “Morgan Versus Trump” moments to promote the interview which will air on this coming Monday night is particularly deceptive. Most of those moments had nothing to do with the election issue at all, and the full audio of the last bit of the interview shows that Trump standing up and walking away and saying “turn the camera off” came after Morgan ended the interview and thanked Trump for a “great interview.”

See also  Elon Musk says he would reverse Trump's suspension from Twitter and called the ban "morally wrong" and "flat out stupid."

The audio file obtained by Breitbart News, which is about seven and a half minutes long, begins with Trump spokesman Taylor Budowich interjecting into the middle of the interview to tell Morgan to wrap it up. “We’re an hour in,” Budowich says. “We need to wrap.”