July FOMC minutes hit the gold prices. But what’s next for the yellow metal?

The key event last week was the publication of the minutes from the FOMC meeting in July. After their release, the U.S. dollar jumped, while the price of gold dropped, as the chart below shows. Why? Well, the Fed officials disappointed investors who expected some clues about upgrading the U.S. central bank’s forward guidance in September. In other words, the Fed failed to provide any new guidance as to the interest rate expectations. 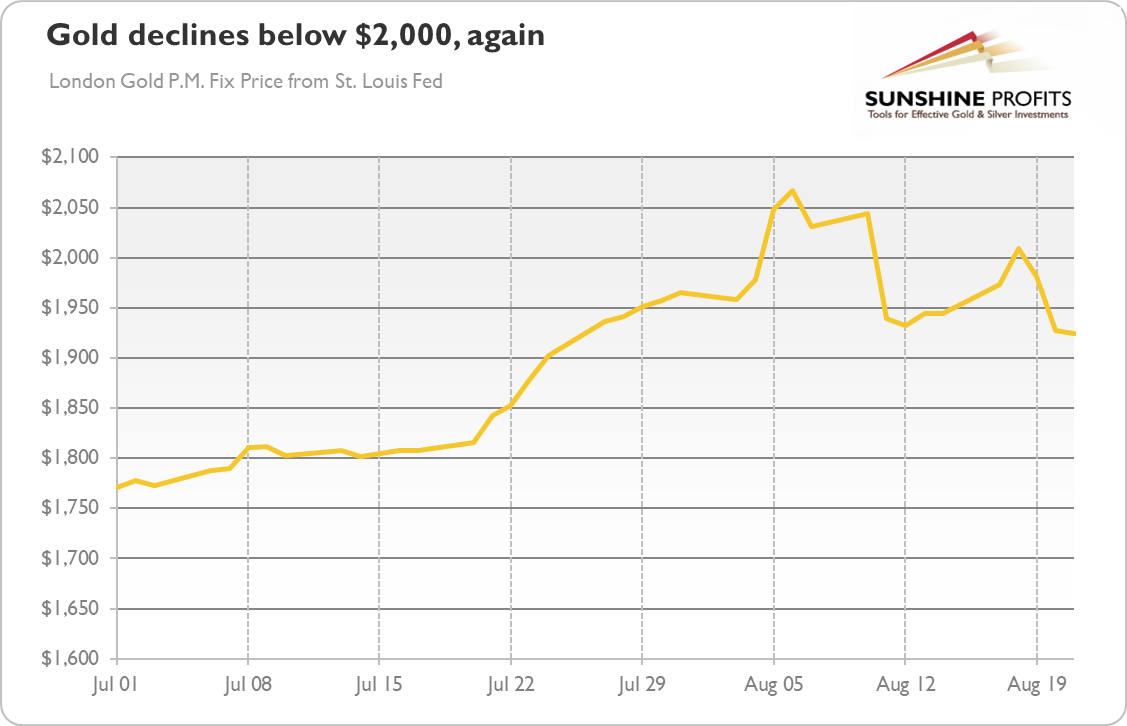 And, perhaps even more importantly, the discussion among the FOMC members shows that they do not want to introduce the yield curve control, at least not now, as costs outweigh benefits:

Of those participants who discussed this option, most judged that yield caps and targets would likely provide only modest benefits in the current environment, as the Committee’s forward guidance regarding the path of the federal funds rate already appeared highly credible and longer-term interest rates were already low. Many of these participants also pointed to potential costs associated with yield caps and targets. Among these costs, participants noted the possibility of an excessively rapid expansion of the balance sheet and difficulties in the design and communication of the conditions under which such a policy would be terminated, especially in conjunction with forward guidance regarding the policy rate. In light of these concerns, many participants judged that yield caps and targets were not warranted in the current environment but should remain an option that the Committee could reassess in the future if circumstances changed markedly.

Hence, the minutes were interpreted as less dovish than expected, so investors sold gold and bought the greenback. The hawkish FOMC minutes coincided with some positive economic reports from the U.S. that also supported the dollar. In particular, the flash U.S. Composite PMI Index jumped from 50.3 in July to 54.7 in August, the highest level since February 2019. Importantly, the service sector recorded the first rise since the start of the year. Meanwhile, the comparable indices for the eurozone came in worse than expected, which helped the U.S. dollar against the euro.

What does it all mean for the gold market? Well, the expressed aversion to the yield curve control is indeed negative for gold prices. Without fresh dovish declarations from the Fed, the market interest rates may increase, creating downward pressure on the gold prices.

However, with or without the yield curve measures, the Fed is even not thinking about thinking about hiking the federal funds rate. So, the fundamentals remain bullish for gold. What we are observing right now, is a much needed consolidation phase. After all, the real interest rates will remain in the low to negative territory for years. The public debt is soaring. The pandemic continues to wreak havoc within the economy. And the FOMC is aware of this. The minutes acknowledges that

the projected rate of recovery in real GDP, and the pace of declines in the unemployment rate, over the second half of this year were expected to be somewhat less robust than in the previous forecast.

through June, only about one-third of the roughly 22 million loss in jobs that occurred over March and April had been offset by subsequent gains

Yup, only about one-third! So, the economy is still far from being normal, and the uncertainty surrounding the economic outlook is elevated. The upcoming presidential election and tensions between the U.S. and China contribute as well.

So, don’t believe that the Fed has become hawkish suddenly and that gold’s bull market has ended. On the contrary, we could see new dovish moves by the U.S. central bank in the future:

Noting the increase in uncertainty about the economic outlook over the intermeeting period, several participants suggested that additional accommodation could be required to promote economic recovery and return inflation to the Committee’s 2 percent objective.

This week is crucial, as the annual Jackson Hole symposium is taking place and Fed Chair Jerome Powell is scheduled to speak on Thursday. If we see a hawkish turn, then, of course, gold may suffer. However, the Fed is likely to remain dovish, and it may even strengthen its dovish stance, which would support gold prices.