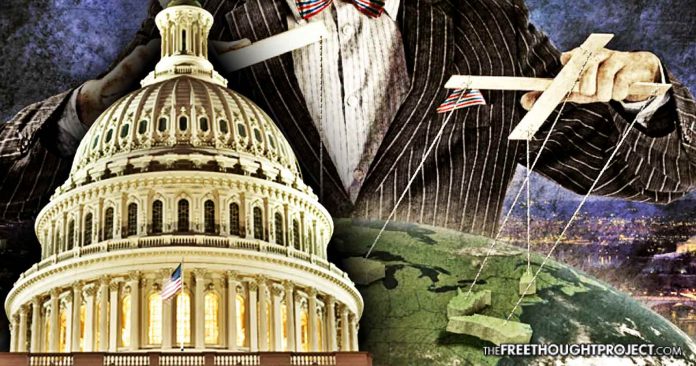 His supporters claim he is as a genius who is playing public policy like 4-D chess. His detractors claim he is a bumbling fool who may also be highly corrupt. To me, his intellect, strategic ability and moral character are still an enigma. However, one thing is clear: his words and actions – whether incidental or deliberate – are shining a bright light on the Deep State.

Citizens of the US have become increasingly suspicious of their government over the past several years. The internet has decentralized the flow of information in such a way that it has become much more difficult for government to control the populace through their carefully crafted narratives. In a new poll conducted by Monmouth University, 74% of the respondents said they now believe the Deep State is manipulating policy.

Ever since the Federal Reserve was created in 1913, powerful interest groups have steadily gained more power within our government. Now it is almost entirely a government that represents the powerful elite instead of the people. Trump’s unusual style of governance may finally be alerting the masses to this travesty.

Consider a statement Trump made a few days ago regarding the situation in Syria:

This directly contradicts the Pentagon’s long-term plans for that region. In fact, the CIA has discussed plans in secret documents (now declassified) that date back to 1986. These plans, of course, are to further control the natural resources of the Middle East.

The Pentagon was unhappy with Trump’s statements, and the leftists immediately accused Trump of purposely ceding the Syrian territory to Russia. Trump was eventually forced to change his mind, and now the plans are to keep troops in Syria indefinitely. However, this was not a complete loss. By having his wishes overridden, Trump showed the world who is really in control.

The POTUS is supposed to be the Commander in Chief, which means he is supposed to have supreme control over the US military. We were instead shown that the power of the Pentagon and the CIA supersedes Trump’s power. This confirms the ominous presence of the Deep State.

Not a good idea to piss off John Brennan. t.co/VLg94OLL2R

Samantha Power and John Brennan went after Trump — in what many would consider a threatening manner — after he fired Andrew McCabe from the FBI. Trump was well within his rights to fire someone he found to be corrupt and a bad fit for the position. However, the Deep State thought differently.

They have been so used to getting their way for so long that they openly threatened to subvert a democratically elected president. To them, maintaining the power of the entrenched elite is more important than the will of the people. Again, this confirmed the public’s suspicion of the Deep State.

Trump should keep following his instincts and loudly speak his mind about various issues. The Deep State has become so bold and eager to maintain power that they will expose themselves by challenging Trump. He is by no means a perfect president, but Trump can do a huge service to this country by exposing the Deep State. Look for more confrontations between Trump and the Deep State to come.