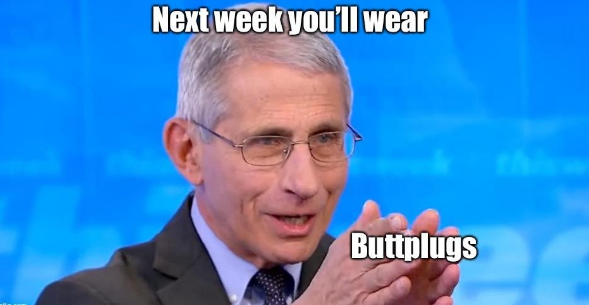 We know as a matter of fact that Anthony Fauci is owned by Bill Gates, who gave him a bunch of grants and put him in prestigious board positions at the Bill and Melinda Gates Foundation. The guy is just a totally spineless shill, who will say whatever he is paid to say.

In an appearance on Dom Lemon’s CNN panic hour, Fauci declared that “When you have such a low level of vaccination super-imposed upon a variant that has a high degree of efficiency of spread (Delta Force Variant), what you are going to see among under-vaccinated regions, states, cities or counties you’re going to see these individual types of blips. It’s almost like it’s going to be two Americas.”

Notice how the leftist media still invite this ZOG bot to their live show to spew his nonsense after all that he has done. The left delusion and habit of covering up for their own monsters is truly incurable.

The thing that still stuns me is how the entire medical community from top to bottom is an accomplice to wholesale clinical fraud.

Half the country is brain dead. Half of the other half have their eyes open but don’t see anything. The remaining quarter is arguing with itself about which knee to bend.

We are finished as a viable society.

Conservatives need to start being willing to die over some issues taking place in this country. Educate, train, prepare, and regain a warrior mentality and warrior spirit to be the best you can at what you do to resist and fight these evil forces all around.

See also  German business confidence is at same levels as when there was full panic during GFC. Will we also see this reflected in stock prices?

Getting back to Fauci, he is preaching now the Delta Force variant, which is so contagious that you must crank the PCR to 50 cycles to find out you have it.

There is no Delta variant, just a different six pair sequence picked up on a PCR test that can’t actually be used for that purpose.

By the way, at 50 cycles a PCR would be a match for anything on the planet. The PCR test cannot distinguish between the flu, the common cold, and supposed Covid. The test can only tell you that there is a genetic marker present that supposedly is a portion of a pathogen.

The problem is that if you amplify any sample with 45 cycles on a PCR test, it will show a positive for anything you are trying to match, because the background genetic information is brought to the foreground.

If you run a blank piece of paper through a photocopier 1000 times, the entire sheet will be black, because the machine will amplify the noise until it fills the page.

I bet if you PCR tested a spike protein from the Pfizer jab, it would be a 100% match for the Delta variant.

People do know that the Covid test looks for the DNA marker of the spike protein that is supposed to be used by SARS-CoV-2 to latch onto cells. The same spike protein the jabs cause your cells to produce.

See also  There are two reasons why the Biden administration is going all-in on Russia and China with rapid escalation...

Never underestimate the stupidity of a lab technician. For every intelligent one, there are 100 morons that can’t even read a clear blue easy pregnancy test.

Speaking of 600,000 “covid deaths”, you might want to check the CDC database where they say at least 95% of Covid deaths were falsely attributed to the virus. When the stage four cancer patient is given three weeks to live, got a PCR positive test and died, they didn’t die of covid.

Also, asymptomatic spread of a respiratory virus is nearly impossible. You are talking of a likelihood of .0001%. You simply cannot generate enough replicated virus to infect someone, if you aren’t replicating virus. It is absolutely known science.

Basically, we’d just better hope that this entire Beast system comes crashing down, because things are about to get really weird.