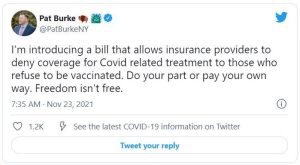 Member of the New York State Assembly Pat Burke (Democrat, of course), believes that unvaccinated Americans refusing the experimental COVID-19 vaccine should be denied healthcare. This is the same man who once claimed healthcare was a human right. “Freedom isn’t free,” he had the audacity to tweet. I was under the impression that my tax dollars paid for Operation Warp Speed, vaccinations, and government handouts. The Constitution was formed on the grounds that America would be the land of the free. Pompous lawmakers now want to remove all of our freedoms and are no longer sugar-coating their agenda.

After facing backlash on Twitter, Burke said, “Let me know when smoking and obesity become highly contagious diseases that disrupt every facet of life, overwhelm hospitals, and cost the government trillions of dollars.” Well, those conditions do overwhelm hospitals. In fact, obesity is the number one comorbidity for COVID-19.

See also  The Left Was Paranoid That Trump Would Start WW3 When In Office. Now, Biden Is Actually Launching WW3 And The Left Is Cheering It On

Here is a video of Burke explaining why Americans who don’t play by the rules should die. When questioned about the social media backlash, Burke claimed most of his critics were posting from fake accounts. In the same breath, Burke claims he supports universal healthcare. “Do your part,” he repeatedly states. What exactly does that entail? Vaccinated individuals can still pass along the virus. The vaccine has proven adverse side effects, and the long-term consequences are unknown. Newsflash: taking the vaccine does not mean you are saving the world. Lawmakers see the pushback from skeptical citizens, and in response, expect the penalties to become harsher. Hold the line.

See also  "You would have a far-Right government in every country in Europe"
Trending: Views: 14