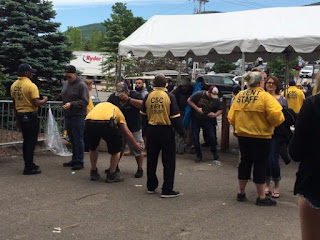 A recent Appeals Court ruling in Tennessee reveals a disturbing window into how police use concerts, music festivals and sporting events to trample our Fourth Amendment rights.

When Brian Wiley purchased tickets to the Bonnaaroo Music Festival in 2016 he never thought that police would be allowed to search his car without probable cause.

Yet that is exactly what happened.

The Bonnaroo Music Festival is a four-day music festival that provides overnight camping to concertgoers with the added bonus of being searched free of charge.

According to Coffee County Sheriff’s investigator James Sherrill, Mr. Wiley should have known that concertgoers and campers would be searched the moment they stepped foot onto the festivals grounds.

The police argued that Mr. Wiley’s music festival ticket gives police permission to search everyone, including their vehicles.

The terms of admission printed on the back of the ticket in fine print are,

“This ticket is a revocable license for the time listed on the front hereof. Management reserves the right, without refund of any portion of the ticket purchase price, to refuse admission or eject any person who fails to comply with the rules of the venue, local, state, or federal law, or whose conduct is deemed illegal, disorderly, or offensive by management. Persons entering the  facility are subject to search for contraband, alcohol,controlled substances, weapons, firearms,fireworks, cameras, video equipment or recording devices, which are expressly forbidden and subject to confiscation.”

One would think that refusing to allow police to search their person or vehicle would lead to immediate ejection right?

I mean after all that is what it says: “Management reserves the right, without refund of any portion of the ticket purchase price, to refuse admission or eject any person who fails to comply with the rules of the venue, local, state, or federal law.”

But alas, all is not what is seems in the land of the free.

Even though Mr. Wiley purchased a separate car camping pass for $59.75 that allowed him to park overnight away from the music festival, he was still expected to forgo his rights and let the police search his vehicle.

But you say, he’s probably a drug dealer and the end justifies the means, right? Well how do police justify this?

“She (his sister) relayed that the officers informed them of the information they had received from Mr. Watson (the accuser) and that the officers made a lot of threatening remarks about removing [their] wristbands and kicking [them] out of the Festival.”

Police threatened to kick them out of the music festival but instead they took Mr. Wiley’s car keys without his permission.

According to the police officers own testimony, they took Mr. Wiley’s keys and searched his car without a warrant.

Investigator Sherrill could not remember taking the keys from Mr. Wiley but he remembered everything else? I’m not buying it and neither should you.

In what era is it OK for a cop to take someone’s keys out of their hands to justify an illegal search? Especially when the police admitted they did not see either of them commit any crimes?

“At 9:35 p.m., Investigator Sherrill encountered the Defendant at his campsite. Neither the Defendant nor any of the other campers present at the campsite were doing anything illegal at that time.”

Do we give up all of our rights simply because cops suspect someone of committing a crime?

The Appeals Court ruling allows law enforcement to search and seize anyone’s vehicle simply because they purchased a ticket to a music festival or sporting event.

“The Court of Appeals determined that the search of the Defendant’s automobile fell within the automobile exception to the warrant requirement. The officer may seize the automobile and obtain a search warrant or instead may search the automobile immediately.”

The Appeals Court also ruled music festival/sportsgoers have no right to privacy.

“The Defendant clearly had no expectation of privacy upon entering the Festival. The terms of admittance to the Festival as set forth on his ticket make clear that he is subject to search for controlled substances. The Defendant purchased a license to camp, which did not afford him rights equivalent to that of a homeowner, lessee or occupant of a hotel room.”

What if music festivals, concerts and sporting events included on the back of tickets being subjected to body-cavity searches, electronic device searches like your cellphone, tablet, laptop, vehicle’s infotainment center, your E-ZPass records and your vehicle’s black box data ? Would Americans be OK with that?

No one should expect that their rights can be taken away just because they purchased an event ticket.