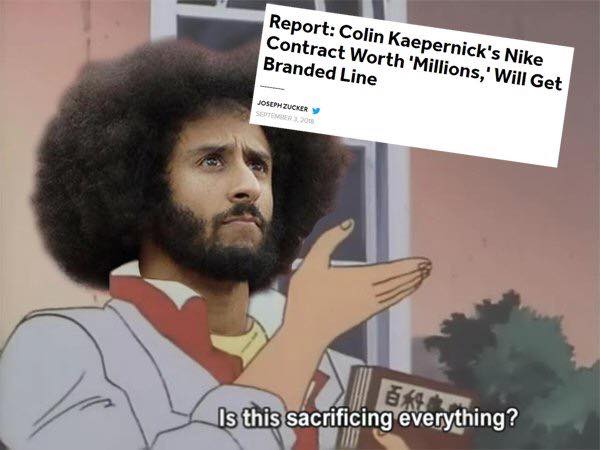 In the aftermath of Nike choosing NFL washout Colin Kaepernick to be the image of their brand, with the latter signing a huge deal (millions of dollars) in regard to the 30th  anniversary of Nike’s famous “Just Do It” slogan, a national scandal fueled by social media followed by calls to boycott ,with former fans of the brand setting Nike apparel on fire in a political statement of sorts occurred. Obviously, every red-blooded American was expecting for the Donald to weigh in on the “extravaganza” on Twitter, as usual, but truth be told, he was unexpectedly quiet. However, that changed, as the POTUS gave an interview for the Daily Caller on Tuesday afternoon. If you don’t know about the Nike-Colin Kaepernick scandal, just go read this piece I wrote earlier: The Whole Nike Kaepernick Extravaganza is Stupid.

Now, moving along with the Donald story, here’s what he told the Daily Caller:

The part about Nike paying a lot of rent refers to Niketown New York, which is owned by the former real estate mogul, currently the President of the US. Trump is absolutely correct. It’s a bad decision, message-wise, and financially (as Nike will soon see), but in terms of freedom, capitalism and democracy, it’s Nike’s right to do what they will and send whatever message they choose and hire whomever they decide is best for them. It’s called freedom. And consumers have the freedom to not buy into any of that, and close their wallets to Nike. Nike is a business whose real target market is the under 25 demographic, which typically is either apolitical or liberal – especially in urban markets. To Nike’s credit, they’ve established a cache in this market segment that allows them to make spectacular margins on a consumer product. Personally I think Kapernick is an idiot and I wouldn’t buy Nike unless it was the best deal for my money – but I am a businessman and I respect a profitable business model. And as far as being a patriotic American, it goes a lot deeper than what kind of shoes you wear or motorcycle you ride.

See also  Kellyanne Conway: President Biden, I'm not resigning, but you should.

Here’s my take on Trump’s unusually polite and diplomatic answer  on the whole Nike-Kaepernick thing: this is an extension of the battle for black voters. Trump has made some inroads with the black community, and the left is nearly in a panic. Nike suspected that Trump would rail against them, and in the process alienate a large section of black voters.

Trump has to criticize it without criticizing it. He just did that, and can now turn this against Nike. Watch for that in the near future.

At the end of the day, we all work for money. From Colin to Bob Woodward… everyone is cashing in on Trump, one way or another. If Trump wants to end the debate right now and force Kaepernick into oblivion, he should just talk about how he completely agrees with him and considers him a close friend. The left would completely short circuit.