Imagine the richest 1% of wage earners in your state all got together at the same stadium to watch a football game. How much money would you need to earn each year to get into the game? And what would be the average income level of everyone in attendance? Our newest visualization breaks down both components of that hypothetical situation for every state in the country. 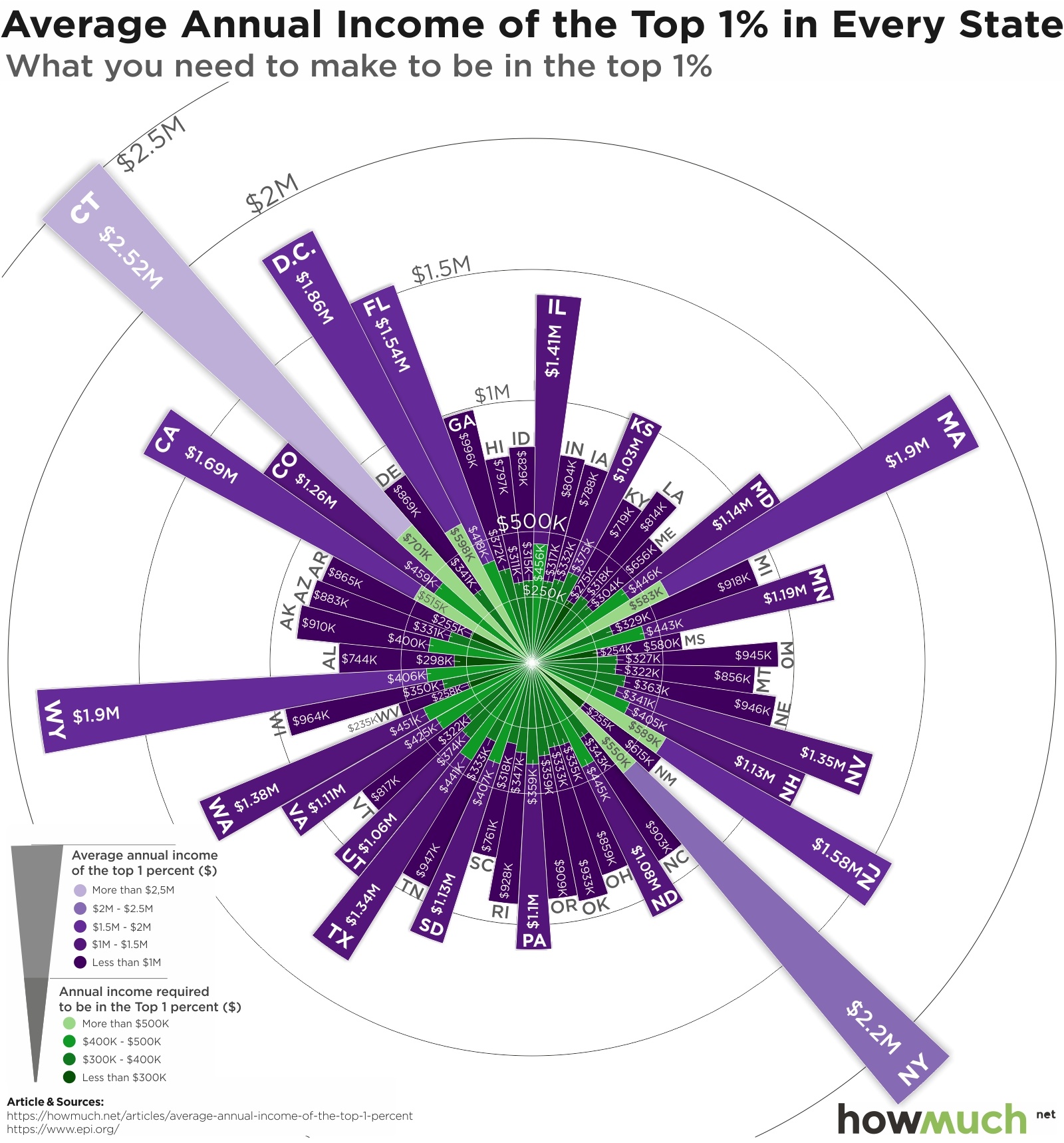 We found our data at the Economic Policy Institute (EPI), which published a detailed studylast month on income levels based on 2015 tax filings for both single adults and married couples. The EPI found both how much income is needed to count yourself in the top 1% of earners in each state (the green in our visual). They also calculated the average annual income for that specific group of people (the purple in our visual). In other words, our visualization represents both the minimum amount needed to be counted as an elite one-percenter, and the average amount for that cohort. This methodology reveals a startling level of inequality even among the richest Americans.

Here are the ten states where the top 1% of wage earners have the highest incomes on average:

There’s a lot that can be said about our visualization. Most obviously, the purple pieces of our exploding pie chart are almost always significantly larger than the green parts. Think about it this way: if you live in Connecticut, you need to make $700,800 a year just to be counted among the top 1%. But the average income for one-percenters is $1.8M higher, at $2,522,806. In fact, the average difference between these two numbers for every state is an eye-popping $715,482. And a lot of people no doubt earn significantly more than that.

Another way to think about the visualization is by looking at the states with the lowest gaps, that is, the least amount of separation between the richest of the rich and those who are just plain rich. These states all tend to be rural and grouped in the South, like West Virginia, Mississippi, New Mexico, Maine and Kentucky. These are places where you don’t need to crack $1 million to make it into the top 1%, and in West Virginia for example, you only need to make $258,028. And of course several states stand out as places with extremely high average annual incomes at the very top of the totem pole. Connecticut, New York, Massachusetts and New Jersey no doubt have lots of wealthy folks thanks to Wall Street. Washington DC apparently has an elite group of lobbyists pulling down well over half a million, and California mints its one-percenters in Silicon Valley. Nobody’s surprised anymore to see absurdly high inequality in these places.

See also  Every woman in America needs to listen to these doctors speak! (Video)

But take a look at Wyoming, where the average income of the top 1% is an incredible $1,900,659. The EPI actually singles out Jackson, WY as the most unequal location in the entire country. Speaking of which, guess where the Federal Reserve just held its annualeconomic symposium? That’s right, Jackson Hole, WY. Coincidence, anyone?