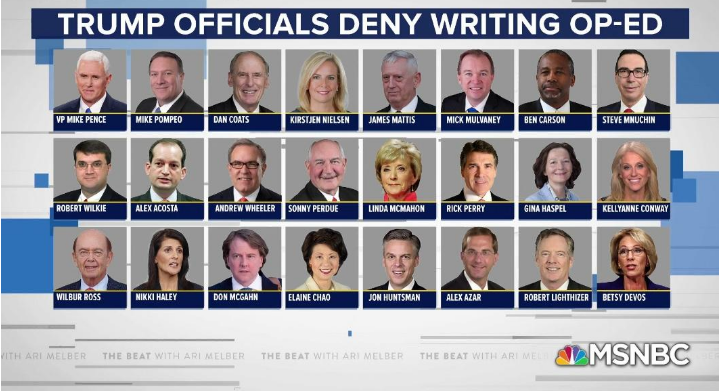 The degeneracy of mainstream media has been immense. Nowhere has that been so evident than at the New York Times. You may remember that about a month ago, the NYT hired an overt racist by the name of Sarah Jeong. If that didn’t damage their credibility enough, this month, they published an anonymous opinion piece that supposedly detailed the innerworkings of the Trump administration.

But the piece went further than that. The author claimed to be resisting Trump while deeply imbedded within his administration, a senior official. This, of course, evoked strong emotions from the millions of resisters that want Trump impeached. To them, it was further evidence of his corruption and incompetence.

However, the article wasn’t earth-shattering at all. It told The Resistance what they wanted to hear, or what they already thought they knew. So, why publish it at all? First, let me say that this article could be a complete fabrication, but let’s assume it’s real.

Let’s start by analyzing some quotes from the article.

“The root of the problem is the president’s amorality. Anyone who works with him knows he is not moored to any discernible first principles that guide his decision making.”

The author of the article makes a point about Trump’s amorality. It’s laughable because politicians are known to be amoral. I wrote an article about this last week. Amorality or, even immorality, is how politicians gain and maintain power. It is just part of the dirty, dirty job, so why expect Trump to be different?

“Although he was elected as a Republican, the president shows little affinity for ideals long espoused by conservatives: free minds, free markets and free people. At best, he has invoked these ideals in scripted settings. At worst, he has attacked them outright.”

Okay, this should set off your BS alarm immediately. Free markets? When is the last time a conservative administration cared about free markets? They are all lackeys for the central banking system that centrally plans economic outcomes. Free people? Not when Bush implemented the surveillance state. Free minds? I don’t even know what the author is getting at here.

“In addition to his mass-marketing of the notion that the press is the “enemy of the people,” President Trump’s impulses are generally anti-trade and anti-democratic.”

The corporate press sure acts like the enemy of the people, the way they divide us up like chattel. I went over the media’s perniciousness here. Anti-trade? Sure, Trump has been worse on that. Anti-democratic? The author is the one apparently trying to undermine his democratic election.

“Don’t get me wrong. There are bright spots that the near-ceaseless negative coverage of the administration fails to capture: effective deregulation, historic tax reform, a more robust military and more.”

“Meetings with him veer off topic and off the rails, he engages in repetitive rants, and his impulsiveness results in half-baked, ill-informed and occasionally reckless decisions that have to be walked back.”

Good thing presidents aren’t as powerful as everyone thinks they are. Trump spends most of his time traveling, doing speeches and other ceremonial-type events. Does anyone really expect him to be a genius strategist?

“In public and in private, President Trump shows a preference for autocrats and dictators, such as President Vladimir Putin of Russia and North Korea’s leader, Kim Jong-un, and displays little genuine appreciation for the ties that bind us to allied, like-minded nations.”

This statement is utterly absurd. The US has always been friendly with dictators. Maybe our closest ally, Saudi Arabia, has one of the worst human rights records in the world. The US provides military assistance to 73% of the world’s dictators, and that didn’t start under Trump.

“On Russia, for instance, the president was reluctant to expel so many of Mr. Putin’s spies as punishment for the poisoning of a former Russian spy in Britain. He complained for weeks about senior staff members letting him get boxed into further confrontation with Russia, and he expressed frustration that the United States continued to impose sanctions on the country for its malign behavior. But his national security team knew better — such actions had to be taken, to hold Moscow accountable.”

These chicken hawks are desperately pushing for war with Russia.

Hahahaha. This is just too much.

The article finished up by kissing John McCain’s ass one more time. As anyone who is interested in the truth can see, this is shameless propaganda. I’ve been writing about these sorts of narratives for a while now, how they will make Trump the scapegoat to cover up their colossal failures. I just never assumed they would stoop this low. I guess it shouldn’t surprise me though.

See also  Look at this propaganda crap aimed at kids from the WaPo...
See also  Evergrande- Why Most Analysis Is Dead In The Water
2,475 views