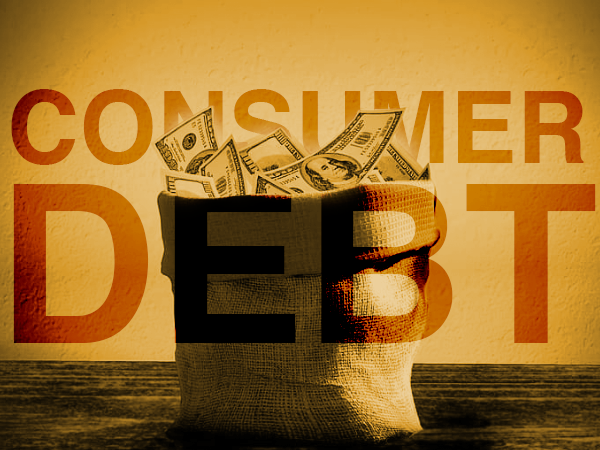 You can see how total outstanding consumer debt, currently at $4.2 trillion, has skyrocketed since 2008 in the graph below:

But the total amount of outstanding debt isn’t the only problem, because as reported by Newsmax, consumer borrowing in December also shot up the most in five months:

Total credit climbed by $22.1 billion from the prior month, exceeding all economist estimates in Bloomberg’s survey, after a downwardly revised $11.8 billion gain in the prior month.

The graph below shows the change in consumer credit for the past 25 years. What’s particularly interesting to note is that monthly increases in consumer borrowing have pretty much stayed above the $10 billion mark (and mostly above $20 billion) since 2013.

That high rate of increased consumer borrowing came at a time when the Dow doubled from 14,000 to over 29,000 today.

The eerie problem with economic growth fueled by consumer debt

Consumer spending represents about 70% of all economic growth, so if most of that spending is fueled by debt, then there could be a bursting debt bubble on the horizon when the bill comes due. Especially if consumers can’t afford to pay their bills.

“The rebound in credit suggests consumers needed more than just wage gains and cheaper fuel to drive fourth-quarter growth,” according to Newsmax. If that’s true, it seems like consumers already are having trouble paying the bill with earned wages.

The proof is in the pudding, with official inflation at 2.5% (including food and energy) and still rising, and personal income stagnating since 2013. If rising inflation and stagnating wages continue, consumers will have difficulty repaying their debts.

And keep in mind, the Federal Reserve report on consumer borrowing doesn’t factor in mortgage debt or loans backed by real estate.

So if the “record economic expansion” is mainly fueled by consumer debt, and something else happens so consumers can’t pay back that debt, then credit defaults will likely increase.

With too many defaults, you could have a debt bubble burst similar to the one that caused the last recession. Except with $4.2 trillion in debt outstanding, the weight on the economy would be unprecedented.

Shield your retirement from a potential debt bubble explosion

The debt that is fueling the “record” growth in the U.S. could quickly become a lead weight that could sink the economy. All it would take is for one thing to go wrong.

Which is why now is an ideal time to consider shielding your retirement from market cheerleaders who think “more debt is better” without considering the consequences of mindless growth.

So while you examine your portfolio for opportunities to diversify your assets and reduce your risk exposure, consider moving some of your funds into precious metals such as gold and silver.