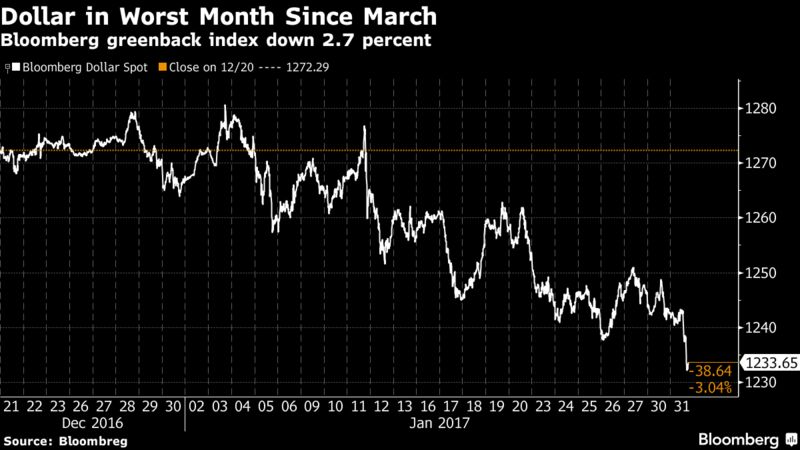 The recent events taking place foreshadow a U.S. dollar collapse. Deteriorating relations with China could suggest worsening trade dynamics going forward, but in reality, this risk is substitutable with all big U.S. trading partners. It doesn’t matter if this happens through border taxes or import tariffs, withdrawing from the WTO or involving itself in war as all these events lead to the same place for the U.S. dollar.
The dollar seems to enjoy a lot of momentum after the election. Renewed growth prospects originating from new administration policies and higher interest rate expectations have provided a constant bid, lifting the U.S. Dollar Index to 14-year highs in early January. So why is the liberal international exchange of goods so paramount to the health of the U.S. dollar? One reason has to do with foreign demand of U.S. dollars. When the U.S. exports goods, this creates demand for the dollar since foreign buyers must pay in U.S. dollars to obtain these goods. Foreign entities then convert their own currencies to U.S. dollars to complete this, increasing demand for the greenback. It’s the basic concept of supply and demand written about by Adam Smith in his 1776 book, The Wealth of Nations.
“While it’s hard to give a definitive timeline, the best strategy to protect against the economic consequences of a dollar collapse lies with diversifying your portfolio in negative correlating assets. Gold is one such asset, historically buffering currencies against falling values in local dollar terms. There are literally thousands of examples one could choose from, but we’ll highlight the recent performance of gold prices in British pounds as one such example. As of this writing, one ounce of gold cost £980.10 to purchase, up from £956.00 or 2.48% post-Brexit. Meanwhile, the GDP/USD pair has fallen roughly eight percent during that time. Put another way, had a Brit sold all their pounds for gold the day after the Brexit vote, they would be roughly 10.5% richer than by doing nothing at all. Protecting wealth is what gold does, and will forever do. Fortunately, the question of how to protect yourself from a dollar collapse is a straightforward one. If the proper risk management principles are used, it’s possible to preserve wealth and thrive in these unprecedented times ahead.” Benjamin A. Smith
In short, a U.S. dollar collapse 2017 could be imminent, depending on the agenda to be set for free trade policy by Donald J. Trump.