The Iconic Image of the Global Warming Movement Is a Fraud

Global warming alarmist Dr. Michael Mann of Penn State University has lost his multimillion dollar libel suit in British Columbia. Not only did he lose, the suit was thrown out and Mann was ordered to pay defendant Dr. Tim Ball’s legal costs. The judge threw out the case “with prejudice” meaning Mann cannot not refile it. Details here.

This is a huge victory for honesty and ethics in science.

Unfortunately, it is highly unlikely the MSM will cover Dr. Mann’s loss in court and its implications for the global warming movement. So, I have put together this background posting to explain what this means. It will be the lead story on the blog the rest of today and Monday.

Dr. Ball was sued because he said, of Dr. Mann’s seminal “hockey stick” work, “he belongs in the state pen, not Penn State.” While others came to the same conclusion about the hockey stick, Mann sued Ball for libel. After eight years, Mann refused to provide a single document under the court-ordered discovery. It is now reasonable to conclude “the hockey stick” (HS) was a fraud. This is vitally important because it was the HS that directly led to the Nobel Prize for Al Gore and United Nations’ Intergovernmental Panel on Climate Change (IPCC). One of the major tenets of the catastrophic global movement has been falsified.

Here is the backstory…

In 1999, the world was stunned when the United Nations’ Intergovernmental Panel on Climate Change published on the cover of its then-latest report the illustration below. It came to be

known as “the hockey stick.” It was a breathtaking piece of science: it showed there was no Medieval Warm Period (~900-1300 AD) and that contemporary temperatures are far higher than anything mankind has previously experienced.

The hockey stick was featured in just about every newspaper, on every newscast, in Al Gore’s An Inconvenient Truth, and throughout the scientific community.

It was almost certainly a fraud.

And, it was scientifically wrong in two ways:

1) The temperature reconstruction for the period from 1000 AD to about 1890 AD was based on tree bark from a number of bristlecone pines that, according to Mann, accurately reflected the temperatures experienced by the tree (a questionable assumption but I will not go into that here). But, there was a huge problem: the bristlecones showed world temperatures declining in the 20th Century!

As Steve McIntyre tirelessly labored to demonstrate (and, he is the person that deserves a Nobel Prize!), Mann’s (and Keith Briffa’s) data showed temperatures declining in the 20th Century.

Of course, we had thermometers in the 20th Century and it wouldn’t do for the bristlecone data’s (BD) credibility to show falling temperatures during the period when global warming activists wanted to show a rapid rise. So, Mann used a “trick” where he decided to “hide the [bristlecone data] decline.” He did so by splicing the contemporary thermometer data onto the bristlecone data and deleting the BD after the vertex. Below is one of the key Climategate emails. “Nature” refers to Mann’s paper published in Nature.

From Mcintyre, here is a reconstruction of all of the pertinent data. The BD is pink. Mann deleted the bristlecone data around 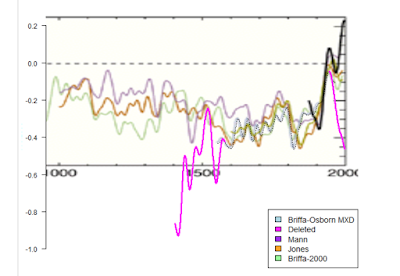 2) When one fed even random data into Mann’s Excel program:
…a couple of Canadian researchers, McIntyre and McKitrick, found that when they ran simulations of “red noise” random principal components data into Mann’s reconstruction model, 99% of the time it produced the same hockey stick pattern.

Not only did Mann create this scientific fraud, Climategate revealed him conspiring with Britain’s Dr. Phil Jones to reject meritorious papers that cast doubt on catastrophic global warming so as to keep those papers out of the scientific journals. A quote from the Climategate emails:

We “will keep them [papers with differing conclusions] out somehow — even if we have to redefine what the peer-review literature is!”

Which is why global warming alarmists always ask the question, “Has [whomever] published in the peer-reviewed climate journals?” They know they have gamed the process and it is highly unlikely radically opposing viewpoints will be published. Renowned climate scientist, Dr. Judith Curry, recently had a paper rejected. One of the reviewers wrote:

“Overall, there is the danger that the paper is used by unscrupulous people to create confusion or to discredit climate or sea-level science. Hence, I suggest that the author reconsiders the essence of its contribution to the scientific debate on climate and sea-level science.”

Please note: the above rejection had nothing to do with the scientific merit of the paper. It had to do with — gasp — casting doubt on the “consensus.” Remember: The huge monies that flow into climate study only continue to flow if there is a real or manufactured catastrophe.

So, where are we?

The hockey stick was the major piece of evidence that current temperatures are unprecedented in human history. They likely are not. Temperatures today appear to be similar during the Medieval Warm Period. Earth’s temperatures were even warmer during the Roman Optimum (when Jesus walked the earth).

Because those periods were equal to or warmer than today, it calls into question just how much of today’s warming is due to CO2 emissions. Mother Nature is apparently able to create current temperature levels on her own.

ADDITION #1, 1:50p Sunday:
To clarify the Medieval Warm Period (MWP) issue, here are the two versions of the climate history of the last thousand years. 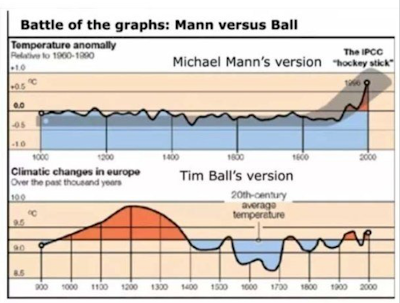 Until the hockey stick, the MWP was generally accepted science. The HS is wrong not only because of it eliminating the warm period, it also does not show the Little Ice Age which obviously occurred. As one climate scientist was quoted as saying, “We have to get rid of the Medieval Warm Period.” The HS certainly accomplished that goal.

Climate Crazies Now Want You To Feel Guilty About Your Vacation.

The scolds who buy into the notion that we’re all killing dear old Mother Earth have a seemingly endless list of joys they want to remove from our lives, and have now set their sights on one of the greatest: your annual vacation.

The New York Times has an opinion piece this weekend titled “How Guilty Should You Feel About Your Vacation?” The article was written by a travel writer named Seth Kugel.

I’ve often wondered how it would feel to work in an industry blamed for its outsize impact on global warming — say, oil drilling or cattle ranching. But it recently struck me that the question is not hypothetical. I’m a travel writer.

Yes, I’ve long known that jet fuel emits a ghastly amount of greenhouse gases, but I pinned that on the fossil fuel and aviation industries. Now the flight shaming movement, which emerged recently in Sweden and spread into Europe, has attempted to shift blame onto travelers.

The “flight shaming movement” mentioned has been championed by that teenage brat who got a week’s worth of publicity by refusing to meet with President Trump, even though no such meeting was ever discussed.

Harvard Climate Loon: Keto Dieters Are Killing the Planet Because Bacon and Butter or Something

Those of us not members of the climate hysteria cult have long marveled at the disconnect exhibited by those who are as they wag their fingers at us from private jets and commercial airliners. It’s nice to see that they are at least beginning to realize that they are full of it.

The problem, of course, is that they want everyone to feel bad about it. As I have written on many occasions, leftists are inherently miserable, and their mission is to make sure everyone joins in that misery.

I have been self-employed almost my entire adult life, so I barely know what a vacation is. I have, however, had the great fortune to fly all over the world doing stand-up, which wouldn’t have been possible without those glorious, greenhouse gas-belching jet engines getting me there.

I have seen the vision of the future that the climate crazies have for us, and it mostly involves abandoning almost every modern convenience you love.