From Bloomberg:
Billionaire investor Paul Tudor Jones has a message for Janet Yellen and investors: Be very afraid.
The legendary macro trader says that years of low interest rates have bloated stock valuations to a level not seen since 2000, right before the Nasdaq tumbled 75% over two-plus years. That measure — the value of the stock market relative to the size of the economy — should be “terrifying” to a central banker, Jones said earlier this month at a closed-door Goldman Sachs Asset Management conference, according to people who heard him.
Jones is voicing what many hedge fund and other money managers are privately warning investors: Stocks are trading at unsustainable levels. A few traders are more explicit, predicting a sizable market tumble by the end of the year.
Last week, Guggenheim Partner’s Scott Minerd said he expected a “significant correction” this summer or early fall. Philip Yang, a macro manager who has run Willowbridge Associates since 1988, sees a stock plunge of between 20 and 40 percent, according to people familiar with his thinking.
Even Larry Fink, whose BlackRock Inc. oversees $5.4 trillion mostly betting on rising markets, acknowledged this week that stocks could fall between 5 and 10 percent if corporate earnings disappoint.

Their views aren’t widespread. They’ve seen the carnage suffered by a few money managers who have been waving caution flags for awhile now, as the eight-year equity rally marched on.
But the nervousness feels a bit more urgent now. U.S. stocks sit at all-time highs. The S&P 500 index is trading at about 22 times earnings, the highest multiple in almost a decade, goosed by a post-election surge.
Managers expecting the worst each have a pet harbinger of doom. Seth Klarman, who runs the $30 billion Baupost Group, told investors in a letter last week that corporate insiders have been heavy sellers of their company shares. To him, that’s “a sign that those who know their companies the best believe valuations have become full or excessive.” 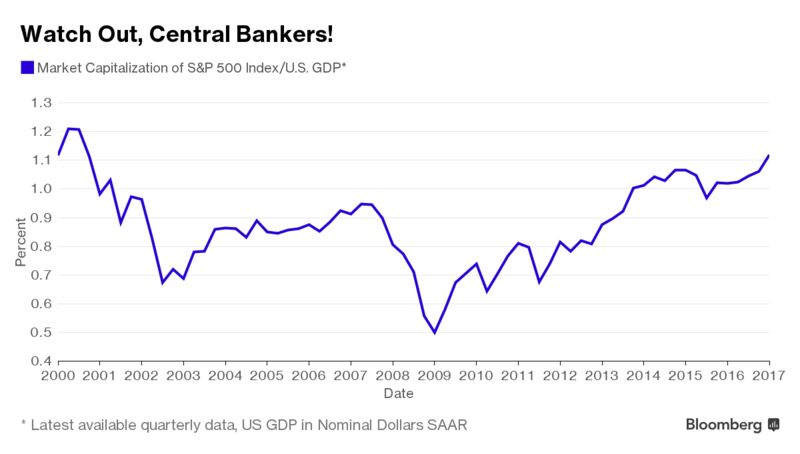 Share sales by insiders outstripped purchases by $38 billion in the first quarter, the most since 2013, according to The Washington Service, a provider of data and analysis on insider trading.
Klarman also noted that margin debt — the money clients borrow from their brokers to purchase shares — hit a record $528 billion in February, a signal to some that enthusiasm for stocks may be overheating. Baupost was a small net seller in the first quarter, according to the letter.
Another multi-billion-dollar hedge fund manager, who asked not to be named, said that rising interest rates in the U.S. mean fewer companies will be able to borrow money to pay dividends and buy back shares. About 30% of the jump in the S&P 500 between the third quarter of 2009 and the end of last year was fueled by buybacks, according to data compiled by Bloomberg Intelligence. The manager says he has been shorting the market, expecting as much as a 10% correction in U.S. equities this year.

Other worried investors, like Guggenheim’s Minerd, cite as potential triggers President Donald Trump’s struggle to enact policies, including a tax overhaul, as well as geopolitical risks.
Yang’s prediction of a dive rests on things like a severe slowdown in China or a greater-than-expected rise in inflation that could lead to bigger rate hikes, people said. Yang didn’t return calls and emails seeking a comment.
Even billionaire Leon Cooperman — long a stock bull — wrote to investors in his Omega Advisors that he thinks U.S. shares might stand still until August or September, in part because of flagging confidence in the so-called Trump reflation trade. But, they’ll eventually resume their climb and end the year moderately higher, he and vice chairman Steven Einhorn wrote in the letter.
When asked Friday about Jones’s comments, Fed Vice Chairman Stanley Fischer told CNBC, “There are lots of things that terrify me — stock market volatility of the magnitude that we’ve seen for the last couple of years doesn’t,” without addressing valuations. “Of course we’ll watch very closely and if we see excess volatility, wonder what is behind it and whether there are structural features that need fixing or whether it’s simply recent events or even policy actions.”

While Jones, who runs the $10 billion Tudor Investment hedge fund, is spooked, he says it’s not quite time to short. He predicts that the Nasdaq, which has already rallied almost 10% this year, could edge higher if nationalist candidate Marine Le Pen loses France’s presidential election next month as expected. Jones tripled his money in 1987 in large part by correctly calling that October’s market crash.
While the billionaire didn’t say when a market turn might come, or what the magnitude of the fall might be, he did pinpoint a likely culprit.
Just as portfolio insurance caused the 1987 rout, he says, the new danger zone is the half-trillion dollars in risk parity funds. These funds aim to systematically spread risk equally across different asset classes by putting more money in lower volatility securities and less in those whose prices move more dramatically.
Because risk-parity funds have been scooping up equities of late as volatility hit historic lows, some market participants, Jones included, believe they’ll be forced to dump them quickly in a stock tumble, exacerbating any decline.
“Risk parity,” Jones told the Goldman audience, “will be the hammer on the downside.”