by Umar Farooq
There is a talk at the FED about the unwinding of its grand monetary policy experiment. The knock-on effects of this experiment in the bond market could pose a threat to the U.S. housing recovery.
A number of Fed officials just recently have openly discussed the need for the central bank to reduce its bond holdings, which it purchased as part of its extraordinary quantitative easing during and after the financial crisis. The talk has prompted some on Wall Street to suggest the Fed will start its drawdown as soon as this year, which has refocused attention on its $1.75 trillion reserve of mortgage-backed securities. 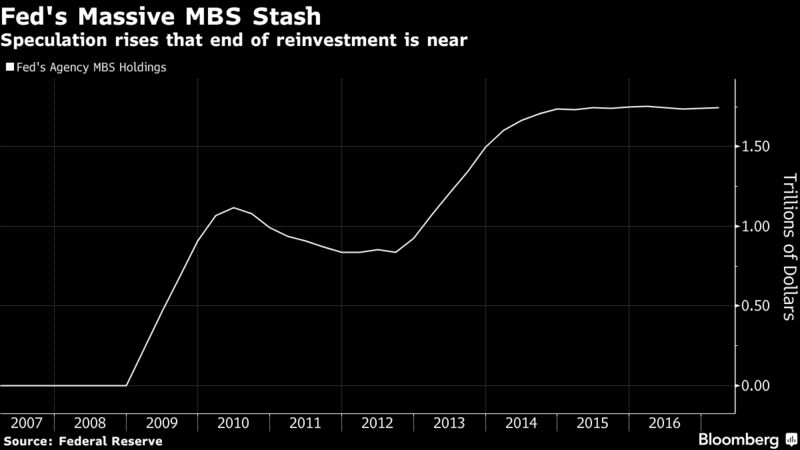 Some lawmakers have criticized the FED’s holding of MBS in the past citing it as beyond what is needed to achieve the FED’s mandate. Although the Fed also owns Treasuries as part of its $4.45 trillion of assets, but its MBS holdings are considered as a bone of contention by the lawmakers. Since the Fed is now the biggest source of demand for U.S. government-backed mortgage debt and owns a third of the market, any move is likely to increase costs for home buyers. 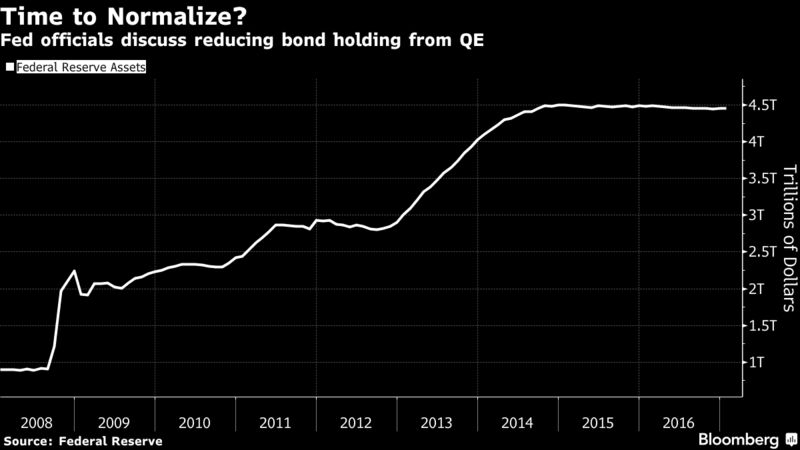 Unwinding QE “will be a massive and long-lasting hit” for the mortgage market, said Michael Cloherty, the head of U.S. interest-rate strategy at RBC Capital Markets. He expects the Fed to start paring its investments in the fourth quarter and ultimately dispose of all its MBS holdings.
In a roughly two-year span that ended in 2014, the Fed increased its MBS holdings by about $1 trillion, which it has maintained by reinvesting its maturing debt. Since then, 30-year bonds composed of Fannie Mae-backed mortgages have only been about a percentage point higher than the average yield for five- and 10-year Treasuries, data compiled by Bloomberg show. That’s less than the spread during housing boom in 2005 and 2006.
Talk of the Fed pulling back from the market has bond dealers anticipating that spreads will widen. Goldman Sachs Group Inc. sees the gap increasing 0.1 percentage point this year, while strategists from JPMorgan Chase & Co. say that once the Fed actually starts to slow its MBS reinvestments, the spread would widen at least 0.2 to 0.25 percentage points.
“The biggest buyer is leaving the market, so there will be less demand for MBS,” said Marty Young, fixed-income analyst at Goldman Sachs. The firm forecasts the central bank will start reducing its holdings in 2018. That’s in line with a majority of bond dealers in the New York Fed’s December survey.
Bottomline is that the FED’s quantitative easing move will have repercussions for the US housing market and the consequences of this can’t be ignored.

See also  Why (and How) the Fed Could Incinerate Your Savings in One Month
See also  The State of the Foreclosure Market - Banks Are Not Taking Houses Back
Trending: Views: 0