What, if anything do the Republican and Democratic Party ticket logos tell us about the candidates?  Below are the Trump – Pence logo and the Clinton – Kaine logo. 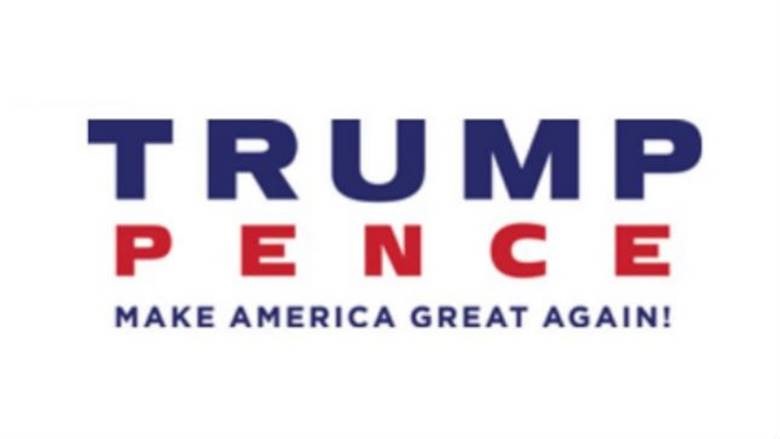 First, let’s consider the Trump – Pence logo.  The logo has blue and red lettering on a white field proudly reflecting the colors of the U.S. flag.  Every letter of the names, TRUMP and PENCE, is capitalized.  Trump’s name, of course, is placed at the top of the logo.  Trump’s dominance is reinforced through a larger font in blue lettering to spell his name than is used to spell the name of his running mate, Pence, whose name is in red lettering.  Below the two names is the motto in smaller blue font, “Make America Great Again!” The logo is presented is a straightforward manner without any symbols or extraneous notations.

The Clinton – Kaine logo has light blue and white lettering on a dark blue background.  Only the first letter of the two names, Clinton and Kaine, in white lettering is capitalized.  Clinton’s name is placed at the top of the logo, but each name is the same font size.  Clinton’s name has seven letters and Kaine’s name below hers has five letters.  Whereas Clinton’s name takes two syllables to pronounce; Kaine takes only one.  Both names start with a hard “K” sounding consonant, offering some resonance.  The Clinton – Kaine logo contains no motto.  Instead, it has Clinton’s campaign symbol; i.e., a white “H” with a light blue horizontal arrow superimposed across it over the dark blue field.  The arrow points to the names Clinton – Kaine.  In addition, at the bottom of the logo in light blue letters is Clinton’s website, “hillaryclinton.com” in smaller font size than the names of the candidates.  In even smaller font size appear the words “Paid for by Hillary for America” within a light blue border.

See also  Jim Rickards: The Battle of the Censors

Overall, the Trump – Pence logo has a business-like appearance, not unlike a businessman dressed in a blue serge suit, white shirt, and a red tie, which is exactly what Trump wore when he gave his acceptance speech at the Republican National Convention.  This is precisely the image that Trump wants to project, consistent with his promise to run our government more like a business than an out-of-control bureaucracy drowning in red ink.  The emphasis on business is reinforced by Trump’s running mate, Governor Mike Pence, who prides himself on running the state of Indiana like a business by reducing taxes and building a budget surplus.  Indeed, the Trump – Pence ticket can be considered an extension of the famous Trump brand ubiquitous throughout the world.  There are no distracting symbols or websites or sponsors on the logo.  It assumes that people can find Trump’s website easy enough online, if they are interested.  The logo does not include a sponsor because Trump is proud to have self-funded his own campaign.  There is symmetry in the names, Trump – Pence, because each name has five letters.  Both Trump and Pence are monosyllabic names.  People like balance and harmony.  Each name contains the same letter “p” which serves as a connective of sorts, linking the last letter of Trump to the first letter of Pence.  Acoustically, the words, Trump and Pence, are short sounds that ping our eardrums without taxing our auditory nerves.

By contrast, the Clinton – Kaine logo contains a lot of unnecessary information.  It’s too cluttered and may remind people of the big government policies with which the names, Clinton and Kaine, are associated.   For example, the inclusion of Clinton’s website and her sponsor is superfluous.  Further, it isn’t evident what the symbol “H” is supposed to represent other than a cute play on the first letter of Hillary’s name.  All of this information appears in two basic colors, white and blue.  The light and dark shades of blue seem to run together at a distance.  The addition of another primary color would have provided the logo more contrast and appeal.

Of course, the effectiveness of any logo is the eye of the beholder.  Each logo stands in isolation when viewed by an observer, who then makes a completely subjective assessment based on his or her viewpoint.

Rest assured, the candidate and his or her professional advisers spent a lot of time thinking about the best logo to put forward for the presidential run.  The logo will stay with the candidates throughout their campaigns.  It is a candidate’s calling card.  The logo flies on banners that are waved at the rallies and will be displayed on buttons worn by supporters across the nation.

To be sure, for ardent supporters of a candidate, logos are simply campaign paraphernalia to be displayed the same way a baseball fan wears a cap or a shirt with the home team’s insignia.  But for people who are not familiar with a certain candidate, a logo will make an impression on them whether they realize it or not.