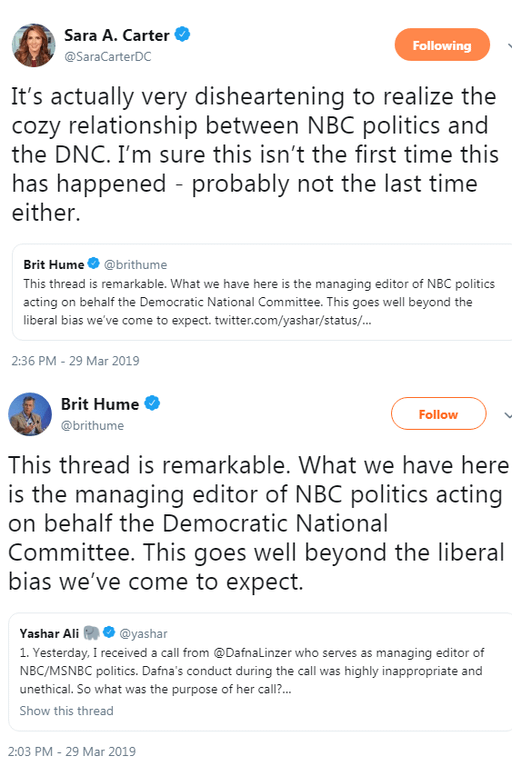 It’s actually very disheartening to realize the cozy relationship between NBC politics and the DNC. I’m sure this isn’t the first time this has happened – probably not the last time either.

This thread is remarkable. What we have here is the managing editor of NBC politics acting on behalf the Democratic National Committee. This goes well beyond the liberal bias we’ve come to expect.

She called me to bully me on behalf of the DNC.

Dafna Linzer is an American journalist. Since October 2015, she has been managing editor of politics for NBC News and MSNBC, with a role spanning broadcast and digital coverage on both networks for the 2016 election campaign. Linzer was formerly managing editor of MSNBC; senior reporter at ProPublica; foreign correspondent for the Associated Press; and national security reporter for the Washington Post. Linzer was a foreign correspondent for the Associated Press, based in Jerusalem. She became a naturalized U.S. citizen in January 2011.

magaimg.net/img/7mhs.png Article 2011 Dafna Lanzer “How I Passed My US Citizenship Test:By Keeping the Right Answers To Myself”
www.propublica.org/article/how-i-passed-my-us-citizenship-test-by-keeping-the-right-answers-to-myself