A bell curve is a useful tool to show how Hillary Clinton’s current email scandal, including potential improprieties associated with the Clinton Foundation, is evolving and how it may ultimately resolve itself.  The scandal centers on whether Clinton broke any laws regarding national security through use of her private email server and whether she traded government favors for contributions to the Clinton Foundation or for lucrative payments to her husband for speeches he made.

Below is a typical bell curve used to reflect a typical distribution of events as they unfold over time. All possible occurrences are equally distributed around the most probable event, which creates a downward-sloping line on each side of the peak. 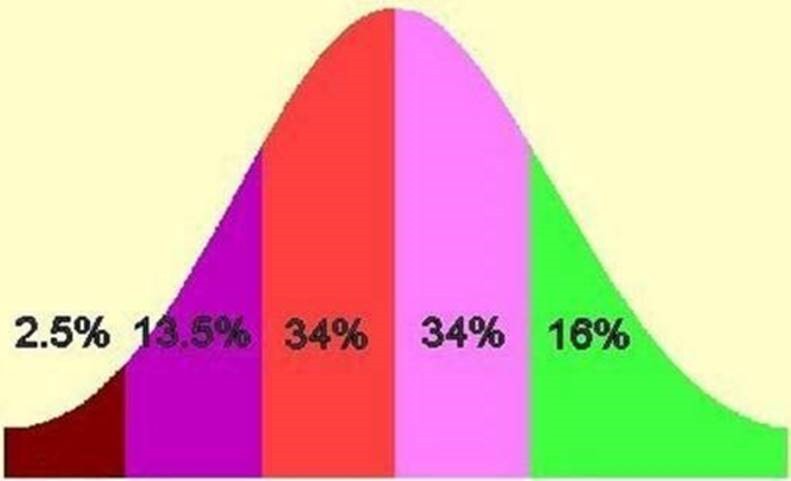 Let’s start at the left side of the bell curve, shaded in brown.  This is the time period during which the alleged scandalous behavior took place, unbeknownst to the public.  By definition, scandals are born and thrive in the shadows.  No one is ever supposed to find out what occurred during the commission of a crime or an ethical breach.  It is a safe zone for the perpetrator.  The activities are never intended to become the approach ramp to a bell curve, which exposes the improprieties to public scrutiny.

The area of the curve shaded in purple is the time period when the Clinton email scandal first emerged and appeared before the public.  The existence of Clinton’s private server first came to light in the summer of 2014 during the Benghazi investigation.  Questions regarding the Clinton Foundation and potential conflicts of interest first appeared in the book, Clinton Cash, by Peter Schweizer.  Both events brought public attention to potentially unethical, if not criminal, behavior on the part of the Hillary Clinton.  As the budding scandal emerged, it drew increasing attention from the media, the public, and law enforcement authorities.

During the red portion of the scandal, more details surfaced as congressional, media and law enforcement investigators uncovered additional evidence supporting allegations of questionable conduct.  More than 2,000 of Clinton’s emails have been deemed classified, of which 22 are considered top-secret.  Making matters more troublesome is the fact that a full-blown FBI investigation, involving up to 150 agents, is taking place in parallel with Clinton’s presidential bid.  Other players within Clinton’s circle have been drawn into the scandal and have been interviewed by the FBI.  If crimes were committed, it is possible that some Clinton aides may decide to divulge what they know about the scandal in exchange for leniency.

The crest of the bell curve, indicated by a transition from the red to pink shaded area, is where the matter reaches a turning point and begins to resolve itself one way or another.  The Clintons, in the past, have been able to navigate across this delicate threshold by simply letting the march of time lance the boil.  As other newsworthy events take center stage, the scandal recedes slowly but surely from the public’s eye.  The Clintons count on the public’s short attention span to win the day.  As long as no criminal charges are filed against them, they know that the public and the media, as well as congressional committees investigating them, will grow weary as the scandal becomes yesterday’s news.  If the government doesn’t take criminal action against the Clintons, the public will conclude that the whole affair was much ado about nothing.

See also  Email scams on the rise. Protect Yourself!

Interest in the scandal dissipates as it slides down the right side of the bell curve until it reaches the shoulder of the curve, shaded in green.  At that point, the scandal becomes one more entry in the long list of prior Clinton scandals, and the Clintons once again ride out the storm.

On the other hand, the bell curve could play out in a way inimical to Hillary Clinton.  We aren’t sure yet, but the transition from red to pink, could evolve in a completely different way.  The crest of the curve could be the point where the Justice Department indicts Hillary Clinton on various criminal counts relating to her private email server and/or conflicts of interest involving the Clinton Foundation during her tenure as Secretary of State.  Any serious negative development, backed up by hard evidence, stemming from ongoing criminal and congressional investigations or from some other source could also be the catalyst marking the peak of the bell curve.  If Clinton is forced to terminate her candidacy for president, it would begin an unwelcome slide for her down the right side of the curve.  As she approaches the right shoulder of the curve, she will slowly fade from public view as she deals with the fallout of the scandal and law enforcement authorities.  Under this scenario, she would enter the green zone potentially facing jail time and/or public disgrace.

So, where is Hillary Clinton right now on her journey along the arc of potential disgrace?  Unfortunately, no one can say with certainty where Clinton is on the curve at this point.  Only in retrospect, when the entire spectacle plays itself out, can one see what position of the curve she occupied at a particular point in time.  Until then, it’s like trying to see the forest through the trees.  Nonetheless, we can take a snapshot of a theoretical curve in progress and try to guess at which point her scandal stands at this particular time.

It appears that Hillary Clinton may have successfully weathered the worst of the storm and is just beyond the peak of the bell curve, starting her descent down the right-side of the curve along the slope of the pink zone.  She is not out of the woods by any means, but things look promising that she will emerge from this scandal bruised but unbloodied.  Clinton and her supporters are buoyed by recent events.  She vanquished Sanders in their Democratic primary battle, she will be officially named the Democratic Party’s nominee for president next month, and the FBI’s investigation into her emails and the Clinton Foundation is going nowhere fast.

The most encouraging sign that she will not be indicted for any crimes came when President Obama gave Hillary Clinton a ringing endorsement after she won the Democratic Party primaries and became the party’s presumptive nominee.  For a sitting president to endorse a candidate for president, who is under an active criminal investigation, is not only unprecedented, it is also a conflict of interest that could very well intimidate FBI agents who are involved with the Clinton probe.  Indeed, Clinton is so confident that she faced down the FBI on national TV, saying there is no way she will be indicted.  At this point, it would be naïve to think Obama’s Attorney General, Loretta Lynch, would ever indict her own party’s presidential nominee, who has been endorsed by her boss, and could be her new boss a few months hence.

See also  VIDEO: Update on Train Tracks FILLED With Amazon Packages Looted and Undelivered 'As Far As the Eye Can See'

Therefore, isn’t it safe to assume that Hillary Clinton will escape punishment for what many observers consider to be an open and shut case of criminal misbehavior?  It sure looks that way.  But there are many flies in the ointment that could send Clinton backward toward the crest of the bell curve to its inflection point.  Hackers, who might have captured all of the Clinton emails that she thought she deleted, could publish incriminating emails on the internet blowing the scandal sky-high.  Clinton’s aides could cop plea deals with prosecutors in exchange for damaging evidence against their former boss. New details of criminal wrongdoing could emerge from Judicial Watch’s civil lawsuit, where Clinton’s emails are being sought under the Freedom-of-Information Act.  Donald Trump could light a fire under the Clinton scandal, which could incite public indignation that the mother of all cover-ups is taking place at the U.S. Justice Department in the Clinton case.  Donald Trump could win the presidency and appoint a new Attorney General who will pursue charges against Clinton free of Democratic Party interference and intimidation.  Even if Clinton is elected, how does she make her case go away without drawing attention to the scandal once again?  Or, maybe, just maybe, the U.S. Justice Department and the FBI will actually do their job and hold Clinton to account just like they would any other American citizen.  In addition, there may be other factors that could appear out of nowhere to blow Clinton out of the water.

Clinton’s journey across the arc of the bell curve is still a work in progress.  Clinton, at this point, seems to have the advantage.  After all, scandals are nothing new for her and her husband.  They have gone through this before — many times.  If all the bell curves of Clintonian scandals are laid end to end, it would form a very long rollercoaster of shame.  The Clintons are masters at riding the rollercoasters of scandal that they create.  Figuratively speaking, they are on a roll in that respect.  And time after time, they come out smelling like a rose, as Lady Justice takes a powder.  If past is prologue, it should happen again.

Only in hindsight will we know if Clinton cackles her way over the bell curve into the green zone, and lands on her feet inside the White House.  The ride is not over by any stretch of the imagination.  And, if it ends in another Clinton triumph over our justice system, you can be sure another bell curve of scandal lies straight ahead.