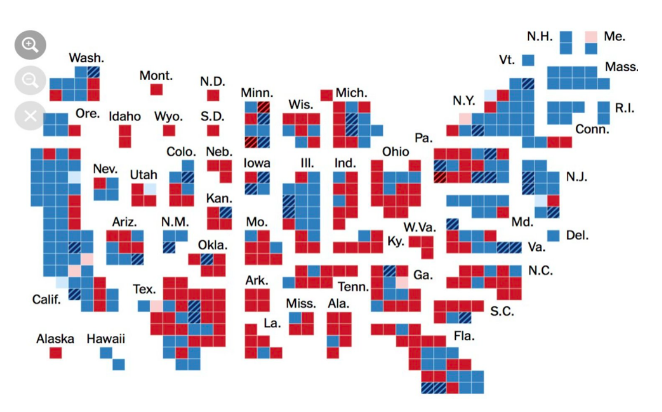 Many Democrats want to start impeachment proceedings on President Trump as soon as January 2019 now that they’ve won the House. Other Democrats want to focus their subpoena power on investigations regarding the president’s taxes, hush money payments, and the witch hunt Mueller investigation. Will they go down one of these combative routes now that they have taken back the House? Or will they try to get something done in Washington and create an atmosphere of pragmatic bipartisanship to make their side look more palatable in the runup to the 2020 presidential election?

“This is a constitutionally perilous moment for our country and for the president,” said Democrat Jerrold Nadler, who is likely to become chairman of the House Judiciary Committee next year. Jeff Sessions is finally out the door and Democrats are already convinced that this means the president is moving to end the Mueller special counsel. Still, Nadler and other House Democrat leaders are stopping short of using the impeachment word. The base is shouting for Trump to go but smart Democrats know that would surely backfire against them, as it did for Republicans during the Clinton era. These unhinged leftists want impeachment despite the fact that it is essentially impossible that Trump would be impeached with the Republicans holding onto the Senate, increasing its majority last week.

“Now is not the time to consider impeachment,” Representative Steny Hoyer of Maryland and the Number 2 House Democrat, said recently. “Special Counsel Mueller must be allowed to complete his investigation. The president’s decision to ask for Attorney General Sessions resignation underscores the need for Congress to take action to protect that investigation.” So Hoyer is simply seeking to put a check on the president’s supposed dictatorial power in relation to the Mueller investigation, nevermind the fact that Mueller has come up with zero evidence linking the Trump campaign to Russia in any conspiratorial fashion over the last 18 months.

The new liberal leaders of the House are likely to call hearings and issue subpoenas to put the spotlight back onto the Trump campaign “collusion” with Russia narrative. Once that fails, they will inevitably go back to the obstruction of justice angle.

For now, at least, the Democrats are hesitant to start down the road of removing Trump from office. It is surely a step too far, though their base clamors for it, ignoring the obvious impossibility of it happening at this point. House leaders like Hoyer and soon to be speaker Nancy Pelosi appear to be hesitant in initiating a constitutional showdown to remove a duly elected president from office. For now.

Pelosi did make clear that the newly emboldened Democrats in the House will immediately “let the subpoenas fly” come January. We know the Democrats will do everything they can to investigate Trump’s business ties with foreign entities and will certainly attempt to subpoena his tax returns. Another likely avenue they’ll venture down is the FBI’s handling of the last-minute Kavanaugh background check, attempting to prove interjection by the White House or Senate Republicans.

Adam Schiff, the new House Intelligence Committee Chairman come January, revealed that House Democrats will also look into whether Trump’s so-called “war on the free press” has resulted in the president committing crimes. What evidence he has to get this going is beyond me. The latest removal of CNN’s Jim Acosta from the White House briefing room likely spurred this new line of attack from the Dems.

But here’s the most important action the Democrats will take when they are back in charge of the House: they will bury the other Russia story.

Schiff will shut down the probe that has found FBI corruption and rampant abuse of power in 2016.

Last Friday, the Wall Street Journal’s editorial board wrote a piece about the Democrats’ plans to cover up the crimes committed by our nation’s highest law enforcement branch. With Schiff at the head of the House Intelligence Committee next year, “his top priority is re-opening the Trump-Russia collusion probe, but more important may be his intention to stop investigating how the FBI and Justice Department abused their power in 2016,” the Journal’s editorial board wrote. Forget what they’ve done because the mainstream media has conveniently failed to cover this story? Let’s walk through it.

House investigators have unearthed “a Democratic scheme to prod the FBI to investigate the Trump campaign. We now know that the Hillary Clinton campaign and the Democratic National Committee hired Fusion GPS, which hired an intelligence-gun-for-hire, Christopher Steele, to write a ‘dossier’ on Donald Trump’s supposed links to Russia,” the WSJ’s editorial board wrote. This is what put the whole Mueller investigation into motion. Clearcut politically motivated abuse of the surveillance state.

Steele then fed the fake dossier to the FBI. Fusion GPS also sent the dossier to senior Justice Department official Bruce Ohr. His wife, Nellie, worked for Fusion. The FBI failed to look into the source of this dossier and used it to obtain a FISA warrant against Carter Page, then an aide of candidate Trump. The FISA warrants relied entirely on the Clinton-backed accusations in the dossier and a planted news story by Mr. Steele.

The FBI said to the FISA court that Steele was a “credible” source, even though he admitted to Ohr that he outright opposed a Trump presidency. The FBI conveniently did not disclose the crookedly political source of the dossier. Furthermore, this blatant abuse of surveillance power by the FBI was hidden from Congress. “Such an investigation is unprecedented in post-J. Edgar Hoover American politics,” the Journal declared, “and it included running informants into the Trump campaign, obtaining surveillance warrants, and using national security letters, which are secret subpoenas to obtain phone records and documents.” Yes, Obama was spying on the Trump campaign. Better believe it. I wrote at length about Spygate back in May in a three part series (Part I, Part II & Part III).

When Schiff takes over the committee, the House will stop asking these important questions and the FBI will get away with it all. President Trump needs to declassify pertinent FBI and Justice Department documents before Schiff buries it all. Trump recently decided to release some important documents, but then decided not to after pressure from Deputy Attorney General Rod Rosenstein and members of the intelligence community.

Trump must release the documents now so we may finally find out the depth of the FBI’s politically motivated actions in the final months of the Obama presidency. It needs to see the light of day. The real collusion story must be told for those still in denial about what the FBI and Obama/Holder Justice Department really did. House Republicans must finish the job in these next two months so we can finally hold the intelligence agencies accountable for their outright abuse of surveillance during a political election to ensure it never happens again.

House Democrats will take the fight to President Trump in a couple of months. But they will learn, if they haven’t already, that he knows how to fight back. Think we’re divided now? Just wait until next year.