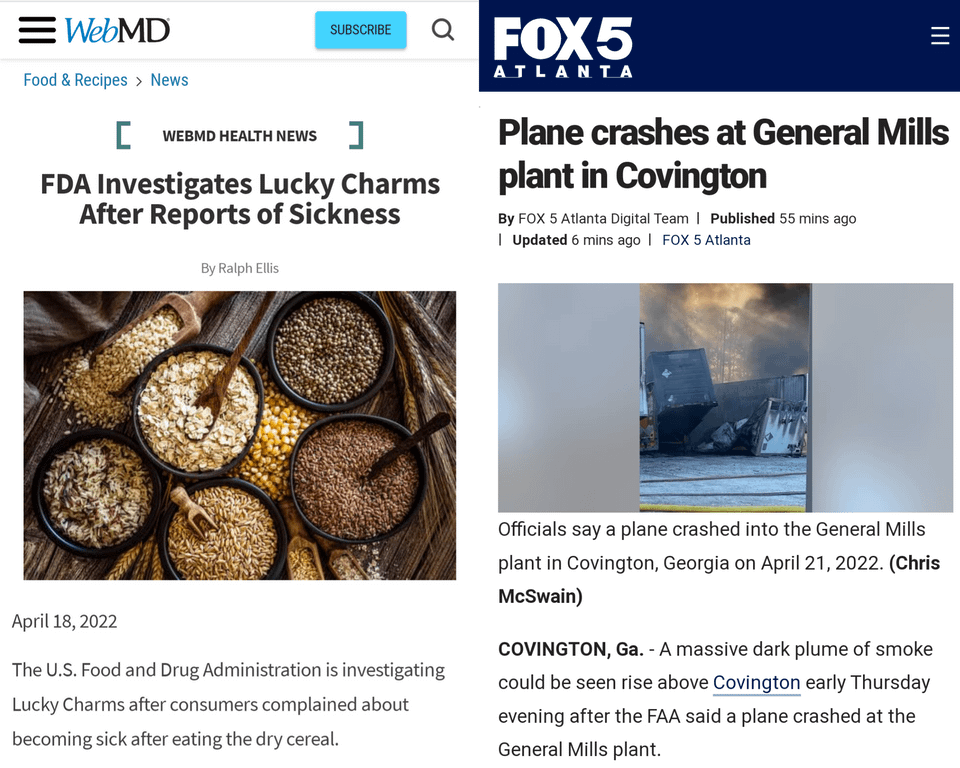 After reports of children getting sick after eating General Mills Lucky Charms cereal, the FDA announced it would investigate. 3 days later, a plane hits a Georgia General Mills factory.

The FDA is investigating Lucky Charms after reports of illness

The U.S. Food and Drug Administration is investigating Lucky Charms cereal after dozens of customers complained of illness after eating it.

The FDA said Saturday it has received more than 100 complaints related to Lucky Charms so far this year.

“The FDA takes seriously any reports of possible adulteration of a food that may also cause illnesses or injury,” the agency said in a statement.

General Mills Inc., the Minneapolis-based company that makes Lucky Charms, Cheerios and other cereals, said it’s aware of those reports and takes them seriously. But the company said its own investigation has not found any evidence of consumer illness linked to Lucky Charms.

The FAA said an “unidentified small plane” crashed around 7:05 p.m. at the plant located at 15200 Industrial Park Blvd. NE. It is about eight-tenths of a mile southeast of the eastern edge of the runway at Covington Municipal Airport.

Officials did not have too many details about the crash, but said it happened shortly after takeoff.

Photos provided to FOX 5 Atlanta shows a plume of thick heavy smoke coming from the plant and several tractor trailers damaged. Fire crews could be seen extinguishing the blaze.

The crash appears to have been outside the plant, but the extent of damage has not been fully assessed.

It was not immediately clear if anyone was injured in the crash.

General Mills is having a pretty bad week.